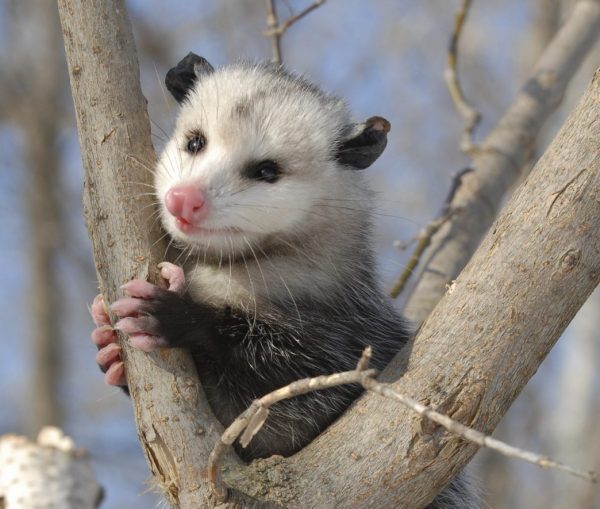 The Zombie Possum of Division Street

I’d like to tell y’all a tale of a little brown and white dog named Nutmeg. Nutmeg owns my friend Margaret. Nutmeg came into Margaret’s life about a year ago after one of Margaret’s other four legged owners, Tank, crossed the Rainbow Bridge to doggie heaven. It took Margaret a while to decide she needed another pet (or owner as I’m sure Nutmeg would say were she possessed of the capability to speak English) but when she did, Nutmeg stepped up to the plate and ran off down the street with Margaret’s heart.

Of course, her big sister, Squirt, was a little uncertain at first about this puppy intruder into her domain, but Margaret and she had a conference and Squirt decided Nutmeg could stay if she learned to show her the proper respect.

Well, that didn’t last too long, but Squirt is a good natured, mature lady so she made allowances and peace reigned supreme.

Margaret took Nutmeg out for her evening constitutional one night and being the curious young dog she is, Nutmeg patrolled the perimeter , doing credit to her breed. Then out of the darkness, there arose from the bushes at the edge of the yard a most fearsome opponent, the likes of which young Nutmeg had never seen! It was of small stature, grey in color, with a long nose and tail and it had the audacity to talk back to Miss Nutmeg! Well, of course this disrespect was intolerable, so immediately the intruder received a swift punishment from Princess Nutmeg, Fearless Possum Hunter extraordinare. And proud of her conquest, she of course brought the intruder into the house to show her mother, who she expected would also be proud and pleased.

Margaret was… shall we say… startled at this offering of love from her darling Nutmeg, not to mention a little upset because even though we Southerners see dead possums all the time in the road, coming this close to one was never on Margaret’s bucket list. So, Margaret placed the teenage possum’s sad little corpse out by the bushes from whence it came, in case the family wanted to come fetch it for a proper burial. Nutmeg pouted a little, but when Mommy explained to her why Mommy did what she did, she accepted the outcome, yet still remained vigilant.

The next day, Nutmeg needed to go out to do what dogs need to do, so Margaret did a quick recon mission in the bushes to make sure the possum corpse was out of the way in case Nutmeg decided to exact some revenge on said dead possum The possum was gone. True to its nature, it had the night before presented an Oscar worthy dramatic performance and, once removed from the domicile of its “killer”, had beat feet out of the cornfield and hauled possum butt home to regale its relatives and potential possum mates with tales of its narrow escape from the literal jaws of death.

Margaret figured that was the end of the story, even though Nutmeg remained on possum watch for the next few days.

Alas, possums (at least teenage ones) are not that smart, and the next night Margaret witnessed her dog coming through the door WITH A TEENAGE POSSUM IN HER MOUTH. And as Margaret stared in shock and disbelief, Nutmeg trotted out of sight to her doggy bed with her prize. Margaret heard a crack.

She creeped over to Nutmeg’s dog bed with some paper towels to act as a shroud for the (now sure to be, she hoped) dead teenage possum. Wrapping them with care around said possum corpse, she again placed it outside by the bushes. There was a spot of blood on the doggie bed so she was definitely sure the possum was gone to Glory.

The next morning, Margaret happened to glance over at the bushes that had served as the mausoleum of the previous night’s possum kill….AND THE POSSUM WAS GONE.

So either she now has a zombie possum wandering around her Division Street neighborhood or Southern possums have evolved into having nine lives similar to their feline bretheren. Only time will tell.