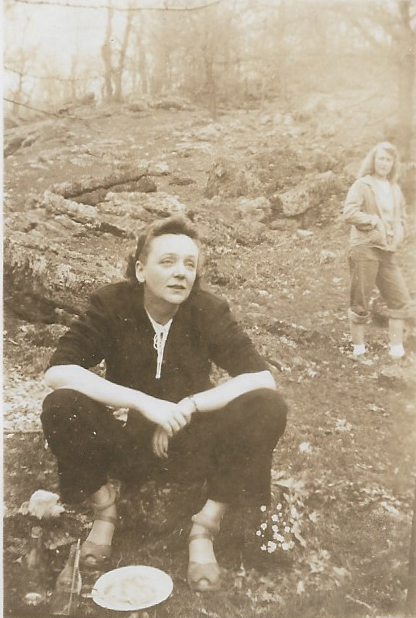 Southern Legitimacy Statement: David Tromblay lived in a single wide trailer on a piece of leased land somewhere on the Fond du Lac Reservation until his parents split up. Before earning a BA in English and Writing from UW-Superior, he served in the U.S. Armed Forces for ten years, deploying to Iraq, Africa, and Eastern-Europe. Currently an MFA candidate at the Institute of American Indian Arts, his stories have appeared in The Nemadji Review, Yellow Medicine Review, Open: Journal of Arts & Letters, and Watershed Review.

You’re not thinking straight. Your first memory is not when the wolf pups bite at your ankles and pull your shoes and socks off your feet. That’s just the first thing that pops into your head when you’re put on the spot. No, your first memory must be when you are toddling around Grandma Lynn’s kitchen. You get curious and want to know what she is doing, so you get right up next to her—inches from her butt—and right as you do she bangs a can of biscuits against the edge of the counter hard enough for them to burst open.

The noise they make coupled with the fact that the can explodes just a few inches from your nose is enough to scare the shit out of you. You are still in Pampers, which is lucky for you because you fall to the floor with a fresh turd squishing between your cheeks, and you start to cry. It’s your own fault for walking around like a damn cat all the damn time, but Dad’s head pounds once he finally does make it home so you learn to tiptoe around the trailer so you do not disturb his beauty sleep, but you’re just a little boy, and sometimes you forget, so Mom plops you down into the playpen and there you sit with your back against the screen mesh until lunch time and then dinner time and then bedtime until the doctor says you have a curvature of the spine. But your crying on the kitchen floor gets drowned out by Grandpa Bullshit’s laughing. He sits and watches the whole thing play out. He knows what is coming, but he thinks it’ll be funny as hell, so he doesn’t say a thing. His laughing turns to coughing which turns to phlegm coming up and he makes his way to the spittoon he keeps next to the bed for such occasions.

That would be the same spittoon Mom talks about in another story.

In that story, she tells you about how you act out at their house because you can’t at hers, so she finds you playing in their bedroom, and like all moms, she tells you not to jump up and down on a bed, but instead of breaking your neck, you bounce all over the bed until you slide off the edge and land feet first into the spittoon. She gags when she tells you this part of the story.

Back then when she is cleaning her father’s phlegm out of your hair and from between your toes and the creases of your chubby little legs you can’t stop giggling because it’s tickling you and it’s sickening her each time her hands slide across your slick skin and her fingers find another glob of Grandpa’s phlegm and finally it becomes too much for her to handle and she starts puking all over you and the shower is spraying down so you are sliding all over the tub and giggling while she’s grabbing for you, trying to get a hold of you, trying, and getting sicker and sicker each time she touches you. And that must have been when you were pretty young because Grandpa Bullshit died the day you turned two.

The next summer, the summer right before you turned three is the first summer you lived with Grandma Audrey. That is the summer you got into a bucket of roofing tar someone left out after they finished putting shingles on the new outhouse. Of course it is up at the cabin and in the summer, meaning: it’s warm outside, so you are in a pair of Underoos because they are just as good as swim trunks because they have designs on them, so the tar gets everywhere. Everywhere. And you try to run to the lake and wash it off but, like a good dog, Scrappy won’t let you go more than knee-deep out into the water because you’re so little, so Grandma Audrey is able to get a hold of you, but she doesn’t wait for it to dry so it can be peeled off you. Instead she sits you in a plastic tub with some scalding hot water and scrubs you down with a Brillo pad and your big sister comes into the kitchen when she hears you screaming. No one knows what she is doing until she is doing it and there is no way of stopping her, even when your sister’s screaming joins in a chorus with yours and that does nothing but make your sister so upset she gets sick and pukes a little too, so she runs off into the woods beside the cabin and hides in the little fort she and some of your big cousins built, and there she stays until your crying can no longer be heard coming from the kitchen in the cabin.

There are no witnesses who can tell you how long it went on, or if she took breaks, or if your tears caused her tears. No one stuck around to witness that scene, save the green ceramic frog that sat speechless on the side of the sink with mouth agape.