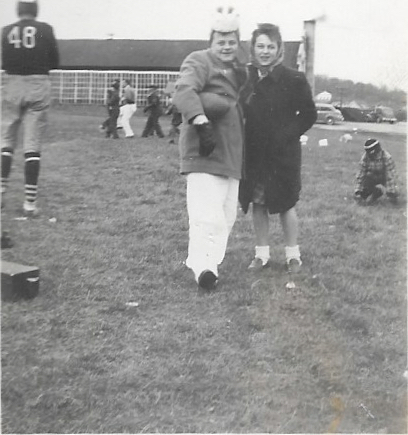 Southern Legitimacy Statement:  I live in Southern Illinois. Yes I know Illinois is a Yankee state. Hear me out. First off, the regional newspaper capitalizes the S in Southern Illinois because we are an area distinct from the rest of the state, geographically and culturally. I live in Dongola, way down there at the bottom of the state map in the Southern Seven counties. I go north to go to parts of Kentucky. And, my home is Resurrection Mule Farm. Here’s the story. A farmer was plowing with his two mules and a storm came up. A lightning strike hit them and appeared to have killed all three – but one of the mules jumped up, alive! According to locals, he was never quite right after that. Anyway, I heard that story and immediately christened Resurrection Mule Farm. My fiancée realized it was go-to-the-bank-time right then. He writes songs.

“You should go.”
“Ain’t nobody wants me there.”
“It’s your daddy’s funeral. It’s about respect.”
“Ha. Right. Respect. When’d he ever show me any.”
“It’s your daddy’s funeral.”
“I haven’t got no way to get there anyway.”
“Take Biff’s car.”
“I am not going to my daddy’s funeral in my girlfriend’s husband’s car.”
“Why not?”
The way she said it with her blue eyes open so wide it seemed like the most reasonable thing in the world.
Darlene was lying on the bed with her feet on the pillows. Jimmy was sitting on the TV stand. Darlene rolled over onto her back, raising a naked leg to rest a red-toed foot on the headboard.
“I think you should go.”
“Maybe he left me some money.”
“It isn’t always about the money.”
“It’s always about the money. And you’re coming with me.”
“Oh no I ain’t!”
“Honey, you can’t always get your way.”
This time when she said “why not” it didn’t work on him.
***
Jimmy and Darlene drove to Jimmy’s daddy’s funeral in Darlene’s husband’s El Camino. Darlene figured he’d be less mad about that than if she took the Chevy 4×4.
“I’m going to report it stolen!” Biff told her when she’d called him from the state line.
“No he is not going to report it stolen,” Darlene told Jimmy when he seemed concerned. “Just for God’s sake don’t crash it.”
“I ought to just because you said that.”
***
They got there in time for visitation. It was a long line. Out the door. Darlene shrugged and said she’d seen longer lines. Jimmy said the amusement park lines don’t count and she was play-punching him when his mother walked outside and saw them. Her eyes were puffy and her nose was red but her hair was stiff and flawless. Jimmy tried to slouch, act like it didn’t matter, but he went to her and hugged her and introduced Darlene as his “friend” and Darlene didn’t say anything against that right then.
***
Darlene sat in a chair by the TV where the funeral home had a slide show of old pictures going and some of Jimmy’s daddy’s favorite songs playing, most of which seemed to be whiny old country songs. Darlene smiled at all the pictures with Jimmy in them as a little boy. He hadn’t changed much. His older brother was better looking than him, she decided.
Darlene watched the whole thing three times through before she went out for a smoke and discovered Jimmy had gone. She called him and he told her to come to the bar across the street and down the end of the block. She was angry, having to walk in her high, wobbly shoes, wondered briefly if Jimmy’s older brother might give her a ride.
“He didn’t cut me all the way out, Mom said,” Jimmy told her. Darlene asked the bartender for a SoCo and cola and told him Jimmy was buying. “But it all goes to her, mostly.” Darlene nodded. “He didn’t say anything about the .12 gauge I got him for his birthday. I should get that gun.” Darlene didn’t say anything. “It’s a Mossberg, nice gun. Won it in a raffle. Got some custom work on it and everything. He didn’t say nothing about that. But he made sure he mentioned the goddamn set of duck decoys Thomas made for him. Those go back to Thomas. You think I get any kind of mention for giving him that gun?”
“Well,” Darlene said, watching Jimmy out of the corner of her eye as she spoke, “I guess probably you should get the gun.” It was the right answer.
“Damn straight I should get the gun. It goddamn well better not go to Thomas. That old man better not have sold it.”
***
The gun in question was in a locked gun display case in the basement. The duck decoys were on the mantel in the living room. After the funeral, when everyone was at Jimmy’s mom’s house, Thomas took the decoys down and put them out in his shiny new never-used-for-work pickup truck. The mantel looked empty without them. Darlene decided Thomas hadn’t aged real well.
***
Jimmy asked his mom for the keys to the gun cabinet. She said she didn’t know where they were. They stayed the night. Late at night, Darlene heard the sound of breaking glass. She knew what it was. They left before Jimmy’s mom was awake, the Mossburg in a case behind the seat.
“You got what you came for, I guess?” Darlene said.
“Not yet.”
They drove back into town, through it to the next one. Not, Darlene noticed, in the direction of home. Jimmy checked a piece of paper and pulled into the driveway of a nice house in a neighborhood full of nice houses. Thomas’ truck was parked there by a Lexus.
Jimmy got out of the El Camino, reached behind the seat, took out the Mossburg. “You’re right, honey, it ain’t always about the money,” he said.
Darlene sat there in the passenger seat waiting for the gunshot.