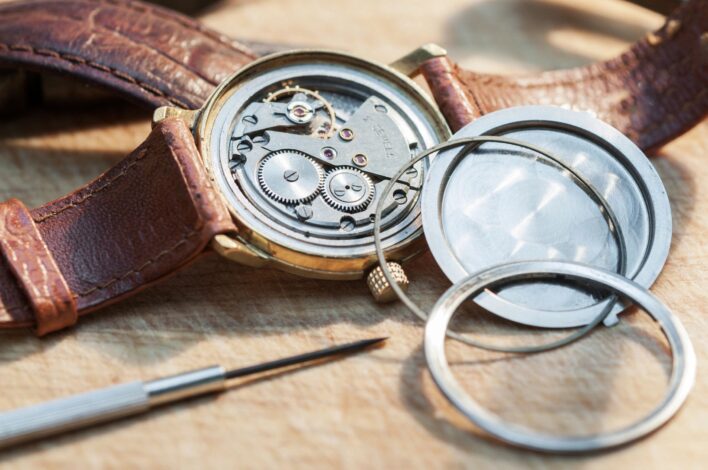 Granny Cass’s watch stopped long before she died. Its placid moon face stood cold against my ear, silent. I fingered its white, fake-leather strap, and with my thumb flipped the tongue of its gold-plated buckle. Along with everyone else, I pretended, to ignore the smell of her death one flight up from the fanless kitchen. But my fingers kept finding their way to the watch, winding it up, willing the glass-trapped hands to move, the parts to tick.

“Anna, you gonna drink your tea there?” Mama asked. She wanted me to do something else with my hands, something to shift everyone’s attention away from the TV. I set down the watch and took the tea. The alkaline tang of the bitter leaves greeted my mouth, barely masked by the half-bag of sugar.

Certainly Mother had not set out the tea for me; nor the refrigerator of casseroles and tubs of fried chicken, the stretches of cakes and pastries on the countertop. I was glad of it. Six months earlier, these same throngs of aunts and cousins sat at our oval oak table, sitting witness to me opening their gifts on behalf of the baby inside me that nobody wanted me to have, and that no one wanted me to get rid of.

“Love the sinner, hate the sin,” Aunt Sarah said at least twice during that party. Cassidy Penelope was born a month later.

Now, sixteen of us stuffed in that sweltering kitchen, convening to mourn the death of my mother’s mother, watching Porter Wagoner reruns. No one spoke of my grandmother upstairs in her bed, or the stench cast throughout her house. No one ate after the men left for the bar, although a few cousins and my sister Carla picked off the chicken skin Mama set out. They’d strip the breading clean from the flesh and eat it, lick their salty fingers, and brush unseen crumbs from their lap, balling napkins in their greasy fists as though it never happened. I didn’t touch the chicken, wouldn’t, either, until they left. As the summer night grew dark our lamp porch glowed gold. No one had turned it on; it had been on all day without our notice.

Carla stripped a second chicken leg when mother barked over the din of the set, “Who’s there?” toward the screen door, toward the hunched shouldered male-form, peering into the house. The face appeared in relief from the porch light, casting color on sweaty cheekbones and a forehead pressed against the screen. His dark suit proved later to be russet in color, and he clutched a paper bag. I hadn’t heard a knock; no one had. His left hand was poised mid-rap when Mama spoke.

“About to knock,” Mr. Potts said, in a smile that I’m sure pained him.

As the only undertaker in three counties, Mr. Potts had returned directly from his Florida holiday with a face so red from the sun he could barely smile in that sad, undertaker way. Still he managed, “I’m sorry for your loss, Mrs. Arlen.” You could see the white lines in his jowl when he stopped smiling and already flakes from his reddened dome of a scalp mingled with his wisp of a hairline.

“You’re here now, and that’s what matters,” Mama said. She opened the refrigerator. “Would you like any cake?” as my aunts rose up to talk over, as they called it, “the situation upstairs.” Granny had died in her sleep: the good way, the best of ways. Everyone said so. No doctors or feeding tubes; no machine forcing air into your lungs, willing your heart to work; no unfamiliar setting to contend with when your soul finally released.

All day I’d wanted to point out my aunt’s lack of logic. Because, isn’t it true, that, even if Granny died walking down the street or up in a tree, she’d be “right where she was?” But I held my tongue and instead thought of my own baby girl sleeping upstairs. The baby lay one room over from her great-grandmother. Each shrouded in sheets, and each sharing the same name: Cassidy Penelope. I picked up the watch and stretched out its strap, as I thought about the elder Cass, then the younger, feeling the tiny craters of the unused holes, the darkened indent where the fake gold clasp attached. One hole, three notches in, was larger and stretched out to accommodate Granny’s thin wrist. I tried it on. The circumference of my wrist was two holes bigger, and at least ten holes larger than Cassidy Penelope. I know because I’d tried already to fasten the watch on the baby’s wrist. Just to see.

“It’s already broken,” I said. “She wore the watch for years and it never worked.”

“It worked at some point,” Aunt Sarah said. “Else why would she wear it?” She reached across the table of cold food and grabbed at the watch. As though I were ten, not sixteen. I glanced at my mother, still talking business with the undertaker. My cousins for once quit stripping the skin off the fried chicken to see what I’d do.

“I should go check on the baby,” I said. I stood, dangling the watch just beyond my aunt’s meaty grasp, and left the room. As I started the stairs, I heard Aunt Sarah say, “Who takes a watch from a dead woman’s wrist?” I let her comment pass, because it was partially true and because I knew not to sass my aunt in front of company. But I took each step double up the staircase, booming footfalls, demonstrating I was moving away from them, away from the drone of the television, from their hushed, angry voices, toward dear baby Cassidy.

The house I grew up in is near a crossing called Mewborn, North Carolina. Beyond the loblolly pine grove are acres of overgrown farmland and each spring generations of seeds sprout uninvited through the crabgrass and the burrowing tunnels crafted by voles and rabbits. When I was younger, I’d sometimes imagine dropping myself deep into one of those holes, Alice in Wonderland-style, and lose myself in their underground network. Not long after Daddy died, when I was three, Mama and Carla and I moved in with Granny, who fell ill about two years ago. Everyone said she’d lost her mind early, that losing her only son in Vietnam, and her husband in that car accident two years later, took its toll on her brain. She was not the wandering type, thankfully, one of those old ladies in bedclothes found out on the state highway. Thank goodness for that. But wandering’s what killed her in the end. A wander straight into little Cass’s room is what, in the end, broke her hip and killed her heart.

For years, I’d bound up the stairs and into my grandmother’s room to visit. I could tell her anything. She never said a scolding word. Never tsked when I told her about failed test or a situation with a boy or my friends. When I was pregnant, she put her hand on my belly and spoke gibberish about the “angel within, waiting to get out.” She never made much sense, but I liked that at least her attitude toward the baby—unlike everyone else I knew—was one of love. So when the baby was finally born, naming her Cassidy felt natural; it was the name of someone who loved the idea of her, perhaps even more than I did.

When I got to the top of the steps and opened the door to Granny’s bedroom, I hadn’t expected that the smell of her remains could grow worse, but I was wrong. I covered my nose as I opened the door. Mother had set both house fans around her, in a game attempt to push the stale air around the room. She’d kept the shades drawn to keep out the sunlight heat, but now that the sun had set it had the opposite effect. Holding my breath, I lifted both shades, opened the windows wide and leaned out, to breathe oxygen untainted with rot. Even the evening, with its cloud-streaked sky and dark abyss of the woodland acres, lent no release. I willed away my gag reflex, catching in the dark the form cloaked head to toe in a white sheet. The stuff of ghosts, I thought, imagining her soul, trapped by bedding, might rise and take form beneath them. Granny would have never been that kind of ghost. I knew she believed in them, said she’d seen them, talked to them, from time to time.

I took out the watch stuffed in my jeans pocket and held it up to my ear. Maybe it did belong with her. I glanced toward the door. Mr. Potts would be up here any moment. But I wanted to see my grandmother, one last time, to tell my daughter about it, to remember all I could about her namesake. I turned on the light closest to the bed, a dingy 40-watt bulb that barely lit the room. I hovered over Granny’s bed. Mother had left her in her nightclothes, said she didn’t want to disturb Granny from her resting place. I’m sure it was because she couldn’t handle the body well. Nylons catching dead toenails, seams ripping around an elbow that refused to bend. I could not blame her. The sheet now, seemed to be damp in places. I took hold of the sheet—which mother kept calling the shroud—and folded it back with all the ease of someone unaware of what awaited her. M

My grandmother and my mother had once shared the same nose, but no longer. Her face had distended some from the heat and her entire form had bloated. Her wrist had swollen to twice its size and I knew I couldn’t return the watch, even if I tried. The strap wouldn’t reach.

Just then, the somber eyes of our ancestors in photographs in twinset oval frames came into view on the wall above my grandmother’s head. Finally the open window served its purpose, because I found myself hanging out of it, stomach empty save for the bile, and that’s all that came up. I drowned out everything, eyes fixed on the darkness, until I heard my mother’s voice mingling with my daughter’s cries. I turned. It was Aunt Sarah, eyes ablaze.

“You ain’t got no business in here,” she said. “Get on out to your mongrel.”

“You want to talk mongrel?” I said, “Go watch your daughters eat the skins of chicken.”

It’s beside the point to say that she slapped my face for my sass, and called me a “no-good whore,” no doubt waiting for a long time for the chance to do both. And to my surprise, I slapped back. One solid slap echoing another, and the glower of red on my face held longer than it took for me to reach my room, where little Cassidy hungry for her milk fell silent in my presence. We sat together in the dark, rocking, her mouth on my breast, the whir of the tiny fan nearly drowning out the voices vibrating through the wall, the opening and closing of drawers and closets. As I clutched the dead watch in the dark, I imagined the undertaker’s skin flaking on the bed sheets, my mother and Aunt Helen fussing over which dress, already in the mindset of who gets what. And yet here was Cassidy, each thump of her little heart coursing through my fingertips, each beat a reminder that we would, and must, move on.