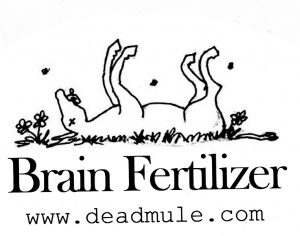 “No good Southern fiction
(poem, essay, memoir)
is complete without a
Dead Mule”

Online since 1996, the Dead Mule School of Southern Literature represents the best, the finest, the most comprehensive compilation of original contemporary literature on the internet. Not kidding, 24 years online gives us bragging rights over most every other online journal.

Our publication credo? Provide readers with the best writing we can find on a consistent basis, month in, month out. Since 1996, can you believe it? *see bottom of page for creative commons information

We’ve hosted writing by poets laureate, mule skinners, horse traders and hornswagglers. While currently focusing our attention on the monthly publication of new material, we have little HTML elves working diligently in the background restoring the “hacked” database from the 1996 through 2006 and that writing will be available in the future, once again, on the Mule.

Okay, that’s just a little sample of Masthead dialog, the real stuff is on the way … our history, our editor’s bios. We’ll let you know on Facebook when it’s complete. Below is just a smattering of information…

Valerie MacEwan and her husband Robert put the Dead Mule online in 1996 as an adjunct site to a local business directory. The original Dead Mule Literary Journal, a print magazine, was born from a NC Arts Council grant received in 1996. After paying for a print edition, the magazine went online and has been online — continuously — for twenty-four years. MacEwan is an award -winning Assemblage Artist as well as a writer and she’s dedicated to keeping this Mule online for another twenty years. Originally from Fort Smith, Arkansas, she contends there is always an Arkansas connection to everyone she meets.

CL Bledsoe is the author of a dozen books, most recently the novel Man of Clay and the poetry collection Riceland. He’s been nominated for the Pushcart Prize thirteen times, Best of the Net three times, and had two stories selected as Notable Stories of the Year by Story South’s Million Writer’s Award. Bledsoe has published stories, poems, essays, plays, and reviews in hundreds of journals and websites, including The Cimarron Review, The Arkansas Review, Pank, Nimrod, New York Quarterly, Barrow Street, Gargoyle, The Hollins Critic, New World Writing (formerly Mississippi Review Online), Hobart, The Pedestal Magazine, and many others. Originally from a rice farm in eastern Arkansas, Bledsoe now lives in northern Virginia with his daughter.

*CL Bledsoe’s Memoirs will grace the hallowed halls of the Dead Mule School of Southern Literature. We look forward to featuring his writing and hope you enjoy reading it. -Valerie

Virginia Lee: The Official Voice of the Dead Mule School of Southern Literature

The youngest child of a school speech pathologist and an Episcopal priest known for his preaching skills, Virginia Lee learned early on that speaking well and effectively matters. After spending a decade working as an actor/singer in a wide variety of gigs that traversed several states, Lee realized that her true passion is Southern Literature. One night at BB King’s Blues Club on Beale Street in Memphis to see Albert Collins in one of his last performances, synchronicity occurred and two people affiliated with the University of Mississippi were seated at Lee’s table. It turned out that both were connected to the Southern Studies Department and the young woman who did clerical work there told Lee about that department and its focus. Lee was sold. After moving to Mississippi and establishing residency, Lee enrolled at the university and majored in Southern Studies. It was in Mississippi that Lee’s writing became as necessary as breathing. First published in the Dead Mule circa 2000, more of Lee’s writing appeared in the DM occasionally throughout the next twenty years. Humbled and honored to be the official Voice of the Dead Mule, Lee is thrilled to be delving into the Mule’s archives and sharing the works of her fellow Mules via the Dead Mule School of Southern Literature podcast.

Details soon to come, we’re talking more bios and such… right now, the party is just getting started.

Read more on our ABOUT page

This list will grow but we thank, forever:
Phoebe Kate Foster

and more to come… our thank you page was hacked and we have to reconstruct it.

With gratitude and affection, we give thanks to those friends who have helped and encouraged us through the years:

Helen Losse is the Mule’s amazing Poetry Editor Emeritus as you well should know. Without Helen – quite simply put – there would be no poetry section on the Mule. Her hard work and determination set the Mule apart from other literary journals as her high standards and vast knowledge assure readers the finest poetry available anywhere – online or not.

The Dead Mule is published in The South, USA.
The Mule does not discriminate but good taste and superb quality supersede all other criteria.

We also do not publish our contributor’s bios or previous publication credits. Google does a very good job of this for us.

Copyright “Creative Commons but also, we’d like to copy Half Drunk Muse’s copyright statement of long ago (because it’s a good one). Obviously we’ve inserted our name:
Submission to and acceptance by Dead Mule grants us first electronic and indefinite archive rights. All other rights revert to the author upon publication. Please credit Dead Mule as the first publisher if you reprint elsewhere; we like seeing our name in print, too. Publication in the Mule as of September 2020 also includes the rights to be included in a podcast. Writers will be notified in advance if their work is to be read on the official Dead Mule School of Southern Literature Podcast.