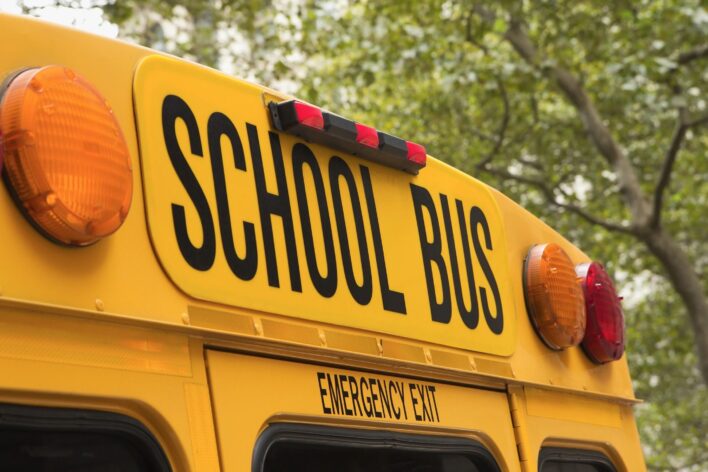 Southern Legitimacy Statement: One hundred percent Southern. Born and bred in deep southern Georgia below the gnat line, and currently living in the humid swamps of north-central Florida. If I were a death row inmate my request for a last meal would consist of fried chicken livers, harmony grits. pickled okra, and a slice of pecan pie. Of course, the meal would be washed down with an ice cold bottle of Coke-a-Cola. I went to school at the University of Georgia, the oldest public college in the nation, where after six years they gave me a degree. My education greatly exceeds my intelligence, but I have self-published a novel of historical fiction.

On the first day of school of my fourth-grade year, my public transportation to school arrived before the sun came up.  Riding a school bus was a rite of passage as a kid.  The yellow cheese wagon, the loser cruiser, the old moving stop sign, was my ride to school, and if you weren’t at the stop, you got left behind. You have to understand the dynamics of my transportation situation at that time.  My family lived out in the country, a long way from my elementary school.  If I missed the bus, my mother would be upset.  Disturbing her regular routine of drinking a pot of coffee before she started doing whatever she did at home all day was not an option.  Plus, my dad had already left for work by the time the bus arrived; the only other vehicle we had was a 1970 GMC manual transmission, three on the column, pick-up truck.  Mom could drive the old Georgia Milk Cow, but she really hated it. It’s not a great start to your day when the chauffeur is a woman in a house coat that has only consumed half a pot of caffeinated Folgers.

The school year started pretty good that first day.  My regular bus driver glided up the hill to my driveway in a brand new bright yellow Bluebird School Bus. As I stepped aboard, I immediately noticed that new school bus smell, or what I guessed a new school bus was supposed to smell like. I was impressed; as it was the first time, I’d ever been on a new school bus.  My past three years of public-school transportation had consisted of long rides on a hunk of old metal, with no air conditioning. Those old buses had smelled like dirty socks most of the time.  You should have seen the beaming, prideful smile on my drivers’ face.  He must have felt like he was driving a top of the line slick limousine.  The new bus was great; comfortable padded seats, a smooth ride, and no smoke billowing out the back exhaust like the buses of years past. All us kids were just giddy about our new ride – happy as ducks in the rain – and especially happy for the air conditioning for the afternoon ride home.

A few days later, me and a couple of buddies decided that we needed to christen the bus.  I guess we had become somehow emotionally attached to the luxury transportation and needed to do a little something to customize our new ride.  I’d acquired a cheap, pocket size, multi-tool that I had started carrying with me at the beginning of the new school year.  The tool was one of these give-away advertising trinkets that had a file, tooth pick, screw driver, and a small, dull knife that all folded neatly away into the compartment of a plastic case.  It was an early version of a nifty Leatherman device.  If I remember correctly, and I usually do, I’d gotten it from one of my dad’s customers – Wally’s Lumber City.  The handy tool made me feel tough because I was carrying a pocket knife – though it would have been difficult to cut butter with that knife.  Nowadays, I would have been expelled from school and sentenced to hard labor for bringing a knife to school, but it was a different time. Well, a child with a knife – even a very dull one – can only lead to mischief and juvenile criminal behavior.

My buddies and partners in crime decided without any aforethought that we would inscribe our names on the back of a school bus seat.  It would be our lasting mark to commemorate us as the first riders of this fine motorbus.  Our names would remain a shrine for future generations of school children to come when the bus was smelling like grimy socks. It is naturally what any nine-year-old boy would do in a similar situation on a long boring daily ride. One of my buddies went first, using my handy multi-tool instrument.  He discreetly carved “TIM” in block letters on the hard-green plastic which was the back side of the seat.  It looked okay, but was not very distinctive in my opinion.  I was next and would not be out done.  I was an artist with my not so manly pocket knife.  My name was etched with care in a huge flowing curl, two-foot-tall letters – J O E Y – yeah, that is the way you do it I thought to myself proudly. Another friend joined in the ceremonial vandalism, but just cut his initials, which was certainly not as pronounced and creative as my inscription.

I didn’t think about our handy work anymore after we had completed our tasks.  So, a few days later upon our morning arrival at school I was perplexed as to why our principal, Mr. Smith, was waiting for our bus at the designated drop-off point.  I had never seen him there in the morning before; what was he up to?   He stepped aboard before we unloaded. I was thinking maybe he just wanted to know what a new bus smelled like.  Wrongy Dongy.  Mr. Smith was tall with wide shoulders, and neatly trimmed wavy-red hair.  He was a serious type of man – most elementary school principals back in my day were – and he had an intimidating presence. A natural seriousness was amplified by his presence. I had a bad feeling that started turning my stomach when Mr. Smith called out, “Tim, A.J., and Joey, you three remain on the bus.” I caught a few concerned glances from my fellow classmates as they quickly exited the bus; perhaps relieved their names had not been called.

Mr. Smith called us over to the scene of the crime one by one.  Tim’s eyes were full of tears and A.J. was staring downcast at his shoe after their brief conversations with Mr. Smith. The imposing principal then motioned for me to join him at the back of the bus.  My chest was heaving up and down rapidly. Mr. Smith pointed at my crafty work and asked, “Did you do this, JOEY? I looked at that giant man straight in his piercing green eyes, and said exactly what I wished were the truth – “No, it wasn’t me.”  Mr. Smith didn’t break my stare, and from his expression I got the feeling that he didn’t believe the validity of my response to his question. My fourth-grade school year was taking a fast down turn.

All three of us guilty-as-sin criminals were marched promptly to Mr. Smith’s office.  He closed the door to his office with a slam.  We were busted big time.  Tim was crying profusely by now, A.J. had stared a considerable sized hole in his tennis shoe, and I was on the verge of puking.  We were all pretty sure what was coming.  This was going to be my first experience with corporal punishment.  Mr. Smith kept his handy behavioral deterrent mounted on the wall directly behind his government-issued desk. The wooden paddle had the name of the school and motto printed on it in bold letters, “Pleasant Hills Elementary – Educating the Future”. He spoke sternly while educating us about our immediate future. He told us that “defacing” the school bus was terrible behavior and punishment was required. We all should be very ashamed of ourselves, and that the new bus was paid for by our hard-working parents. I didn’t know what “defacing” meant but I got the point.  Then Mr. Smith dropped the bomb on us about our future.  He said, “Tim, A.J., you two are getting three licks and no recess for one week.  JOE-Y,” he said my name more slowly and all drawn out like, “you are getting five licks and two weeks without recess because you lied to me about what you did.” That is when my body went into self-preservation mode.  I puked on AJ’s holey tennis shoes.

My vomiting did not spare me a deserving paddling.  I was watching as my two buddies took their licks, then Mr. Smith determined I was sufficiently recovered from my weak stomach and told me firmly to, “assume the position.”  I knew what he meant because my two cohorts just took their whacking in the “position.”  The proper position involved grabbing the front of the desk, bending forward slightly, and extending your buttocks outward to await the force of the oncoming wooden plank. I assumed this technique came directly from a principal manual titled – “How to Administer a Whopping: A Punishment Guide for Correcting Deviant Behavior.” I could hear the whoosh as the thick wooden object sliced the air with impending doom. Whack, Whack, Whack, Whack, and Whack. Five consecutive forceful blows. It was a burning hurt and felt like I’d been sitting on a hot stove for the past hour.  My buttocks did not contain much padding then, and the blows were absorbed more by bone than fatty tissue.  I had trouble sitting for two days!

A few weeks later, our bus got changed out to an older, battered model.  We were back on a stale smelling cheese wagon without air-conditioning.  Our heartbroken bus driver never gave us an explanation for the unexpected change, but I suspected my classmates thought my crimes had something to do with us losing our new ride.  I did feel guilty for tarnishing the fancy new bus, and maybe this was just more punishment for my crime of defacing the bus.  I had looked the word up in the dictionary by then, so I knew what it meant.  The wise Mr. Smith was right; I should be ashamed, and I was.

What is the absolute truth I learned that day? When you are guilty and get caught, it is best to tell the truth to save your ass.