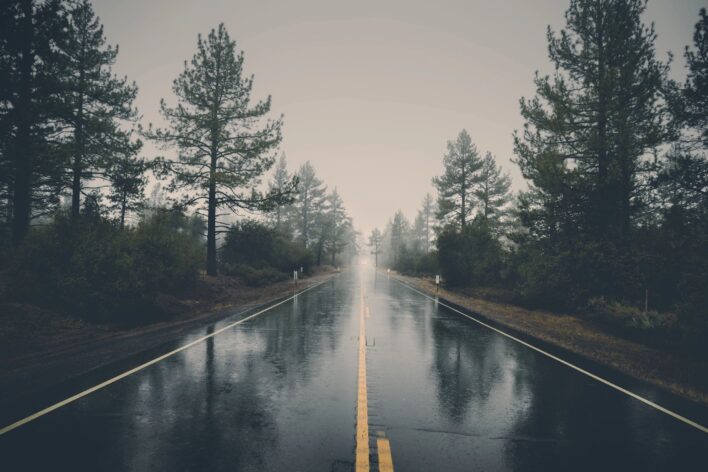 Southern Legitimacy Statement I’m in the north of Feria, a village in the foothills of the Sierra Morena. It’s the last street before the hill rises up to the castle… but, hey!!! It’s not all going north. I’m in the south of the province of Extremadura, and Extremadura is in the south of Spain. I’m not sure but if you extended the Mason-Dixon line to Iberia, Feria may be close to its average latitude! How’s that for south. Here in the south of Spain we have no Alabama Slammers, Hominy Grits, or Pecan Pie, but we do have a lot of cotton fields.

Cockerels That Turn in the Wind

I would stand at the top of Hillfield Park and idly watch the clouds drift across me, picking those I could from the sky. Sometimes far below I saw migratory swallows returning from a winter in Africa, flying past in perfect Euclidean formations. I’d look down on terraces of Edwardian houses and their roofs tumbled below me like a falling pyramid of cards—and overhead, the turrets, spires and pinnacles of the Broadway took flight over me.

Passing under a bower of London planes it entered this land of unfamiliarity. As it climbed, the overcrowded red double decker’s engine would labour—leaves and twigs scratched the side all the way to the Broadway. The automatic transmission would shift lower and lower… eventually finding bottom gear.

At each change the bus sat back, lost momentum, and then jumped ahead throwing those hanging from the straps momentarily forward.

Though unpleasant, every jolt shook troubles from passengers’ heads and took them unwittingly away from a paradigm of normality. Under the weight of their own burden, problems tumbled to the bottom of the rise and lay scattered around the Victoria Stakes.

Unfettered, commuters were carefree, gay, at liberty to fully enjoy the suburban hilltop idyll—but it was a presumption to believe these shifts of actuality continued off the hill.

When a problem was accepted the last two columns agreeably tallied. If not, it’s annulment was postponed and Claimer left disquietingly empty. Occasionally, it was necessary to offload the problem onto someone else. Whilst the unfortunate could decline this disagreeable chore, the collective spirit of the community encouraged them to accept it. Left unclaimed, the problem became an ongoing dilemma that bred communal discontent.

Commuters would queue half the length of the Broadway to board the 144. There were those in line who selfishly anticipated a scribe’s error. It allowed them to forget their troubles and mitigate the consequences. For all that, errors at the Victoria Stakes were infrequent, the owners nearly always repatriated with their problems.

The scribe then drew a line of finality through the entry.

Passengers were so accustomed and comfortable with these shifts they passed involuntarily.

They were free to plug-in to smartphones, read give-aways, or lose themselves in self- preoccupations. They stood swaying like closely planted larch trees in a stiff breeze as the transmission shifted lower and the bus lurched to or from the unfamiliar.

And if anyone remained unconvinced that normality had been left behind at the Victoria Stakes, the depot of the 144 was proof to the contrary. With handbrake on, the motor off, drivers jumped from their brilliant-scarlet cabs into the garden of an elemental’s dwelling. It was an enchanting pavilion at the centre of the Broadway, surrounded by hips and haws, privet, a brass water fountain, and cast iron railings with deco scrolls. Here, the elemental oversaw the scribe’s work and scattered enchantment across the heights. Problems became half forgotten memories that one might believe had been lost forever.

Many decades ago, fueled by fever or senility, elders were deluded about the reasons for these involuntary shifts. Some believed—thousands of years ago—a tribe had travelled to a nearby hill to rid themselves of conflictive neighbours; to live isolated in a manner characterised by civility. Or—many centuries ago—Muswell Hill cut itself off from London and reinvented everything, by both inspiration and mining memories of elderly in Cranwood. Otherwise at the peak of its popularity—just a century ago—the neighbourhood had found a temporal paradox and had no intention of breaking this time loop.

They’d been content to live in the dwellings of the era. Long smooth red brick Edwardian terraces that ran for more than a mile, from Fortis Green to Colney Hatch. The terraces drawn-over with zinc oxide quoins, consoles, copings, brackets, and finials. They playfully danced along the Broadway’s terraces, around doors, windows, and balconies, over the top of parapets, and between the blocks of flats—cascades of fuchsia, petunia, and pink geraniums falling from balconies around them.

There were fanciful belvederes and turrets, with fish tails masquerading as spires, steeples, or the roofs of chateaux—their scales disguised as slates. They’d stick-up like sardines in an upside down stargazy pie, and were topped-off by cockerels that turned in the wind. Beside them, tall chimney stacks thrust themselves through the roofs and were crowned with dozens of golden orange clay pots, the height of a chimney sweep’s climbing boy.

Over entrances, heavy pediments were taken on squat tubby columns, bulging under the weight they carried. They sat on austere funereal polished black granite blocks, with flakes of pearlescent mica. Beyond, were stairwells, caged lifts and scissor gates, stained glass, and oak doors with brass handles polished by the palm of the hand. Behind these doors: spinsters with Pekingese and aspidistras, who took tea at four, and crocheted—otherwise—eccentrics with smoking pipes, pince-nez, and cut crystal decanters of claret, who recited Byron’s soliloquies.

Despite being far from wealthy, they’d been well-off. Their overriding politics one of social responsibility, which over the subsequent decades hadn’t changed. It thrived from beliefs that seemingly came from nowhere, existed like a natural leaven fed by the rarefied air, growing without the necessity or the paraphernalia of a religion.

They’d been absent for decades when I lived there; but occasionally a spectral apparition might have been seen behind a terrace’s dormer. If so its sustenance was nothing more than recollections of halcyon years.

What couldn’t be disputed was an endless supply of expensive impeccably tailored labels, browned paperbacks by Ian McEwan and Martin Amis—or the Life of Pi—and mismatched Midwinter crockery that found its way into the Broadway’s secondhand shops. There were multi-coloured recycling bins overflowing with conscientiousness, and Sainsburys’ food bank was as high as the fullest larder in the neighbourhood: filled with Maharashtrian moong dal tadka, vegetable gyoza yakisoba, sushi, and a beef casserole with dumplings.

In truth, I couldn’t argue that everything here wasn’t a little different.

Though weathervanes with cockerels were popular, the tropospheric belvedere and cupola at eighty-eight had no need for one. There was very little blue sky above it. The highest cloud was far below, and it existed above any meteorological phenomena. Its finely turned wooden arcade looked down over, not just murmurations of swallows, but the entire collection of humanity and its myriad creatures.

He was perfectly enlightened to the idea that the lowland’s continual change was the ruination of his meditative ruminations.

Furthermore—no place that had conjured its own ethics, concealed anchorites, or looked down over the clouds, could lack a sumptuous palace.

Not a royal palace.

It was a playground of entertainment and recreation for the commoner. If the hermit had tired of his solitary existence and surrendered to temptation, he would have found in Alexandra Palace, all the pleasure, diversion, and hedonism he’d previously rejected. Curiously the palace—though far from old—had burned itself to the ground with remarkable efficiency.

Not once, but twice!

The first occasion was just sixteen days after it opened. In deference to the hermit it acted with an impatience that suggested impetuosity—an imperative to lessen the hedonism that itself had propagated. Even vast water tanks over its remodelled corner towers failed to prevent a second calamity more than a century later. But one might easily conclude that within the boundaries of the temporal paradox it was impossible to ever destroy itself.

The neighbourhood was clearly conducive for the hermit, but the palace’s permanence ensured the heretic wasn’t excluded. Being aware of its social responsibility it favoured neither; accepted them both.

But had the hermit unexpectedly ventured down just six flights to the Broadway, he would have found an anachronism caught in the very same paradox. It completely lacked the ability to change itself. Its fat rascals displayed between the barleycorn uprights of W Martyn’s archaic shelving, as they always had: side by side traditional tea loaves, tea cakes, tea from every plantation of the British Empire, and coffee.

Partial to early morning coffee, the hermit might have done worse than follow his neighbours. They were driven somnambulistically—if not otherwise—to satisfy their dependency. Led by reins tied to a bull ring in their septum they were pulled by the aroma of freshly roasted beans. The incongruity equal to a stockman’s youngest daughter leading her father’s half ton bull to market. True to say, it was difficult to avoid the temptation. The smell from the roaster in W Martyn’s window filled every street of the neighbourhood, and overflowed like floodwater down the hill.

On weekend mornings, those still lost in a hypnopompic trance twisted and turned with the aroma of coffee in their nostrils and hallucinations of Martyn’s employees walking the streets… or rather—peasants in a Provencalfield scattering not seed but roasted coffee. They wore bonnets rouges and clogs, and threw the aromatic beans from pouches slung over their shoulders. Few believed these fantasies—if they did, they regarded it as profligate and counterproductive. Strangely off the Hill such unconventional advertising was seen as enlightened.

It was a curious but rare inversion.

The geophysical engineers of the Hill had likewise dismissed talk of Provencal sowers—convinced by the aroma’s pervasiveness that its diffusion was mechanically enhanced. They’d concluded that the boulder clay of the hill’s glacial plateau would have been straightforward to tunnel; and imagined a sophisticated system of ducting beneath the hill.

To many it seemed even less plausible.

There was even speculation that W Martyn possessed a grand ventilator, each blade taller than a coffee tree, propelling the aroma further than it might naturally have gone. Yet no-one could ever say where this ducting system, and its huge fan, might be.

In truth, W Martyn had no unconventional advertising or complex technology, simply a yellowed-plastic Xpelair in a grimy fanlight above the roasting machine. The roaster’s perforated drum and fire box—buckled by nearly a century of use—resembled a milk churn screwed to a tea chest. It had cast iron brackets with curlicues, cogged wheels, a drive belt, and battered tray; where roasted beans were shovelled into brown paper bags.

It wasn’t much to look at. It was easily overlooked.

A shabby insignificant machine lost in the shadowy depths of W Martyn’s shop window. But only those who’d lost their sense of smell refused to testify that the machine was a definer of the neighbourhood. A caffeine seductor that had an influence disproportionate to its size and appearance.

Fortunately, for hyposmics and anosmics unmoved by its olfactory seductiveness, there were many other peccadilloes, peculiarities, and idiosyncrasies on the Hill to occupy them.