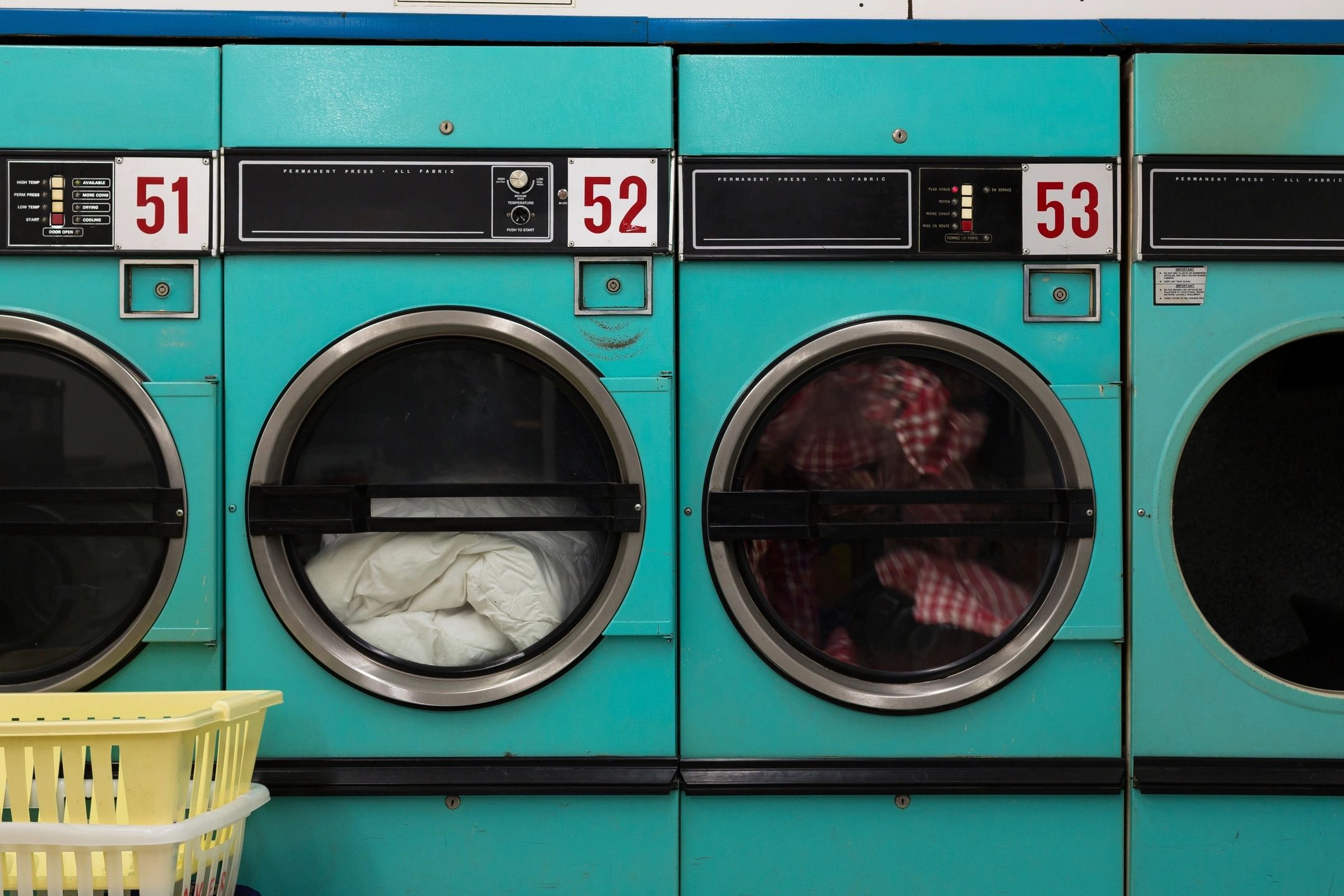 Southern Legitimacy Statement: I live south of Lake Erie now, the shallowest of the Great lakes and the one with the most shipwrecks, but my mother’s family started in Virginia, some as indentured servants, working their way through Tennessee and Kentucky in five generations, before finally ending their journey as farmers in Indiana. The songs and stories of Appalachia linger on in the oldest relatives’ stories. I lived in Sarasota in my young adulthood, trying to find myself, an ongoing project, and memories of youth for me are hot Florida nights and rattling palm branches.

Crime and Punishment at the Laundromat

The first rule of the laundromat is to never, ever, leave your clothes unattended. In my defense, there was a cute guy with blonde surfer-dude looks selling watermelons and muskmelons out of the back of a station wagon in the parking lot of the Palmetto Laundromat and it was hot as blazes inside with all the dryers going. I was only gone a few minutes, but it didn’t change the fact that my clothes had vanished when I returned. A load of laundry that represented most of the moveable goods to my name, including uniforms for my two summer jobs: the low-cut sailor wench dress for the fried seafood place and the khaki overalls for the car wash. I was literally down to the clothes I was wearing on my back.

I was eighteen in the summer of ‘79, living on my own for the first time, saving every penny, so I could be the first one in my family to go to college. I was scared all the time, but I put on a tough front for my parents, who were sure I’d be murdered in my bed living alone. I lived in a cinderblock hotbox plopped in the middle of saw grass and palmettos that was dirt-cheap because no one else was foolish enough to rent it in the summer. I shared it with cockroaches, mosquitoes, lizards of all types and snakes.

To tell the truth, I liked the reptile version of snakes more than the human version. Like the peeping Tom who hid under my window one night. I only knew he was there when he let out a yowl and screamed, snake, snake, dancing around in the moonlight. He ran off and as far as I could tell, never returned but, just in case, I started sleeping with a kitchen knife under my pillow. It gave me a friendly feeling toward the snake, a large milk snake I’d seen around, whom I named Harvey.

Neither the older ladies folding their cotton shirts or the younger women corralling rowdy kids cared about my plight as I dashed frantically around the laundromat looking for my missing clothes. I stuck my nose in their baskets and almost got into a fight for my pushiness. You’re not supposed to leave your clothes unattended, a woman in curlers told me, righteously.

Nobody had seen a thing, a story they stuck to even when I called the police, and the Sarasota Police Department sent their youngest, least experienced cop to investigate. He looked undernourished and nervous, and I didn’t see how he was going to help, but I was out of options and ready to cry.  It occurred to me that maybe if I’d been a little friendlier, someone might have watched my clothes for me. At eighteen, I thought I could do it all alone.

The young policeman was gung-ho and eager to crack the case. He questioned the manager, a sad-eyed bald man who seemed to wear the same Tampa Tarpons T-shirt every day, until the guy admitted that, yes, maybe he’d seen a guy with a purple laundry basket and it had seemed strange, but it wasn’t his business to babysit people’s clothes who left them unattended, and yes, he kind of knew the guy, because he was always looking for odd jobs and he said he was staying with his Grandma at the Sunset Trailer Park down the road. The manager said he’d seen him driving an old red Ford pickup with a busted tailgate. As they talked, I could see the wheels going round in the manager’s head, constantly recalculating the relative trouble of answering or not answering these annoying questions. The policeman, whose name was Jules, wore him down, like sandpaper on wood, promising to keep all his information confidential.

Jules made up in confidence for what he lacked in appearance. People always underestimate me, he said, a little smugly, and they tell me things before they know it. I thought how people usually underestimated me and it typically made them treat me like I was invisible.

The trailer park was two miles away and he had me jump in the backseat. We found the truck parked next to a well-kept trailer with potted bougainvillea and a yellow-striped awning. Jules’ knock was answered by an older woman in a flowered housedress, who introduced herself as Lois Perkins. She looked like my grandmother with her tight blued perm and her twinkly eyes. Her trailer was at once the cleanest and the most cluttered place I’d ever seen, with all the photographs and bric-a-brac competing for space on walls and tabletops. It was like a shipwreck where all the detritus of a life lived elsewhere had washed up. I couldn’t see the couch for all the needlepointed cushions. One said, “Home is Where the Heart Is” inside a lavender heart.

Mike was her grandson, she said. He was down from Chicago and just staying with her while looking for work.  She kept repeating Chicago, like his being from Chicago explained everything. I was starting to feel bad for bringing this trouble to her; this sweet old lady, completely flummoxed by law enforcement showing up at her door.

I’ve never been in any trouble, she said. What will the neighbors think? I just don’t understand why that boy would take this nice girl’s laundry. She offered us sweet tea and strawberry cake, like we were neighbors dropping in.

Jules was stern and professional with Lois, despite the sweat running into his tight uniform collar due to the close, hot air of the trailer. The smell of Lemon Pledge was overwhelming. Jules seemed to be enlarging, swelling to fill the cramped living room, hands hooked in his belt, as he relaxed into his role as the authority figure with the victim and a material witness. He wasn’t going to be taken in by any strawberry cake. He wanted to know Mike’s whereabouts.

Lois looked around, as if Mike might be hiding under one of her needlepoint cushions or her overstuffed couch. He was here a minute ago, she said. He comes and goes so quick I can’t keep track of him.

Mind if I have a look in his room? Jules was not giving up. I hoped Mike wasn’t hiding in the bedroom, ready to spring out at us. I don’t know if I was more afraid for us or for him, since I couldn’t help but be aware that Jules had a gun holstered at his side.

I wanted to tell Lois that she didn’t have to let Jules search her place, but I kept quiet. Whose side was I on? As Lois fluttered ahead of Jules, already apologizing for how her grandson kept his room, we heard the truck snorting alive outside. Jules pushed past me and was out of the door like a shot. Too late, the truck was burning rubber down the gravel road between the trailers.

Well, there he is, Lois declared. Jules was hot to give chase, but I begged him not to. I was starting to feel that this was all getting out of hand and I didn’t want to be the cause of a car chase.

Don’t you want your clothes back? Jules glared at me, like I was the enemy here. I couldn’t tell if he was angrier at me or himself for letting the suspect get away. I found myself consoling him and he shrank into a kid again, just a bit older than me, trying to imagine himself into adulthood.

We all stood in the road, watching the truck screech onto Highway 301, feeling our own individual senses of failure and loss.

Three days later, Jules showed up at my door with my clothes and a look of sly triumph on his face. My shorts, tees and uniforms were folded neatly in my battered plastic basket, freshly laundered and dried, fragrant with the scent of Downy detergent, the one my mother always used.

I wanted to return these, personally, he said, handing over the loot, preening a little. I told you I don’t give up. I was so grateful to see my clothes again, I felt he was entitled to a victory lap. I’d had to borrow uniforms from my coworkers and wash out my underwear every night.

Lois said Mike handed them over to her when she told him she was going to call his dad in Chicago, Jules said. She tried to make them as nice for you as she could, since they were a little moldy by the time she got them. According to his grandmother, Mike’s on his way to Key West, has a line on a kitchen job. I told her I didn’t want to see him back here in Sarasota.

Jules glared sternly into the little bit of the horizon you could see between the trunks of the palmettos, like he was personally standing guard against Mike’s return. We were out in front of my bunker, the steam from the recent rain rising around us, mosquitoes forming little clouds and the sun a dull glare above.

I was thinking that it sounded like I had Lois to thank for getting my clothes back, but I kept these thoughts to myself.

He lingered, swatting the bugs, while I stood in the doorway with the basket against my hip, and I think we both felt awkward, like we had been through something together, but we weren’t sure what or how to put it into words. For a moment, I thought he was going to ask me out, and that I would have to come up with some lame excuse; but if he was, he thought better of it.

He finally said, opening his car door, got to get back to it. Back to more stupid kids doing stupid things. He gave me a thumbs-up.

I returned it, one grown-up to another, and watched him ride off into the sunset through the palmetto trees. Night would come and Harvey would be out hunting soon.