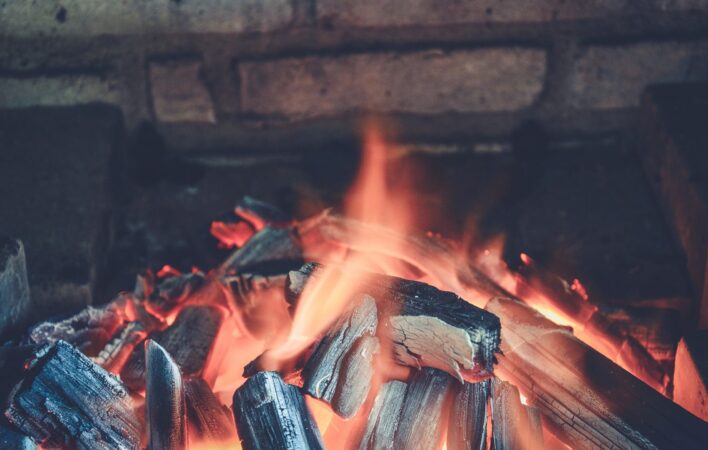 Southern Legitimacy Statement: Texas is considered “the south,” right? I sure hope so… I wrote this little story on the back of high school football, the King in Texas. A football game in a small town can bring even the most divided of communities together. Some of my favorite memories from high school are with my teammates. I miss the game, but it’s the friendship and comradery I miss the most. If you’ve ever experienced anything like this, you know what I mean.

We parked my truck next to the rest of them and stepped out, landing in shin-high coastal grass that should’ve been shredded and baled a long time ago. The glow from the bonfire illuminated my team’s faces’ as they watched Cheyenne and I hop down.

“Bout time, Hudson!” That was Edwardo Martinez – E-Mart we called the stout Latino. He was an offensive guard. Even at 5’6” he was as strong as a Charolais bull and quick as a jack rabbit.

I couldn’t help but grin. “Sorry, boys; Chey left her fake at home, so we had to go get it,” I said as I lifted the case of cheap beer from under my jacket in the backseat. The rest of the boys laughed as they held their own contraband. Most of them drank beer, the cheap kind like I did. But, our fullback, Danny Wilson, drank from an old tin flask he said was his dad’s before he passed a few years ago. He slouched in his lawn chair, and stared into the flame that ate away at the old oak tree. His nickname was D-Dub. Come to think of it, everyone had a nickname back then.

Cheyanne and I sat down in our chairs and moved them close together so we could keep each other warm. The fire was big, but those early-November northers that come in off the Texas hill country, never fail to chill you to the bone. We all huddled up in hoodies or jackets or some sort.

“We were talkin’ about life after high school,” Eric Bates, one of my wide receivers said.

I gave a half-smile. So what I was going to play college ball? That didn’t make it any less intimidating. I tried to blow it off. “Hey, at least y’all won’t have to bust y’alls’ butt every day; have some coach screaming at you, ‘Move faster, Hudson!’” They all laughed, even Danny. I always liked that kid… Felt sorry for him though; he had it rough at home.

“You decided on a branch yet, D-Dub?” I asked him.

E-Mart responded before Danny could look up from the fire. “He better go be a friggin Navy Seal after that punishment he gave out tonight! How many pancakes you have, D-Dub? Three, right?”

Danny just shrugged his shoulder and took another sip from his flask. “I dunno.” There was a moment of silence as everyone took a drink from their cans. “I’ll probably go into the Corps, though, yeah. Don’t know what else I’d do.”

E-Mart smiled and nodded his head before doing his best “military-dude” voice. “Well, Semer-Fi, brother.” Danny kind of grinned and gave a soft chuckle. I could always tell Eddy got on his nerves a little bit. That was his role though: the jokester. The tank of an eighteen-year-old never failed to lighten the mood, even if it was the wrong timing.

“What about you, Eric?” I asked my wide-receiver.

“Just go to school, probably in Dallas. Maybe join a frat or something. They say Southern Methodist has a pretty good law school.” Eric was always had a plan of some sort.

“C’mon, no football? You could easily go play D-3, some D-2 teams also.” I meant it. Eric was pretty good. Maybe not super fast or a freak athlete, but definitely good.

He shrugged it off. “Nah, I’m done after this year. Time to think about bigger things.”

“Must be nice to have options, amigo.” It was E-Mart, wearing a half-smile-half-grimace of complacency. “It’ll be the tractor for me. This vato was born here, and I’ll probably die here. Same as my abuelo. Might as well call me a ‘Hometown Lifer,’ boys.” There was a long silence as we all took a drink and looked at the fire, throwing shadows that danced across our faces to the rhythm of the wind. I didn’t recognize it first, but as I let Eddy’s words linger in my brain, I picked up on the sense of pride that accompanied his tone of complacency. He was right – his family had been here for many generations. There weren’t many Mexican folks in town that E-Mart didn’t see at the annual family reunion. This little central-Texas town was in his blood and it was all he knew. As much as it felt like my blood, like it was a part of me, I knew, for some reason, that that wasn’t the case. Sure, I loved home and felt comfortable here. I could name any street in any part of town, plus most of the buildings on each one. There wasn’t a backroad Cheyenne and I hadn’t snuck off to. If I had to, I think I could drive blindfolded and make it anywhere in the county without too big of scratch on my truck. No doubt, this was home, and it would always have some real estate in my heart. Still, though, Eddy felt it even more than me. Without his family, home might not have looked the same as it did now.

I looked over at Cheyenne and made sure she was plenty warm before getting another can of beer from the cooler next to my chair. E-Mart and Eric began small talk amongst themselves as Cheyenne looked over at Danny. “You want a beer, D-Dub?”

He looked up from the burning post-oak wood. “No, I got Mr. Beam, here,” he said, tapping his jacket pocket where the flask was hidden.

I grinned and shut the cooler. I placed my hand in Cheyenne’s, and she squeezed. She hadn’t decided on her post-high school plans just yet. That scared me. But we vowed to make it work, no matter the distance between the two of us.

“What about you, Cheyenne? What are your plans?” It was Danny that clearly caught Chey off guard with the question.

“I’m not for sure,” she answered casually. “I’ll probably go wherever Tommy ends up playing.” She squeezed my hand even tighter and I could feel my heart swell and emotions flutter like I was a little kid again.

Danny just nodded and softly smiled. “Cool,” he said before returning his attention to the fire.

I thought it was pretty cool, the group of us. Here we were, hanging out around the fire after a great football game, drinking and just hanging out. This, I told myself, was what high-school was all about. Sure, we had heard it all before. “Cherish these moment’s; you’ll miss them more than anything,” and “You’ll blink, and poof, it’ll all be gone, somewhere in the past.” As much as I didn’t want to believe those gloomy forecasts, something within me told me I should. Sure, we only had a semester-and-a-half left of school, but, in my mind, it seemed like a long time. Football wasn’t over, there was winter and spring break, baseball, basketball, track. I shook those old wives’ tales from my mind with a swig of beer. Nah, I told myself, we won’t be like that. We’re too close for all that.

Then, E-Mart stood and, smiling, raised his can in the air as if he were about to make a toast. “Boys, and Cheyenne of course, they say that these days will be coming to an end soon. They say ‘it’ll be gone before you know it.’ That these nights down in the pasture, sitting around a fire, will soon be nothing but a memory.” He paused and looked at all of us individually before speaking again. “What they don’t know, is that we’re us. And while we may be moving away from the little ol’ town of Lockhart, Texas, there ain’t nothing they can do that’ll take these times away from us.”

“To us,” the rest of them said. We all drank an extra count that time.

We all smiled and looked around at one another in the firelight that was beginning to dwindle. Eric noticed and tossed a few more logs on, sending sparks into the sky. I watched them float upwards, then get snatched away by the wind and swallowed by the dark. Cheyenne nuzzled up next to me the best she could from her chair. I put my arm around her and looked up once more. The moon was barely visible that night, with clouds obscuring its faint glow. The words of those older than us came into my head again, but there was no taking hold this time. No, I reassured my conscious, we won’t be like them… not us.