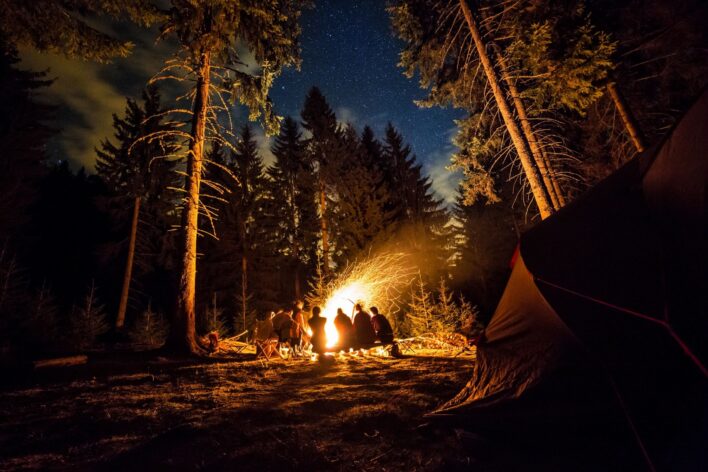 Southern Legitimacy Statement: When I was a kid, I told my dad, sitting it the passenger side of his rusted Ford truck, “I ain’t a Southerner.” My dad, who lived his whole life in Appalachia said, “You don’t really have a choice in that.” It took me a while to find my love of the South, to appreciate that I grew up in Tennessee and North Carolina, where the mountain music my parents played and the hum of the Clinch River eventually drowned out the media’s lies that Southerners are nothing but hicks and rednecks. These days, I’m glad my dad was right: I didn’t really have a choice.

My mother was robbed when she lived in a canvas tent on the Montreat Campground. You’ll know Montreat when you see it. It’s all hills and trees, wet leaves that slop across your windshield while you drive, Lake Susan (which is really a pond) with her paddle boats, old men chiseled out of apple cores swapping bails of blueberries in parking lots like drugs. And the ground glitters. My mother always said that was from the mica. Knowing Montreat, fairies might be more likely.

She was working at the college that summer, living at our family home Knockmoran, named after the hills of our Scottish heritage. We stayed there for a couple of weeks most summers of my childhood, depending on which relative inherited it after the previous one died. That summer it was my mother’s Aunt Lois, who let her stay in the small room at the end of the hall overlooking the front lawn, which, in my memory, was always choked in sweating ferns.

The next part is a mystery. Drinking lemon tea on the back porch, my mother can’t explain why she left Knockmoran and moved to the Montreat Campground.  “To get away from people, I guess,” she’ll say.

I think I can fill in the gaps. I see her watching the dripping ferns from her window, smelling the Montreat smell (which, if you’re curious, smells like smooth stones just after you dig them out of a fresh, muddy creek bed), seeing fairy lights blinking in the trees, above the ground that glitters, feeling a lurch in her stomach, grabbing her tent, and scrambling out the front door without a goodbye or a look back.

She set up her summer home in site fourteen beside Flat Creek. She piled her pantry in one corner, soup cans, instant oats, tea bags, granola, peanut butter. She stacked her dresser in the other, T-shirts, flannels, jean shorts, bandanas, and one flowery summer dress her mother told her to pack “just in case.”

The campground was dark at night, the stars clotted with rain clouds and trees. Flat Creek hissed and frothed. Sometimes drunk college kids kept her and the camping families up late into the night. A traveling band of mice moved into her pantry for a while.

But I picture my mother stretching in the morning. She’s wearing a tank top and no bra, her frizzy black hair splaying across her shoulders, longer and wilder than it’s ever been since she moved out of the photo album and became my mother. She waves to the families and sticks her tongue out at the college kids. She’s older and wiser than them now, and she’s one with nature.

Halfway through the summer, she came back to the campground and found her tent flap gaping open. The peanut butter, granola, sleeping bag, and flowery summer dress were gone. She walked the mile and a half to the sheriff’s station.

When she explained what happened, the sheriff, who had known my mother since she was six, moved his chewed toothpick from one side of his mouth to the other and said, “Let’s roll.”

My mother doesn’t know how he found the culprits. I like to think he went down to the Lake Susan paddle boats and knocked some skulls. That he burst into the Huckleberry Ice Cream Shop and pinned the usual suspects to the walls shouting, “Where’s the dress, chump?” with his toothpick waggling in his mouth.

His methods worked, whatever they were, and he turned up two pimpled high school boys with sheepish eyes. They couldn’t return the peanut butter and granola, but they handed over the dress and sleeping bag.

They were sentenced to taking the flowery summer dress to the cleaners, and the rest of my mother’s clothes for good measure.

Some days I try very hard to be like my mother. I stand in the wooded dark as long as I can, blinking into the starless unknown full of robbers and mice, and search for fairy lights, waiting for the lurch in my stomach that will pull me into the forest’s wet embrace, listening for the whisper my mother heard sitting in her windowsill at Knockmoran, looking out over the dripping ferns, Come into the woods and don’t look back.

And when I get too scared, I try to be like a small town sheriff. I chew on a phantom toothpick, squint my eyes, and say, “Let’s roll.”