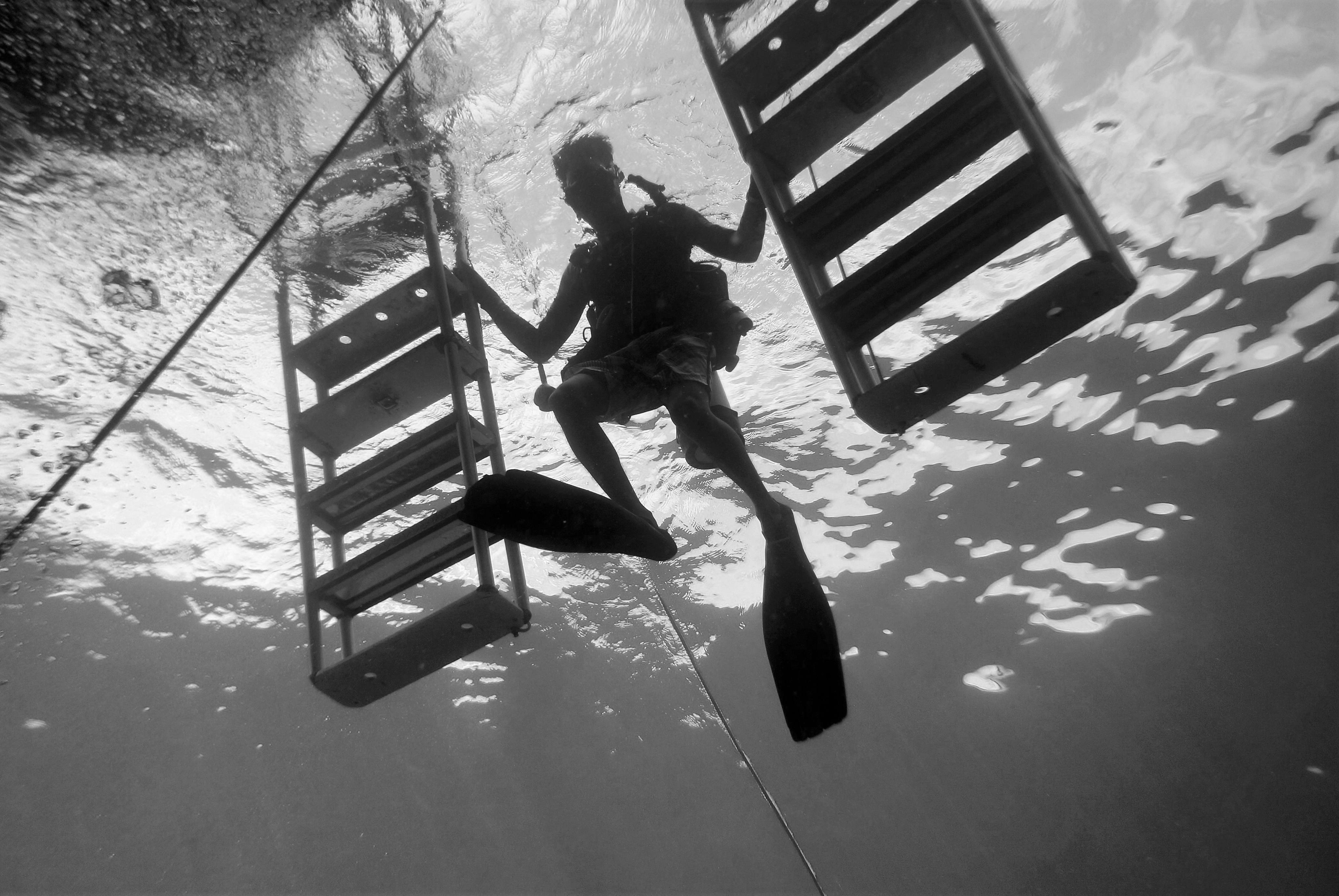 Southern Legitimacy Statement: I said comic books when I moved to Tensas Parish, Louisiana as a small kid. I said funny books when I left. I moved there during WWII from Manhattan. I remember and love St. Joe, LA. I don’t remember Manhattan. I have a sculpture show coming up in KC May 2019. The title is “A Love Letter to Tensas Parish.” Y’all are invited, hear? Mudbug Beer will be imported from Louisiana. www.wisesculpture.com

He just did it once, yet they remember and talk about it well after the event if it can even be called an event. Young, maybe nineteen. Twenty. Ducktails, slicked back. Flat top haircut. Good arms. Working man’s arms, cigarette pack rolled up in one t-shirt shoulder sleeve. Luckies. The red circle showed through the white cloth.

He stepped down into the pool hall, out of the bright Little Rock sun. Three steps, then the door. Opened the door. This door was old, and heavy. It featured a window pane with chickenwire either embedded in the glass or sandwiched between two thick panes of yellowing old glass. On the outer pane was painted in a semicircle, Ray’s Pool & Billiards. When he had stepped through the door, and cleared it, he let it shut, aided by a pneumatic door closer. He slipped off his sunglasses and hooked the wire earpiece in his t-shirt neck. Then he slid his hands into his back Levis pockets, hollered, “Hey!”

The clicking at the lined-up tables stopped. Players straightened up and watched him. The only movement in the room came from the slowly revolving fans high above the tables. The room was skinny and long. Table after table receded toward the back. Ten, maybe twelve tables. Room to move around them, that was it. On the walls behind the glass counter were black and white pictures of shooters from the past. Benny Cucinelli. Minnesota Fats. Kansas City Slim.

The new arrival walked to an empty table, pulled a stick from the rack of cues, rolled it on the table for true. He removed the triangular wooden rack from the balls on the baize. He lined up a cue ball and smacked the balls. It could have been a pistol shot, but they all stayed on the table. Then he moved around the rails like a dancer calling each shot, barely taking time to stop and shoot, cleared the table.

He took a fat roll of bills from his tight jeans pocket, held it in the air, cocked his head in a question. No sounds. Nothing. He smiled, walked back to the door. Ray stopped him, said, “Two fifty for the table, minimum.”

The young guy laid three bills on the counter and walked out into the hot downtown Kansas City street and got hit by a bread truck. Before the cops came, Ray checked the young guy’s pulse, removed the roll of bills. No one said a word. The few who had come outside returned to the tables. Clicking resumed. Ray licked his thumb, counted the bills loosely. Then he separated the fives from the ones and the one twenty on the outside, laid them in the cash register, said “Chickens one day, feathers the next.”

He turned on the radio behind the counter. Dean Martin sang “That’s Amore.”

In the shade of the boathouse on the dock, I was taken by the similarity of her sleeked-back sun-streaked hair to the shining mahoganies and teaks of the classic speedboat. The colors were so like the well-kept lacquered Chris Craft. I held her hand as she climbed down into the boat, then handed her the raffia weave bag and a large hat.

She spread a beach towel on the seat and sat down, carefully
.
“So we don’t burn our lovely asses, sweetie.” She smiled up at me. “Not right away, anyway.”

She wore a pale blue one-piece suit, daringly cut high on the thighs, the deep vee front very revealing of her breasts. Attractive older women were not yet referred to as MILFs back then. Claire would have been the exemplar of MILFs. Her large polarized sunglasses reflected two of me standing on the dock.

The Chris Craft rocked slightly in the wake of a passing speedboat far out on the lake. I untied from the cleats and stepped down into the cockpit. She played with the locks on the back of my neck as I turned the ignition on and the powerful twin Chryslers caught immediately. I’d waterskiid behind this boat, though I could hardly swim. Claire had me wear a life jacket and when I’d skiid enough I signalled and she swung me toward shore so I could ski right up on the sand.

I marvelled at the shape this craft was in, compared it again, metaphorically, with Claire, her streaked hair, her figure. I was more used to an aluminum Lone Star with a small outboard clamped to the transom. And the girls of St. Joseph, Louisiana. Claire liked my accent. Remarked on it constantly. Hers was Chicago, sort of flat, but coming from her it was elegant. Her husband was connected. I was young and stupid. A bad combination for an affair.

We pulled into the cove, the Chryslers murmuring. I coasted to a sand bar and cut the ignition. A black Cadillac merged with the foliage by the private road.
“I’m really sorry sweetie,” she said. I couldn’t see her eyes behind the sunglasses, but I saw her swallow after she said it, and her mouth slacked open a little. She was sorry.
Two men in suits walked out to the boat, steadied it while she got out. She took her bag and hat to the car. I never saw her again.

“Fucking sand,” the larger of the two men said and brushed at his expensive shoe. Then to me, “Move over.” I was between the two when the big guy started the boat. I smelled their cigar smoke and shaving lotion. He backed off the sand bar, headed toward open water. The Cadillac had disappeared.

Out on the sparkling chop, he slowed. The other man said, “Out.”

“Maybe you’ll learn,” he said. and helped me overboard.

Orlando Spade was ripped and had arms like fireplugs. But he was only about five foot five. A very compact and vicious five foot five. He wore a Tom Mix cowboy hat, the crown of which was undented straight from the block, and that added half a foot to his height. His boots had lifts good for another couple inches. He was unsociable about his height.

He carried his bullriding equipment in an attache case, a good one. He’d hunker in the dust behind the chutes and open that case up, the two locks would go pop! pop! and there were his bull rope, glove, cowbell, spurs, chaps, duct tape, a pint of expensive bourbon, pain pills, a rosin sock, other stuff. Often a S&W .38, and some wanted fliers
.
He was always on the lookout in those rodeo towns for a bad guy or two with big money on his head. Orlando had snagged Rockin’ John Denton at a jackpot rodeo in Memphs. It was a twofer. Spade had ridden Mighty Mouse III to the buzzer, and nobody had ever done that. After he collected his purse, he went up to the announcer’s booth where Denton was having a beer and a blunt with the announcer and watching for women from the high vantage point. He swung his attache case into Denton’s head resulting in immediate cold-cockment.

Then he hauled Denton to the county sheriff, Rockin’ John’s hands and ankles tied with plastic zip ties, from the attache case. Tightly tied. John sued him from the slammer for excessive force and cruelty.

When a man served Orlando with the papers he rolled them up and used them as a weapon, jamming them into the server’s adams apple. He told the gasping server that he knew where his girl friend lived, and what the server’s dog’s name was. The server hoarsely told the deputy he never found Spade. Rockin’ John dropped charges and settled into making license plates or whatever three-time losers do in Riverbend Maximun Security Institute
.
Orlando’s reputation preceded him by quite a few miles at times. His appearance in a town could clear the front porches of rooming houses and make pool halls quiet and mannerly. Smart folks minded their own business in bars he would enter. Less smart ones would bray something like, “Well if it ain’t two-gun shortie. Take thet lid off, see if yer tall enough for this ride.” And they might elbow a companion and get one “haw” out before they hit the floor head first. Orlando brooked no shit, especially about his height or his getup. He was not, however, intractable.

When he found me, I knew who he was.
“You needn’t get rough, Mr.Spade,” I said. I’m a wrongdoer for sure, and ready to pay penance.”
“Finish your drink, Mr. Archer” he said, and hoisted himself onto the next stool. “White collar ain’t crime in my book, and I need a good I.T. guy.”
(end)