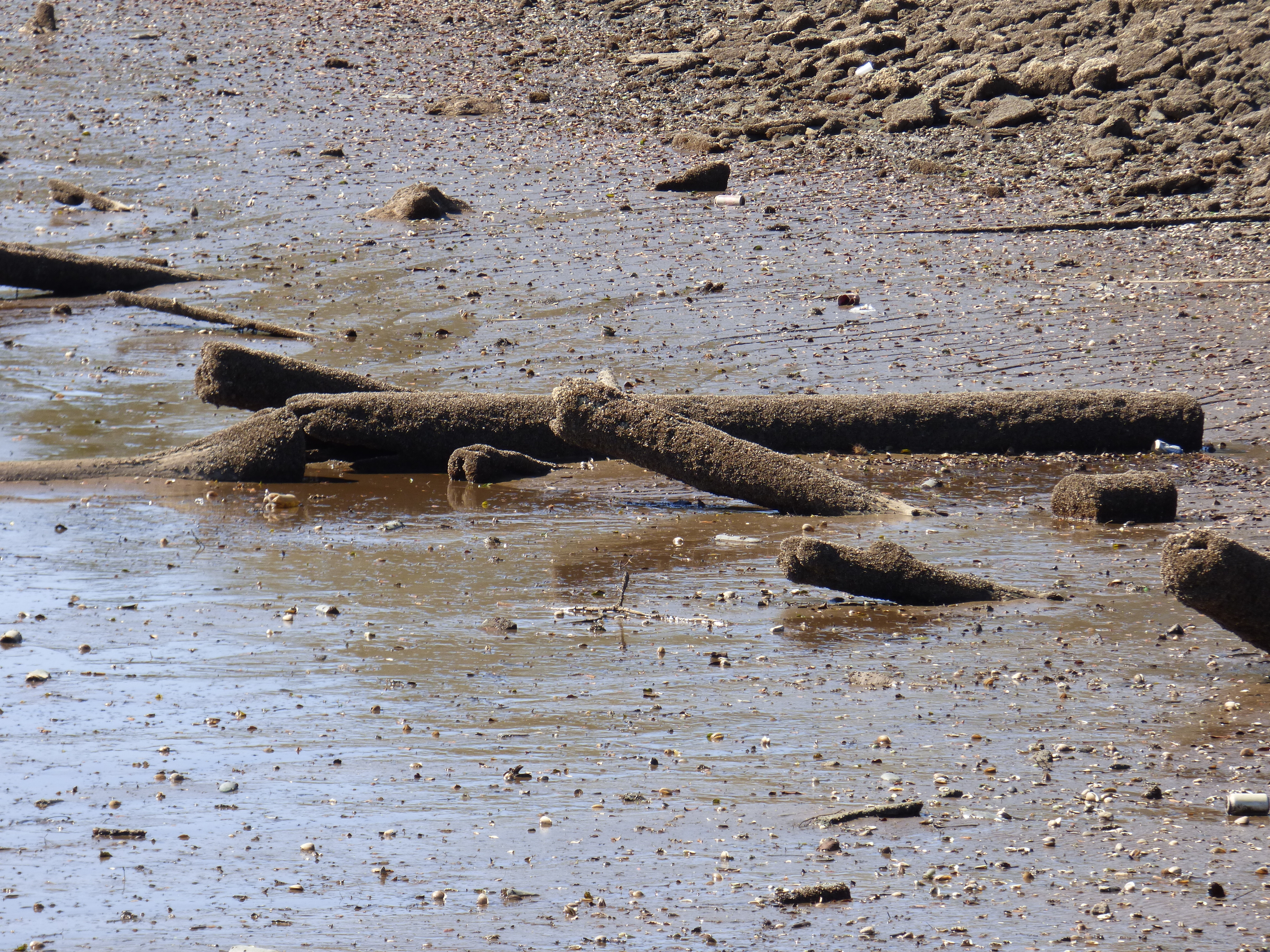 Jake’s loneliness carries him to the river. Once there, he follows the boardwalk to its final destination, Northlake, where elm and oak march down to the water like a troupe of Southern ladies with trays of lemonade and sweet iced tea. Come visit a spell, they seem to say, and Jake heeds their invitation. He sits on a rotting felled tree and lets his eyes roam over the rocks splayed before him, a standard mix of igneous, metamorphic, and sedimentary pebbles, stones, rocks, and the occasional strategically placed boulder. The low sky is almost a mirror image of the ground, but more organized, a cobblestone road that could be the underside of Heaven’s floor. It ratchets up Jake’s claustrophobia and feeds his dark isolation.

The rocks quell that feeling, slightly. A miniature, well-worn bicycle saddle appears in the rocks. Jake picks it up and identifies it as sandstone, rubbing a finger against its grit. An agate shows up in the guise of a caramel, like one of those from the pink-and-white displays at the grocery store he visited as a child with his grandmother. This one has been unwrapped, and one corner is pinched, like someone stole a nibble then put it back. Ridiculously, Jake touches it to his tongue and a chemical saltiness makes him spit and toss the rock to the ground.

He winds a smooth white corkscrew free from the earth and holds it close to his face, pleased by its playful shape. Who knows how many millions of years ago it was home to a crustacean, at that time a delicate shell. A perfectly oval pumice stone looks like a store-bought loofah, which isn’t so unusual but brings to mind the many shared showers Jake spent in campgrounds around the country over the years as a traveling folk musician. He selects a dozen tiny white quartzes and lays them out on a rock like a set of teeth. A moment later, he’s holding a river-smoothed piece of granite with a hole in the middle big enough to slide over his pinkie finger. Then, out of the corner of his eye, he spots a chunk of white-veined red calcite at the waterline.

He lets the rocks he absent-mindedly collected in his lap fall away as he crawls across the shifting ground on all fours. The closer he gets, the less rock-like it appears. It’s a cube of steak that fell off of a kebab skewer. He jiggles it out of its shallow grave and it doubles in size. His fingertips tingle from the treated river water, his middle finger resting comfortably in a notch on one end. It is a heart, in shape and color. Jake glances down the boardwalk, now at eye level, and over his shoulder at a wooded area up a slight hill, feeling an urge to say, “Hey, look!” hoping to get a witness. But he’s all alone. Still alone, always alone, but less so now that he’s found this heart-shaped rock. The irony doesn’t escape him; he’s found a perfect heart without a body, mind, or soul to go with it.

His palm throbs with whatever chemicals are used to kill mosquitos and every other livig creature in the water. He holds the rock with the thumb and middle finger of his left hand, wipes his right hand down the leg of his coveralls, then returns it to the rock, but the throbbing hasn’t ceased. Thump-thump, thump-thump.

He touches his left index finger to the center of the heart but isn’t sure he feels anything, so he pushes the grains of dirt and sand clinging to it this way and that and lays his left palm fully on top. It’s faint, but there is a noticeable pulse in both hands. Jake assumes a prayer pose, eyes closed, but because he doesn’t believe in God, he’s only wishing. Wishing on a crystal, concentrating on the calcite in his hands, thinking back to its beginning as lava gurgling out of a volcano on some Mexican coast, pouring into the ocean and crusting on the muddy bottom, compressed under millions more years of sediment and scooting across the ocean floor with the planet’s shifting plates.

Is the sensation he feels his chemical-stained hands or the heart-shaped rock itself? He folds his left hand open like a jewelry box and everything is revealed: lava to sediment, sandstone to crystal, and now organic, an organ, visibly pulsing with life, setting Jake’s heart racing. Whatever melancholia he brought with him to the riverbank has been lessened, a splinter plucked out, cool, cool water running down his back. It feels like love, or if not love, at least the endorphins released with love’s arrival, a ribbon of chocolate melting into his bloodstream.

He believes he’ll keep this rock as a souvenir of the moment the burdens of his world washed away in the river. He doesn’t know how long this feeling will last, but that’s not important right now. He stands and carefully slides the rock into the front pocket of his coveralls, placing it on the bottom of the deep pocket then extracts his hand and slaps it against the other one, loosening the crumbs of dirt and sand that cling to them. And now, the stinging  and throbbing has been reduced to a low level hum.

The sun sets and the cobblestone sky shifts from a glowing ashen gray to dull charcoal. Jake dreads the coming ten hours of thoughts circling his head like a model train, repeating, again and again, You are alone, You are all alone. He turns to head home to yet another night of silent dreams, regrets and embarrassments, and as he turns, a light flashes in his eye. At the place where the ground rises up to meet the wooded area, a tear seems to run out of the woods and down the hill, leaving in its wake footprints — boots, sneakers, flip flops, bare feet. Jake rocks his head back and forth to recreate the flash of the tear on the strip of earth cutting through the scrub that skirts the woods. He wonders what its sudden appearance could mean.

Being the curious type, Jake follows his cat nature to the path which blooms into a trail stretching out before him the farther he travels. He thinks back on many bored and lonely days spent standing at the edge of the boardwalk looking out over this landscape, never noticing the trail, only the artificially enhanced turquoise blue river running past a seemingly impenetrable wall of elm trees and live oak and tangles of sweetbrier, wild rose and scrub oak clustered and clinging to each other and the trunks of the trees.

Now he steps through a partition separating the world he knows and this new, unfamiliar one. Darkness as thick as a blanket falls over him, stops him in his tracks while his eyes adjust so he doesn’t tumble stupidly into the briar. His heart thumps with fear and excitement. His right leg also pulses, the pocket of his coveralls, where the heart-shaped rock presses against his thigh. It keeps pace with his own heart.

Jake reaches for the limb of a nearby live oak. In the darkness, it seems to curl Seuss-like to meet him. He dips around the limb and continues deeper into the darkness, toward the movements of a shadowland that are easier to make out when he doesn’t focus directly on them. He asks himself, What are these shadows? Or who? They have eyes that glow and long appendages that reach and receive. A shadow slithers past Jake’s legs and slips up behind him; another comes straight at him, pushing its scent, spunky, angry, lonely and charged, ahead of it. There are tongues not meant for speaking. Are they snakes? Vines? Tongue-shaped rocks? Minerals whisper million-year-old secrets Jake can’t make out. They live but they’re not breathing. They’re solid and stationary, liquid and spirit, hunters or prey with the wisp of the wind. They give, they take, and they’re definitely interested in the likes of Jake.

His chest throbs. So does his thigh. Jake doesn’t understand it, but he likes the sensation. He likes losing his senses, the sense of his humanness. He likes lurking and skulking. He likes leaning against tree trunks and stumbling over saplings. He likes dirt on his hands, on his knees, in his teeth, a gritty reminder of his loneliness, waiting just beyond the playground. He likes dropping his coveralls down to the waist, tying them loosely around his hips, the sleeves a bow for a white elephant gift. Jake likes the burn on his fingers, his legs, his cock as he’s handled in the dark by poisoned hands. Tentacles, talons, taints, proboscides, cloacae, natural and monstrous, fantastical and typical. Typical to Jake, who’s spent many hours of his life haunting dark corners looking for love. He wants it all, every bit of the slimy, smelly, dank misery rich with touch, taste, sound and smell. What you see isn’t what you get; there’s nothing to see here, and a whole lot more to come.

Sometime after the moon’s disappearance but before the sun’s pale return, Jake leaves the shadowland behind. He steps out of the woods and glances back to snapshot the memory, but the trail is gone and he’s standing in a mud puddle. His shoe strings hang limp from the tongues of his sneakers, so he sits on the riverbank and reties them, having first to pinch out the wet blackness saturating them. As he sits there bent tightly over his pointed knees, he remembers the heart in his pocket, but doesn’t notice its beat.

Arching back, he pushes a hand deep into the rock’s resting place and embraces it — his middle finger tucking itself familiarly into the cleavage along the top — but even before he clears the polycotton fabric he senses a change. The rock is still, lifeless, an amorphous, misshapen mineral; dead weight for the long trudge back to his lonely bed.

He tosses it to the ground. It clacks and disappears immediately in its sudden similarity to the others where it lands.

Jake stands, dusts his hands on the thighs of his coveralls, loosens the sleeves from around his waist and slides his arms into them. He checks his fly, zips, then meanders home, weary, disheartened, but a little less dissatisfied.