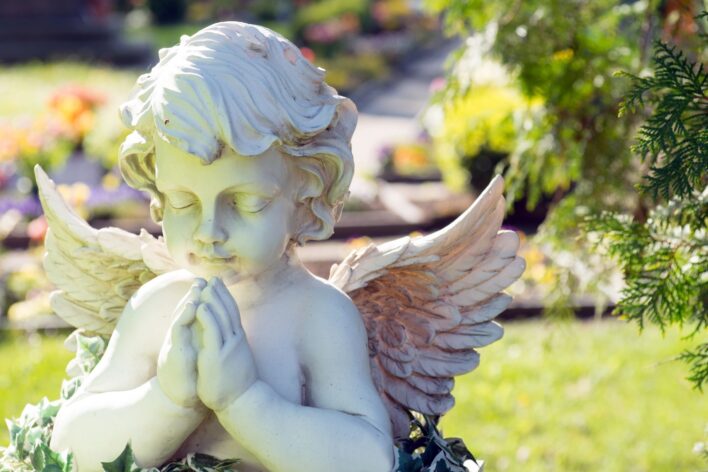 Southern Legitimacy Statement: I hail from the Deep South–Hattiesburg, Mississippi. While I now live overseas in Bangkok, Thailand, I make sure to incorporate Southern living on a daily basis. I cook biscuits often, read to my daughter in my best Southern accent, and encourage my colleagues to say “y’all.” It’s my duty as a Southerner, after all.

Guests padded in quietly with a low murmur which typically surrounds death, looking for the widow. Joyce sat stoically at the corner chair nearest to the casket but without a view of his face. She looked vacantly ahead, languid, and as lifeless as the dead. The line of mourners petitioned her head to turn slightly, and offered a variety of automatic condolences.

“He looks so natural.”

If she had the capacity to process the standardized pities, she might have politely smiled, but not now. Her pale face, long with grief, held sunken, listless eyes. Her brown hair had dulled with the year of his treatments and with nights unslept.

The child wore a handmade flat-purple dress with white trim. She was a wiry girl, six years old, with the blond hair of her father. Felicity nicknamed herself City because it was easier to say and because she wished she lived within city limits instead of the rural area against pastures and soybean fields. She wriggled in her chair, though trying her best to stay still because her grandmother told her to sit properly, whatever that meant. City felt the weight of sadness in the room and noticed that everyone talked to her mother. Some bent down to offer their sympathies to her as well.

“He’s always in your heart.”

“Be a sweet girl for your momma.”

Their eyes welled, and she did not understand. She reached up to hold her mother’s hand but hesitated, noticing the woman who resembled her mother, now only hollow remains.

City jumped down from the chair as her cousin Katie arrived. The children’s grandmother jerked around in her chair to scold the noisy children, but she caught the sight of the backs of their heads as they disappeared behind a thick blue velvet curtain. They giggled their way to the kitchen and crawled among the trees of old men who smelled musty and ancient. City snuck a box of sugar cubes down from the counter, and the girls hid under a table to let the sweetness melt in their mouths. Katie shoved six in her mouth and made faces while City covered her mouth to titter, ensuring their invisibility.

With renewed energy, the girls snuck out of the kitchen to the restroom, then tiptoed out to the stone balcony, then crept their way behind a wall of curtains. Katie suggested a game of tag; immediately, City hit her shoulder: “You’re it!” City bolted from behind the curtain through a doorway into a room with a casket that did not hold her dead father; when she recognized no one in the room, she backed out slowly to find her father’s room, though the thought that Katie would never find her in there did cross her mind. Katie was waiting for her, unnoticed and crouched behind the podium which held the book for guests to sign. She whacked City on the back with a slap heard a room away; City’s yowl could be heard further. Katie squealed and laughed. City lunged to tag her and fell to the floor laughing and rolling.

“Felicity Grace!” The room stood silent, on edge, watching closely as Joyce’s eyes fired, her cheeks now glowing with stiff rage. “What do you think you’re doing? How can you play around and laugh at a time like this?” Her voice escalated with each word. A pack of women moved in to support Joyce, ensuring her well-being and that of her child.

City, shocked into immobility, froze in a sprawl on the floor. Silence gathered and pressed hard upon the room with all present awaiting an explosion.

“Momma,” the child’s voice quivered, “if we can’t laugh, we’re as dead as Daddy.”

Some quiet gasps could be heard in corners of the room as eyes widened in prickly anticipation.

Joyce’s eyes glowed with a faint softness as an awakening slowly dawned, ending with a gentle smile. She nodded and whispered “yes,” then held her hand out for her daughter, who, still stunned, took it immediately. A heavy breath lifted the child off the floor and placed the two of them side by side to greet the next people in line.