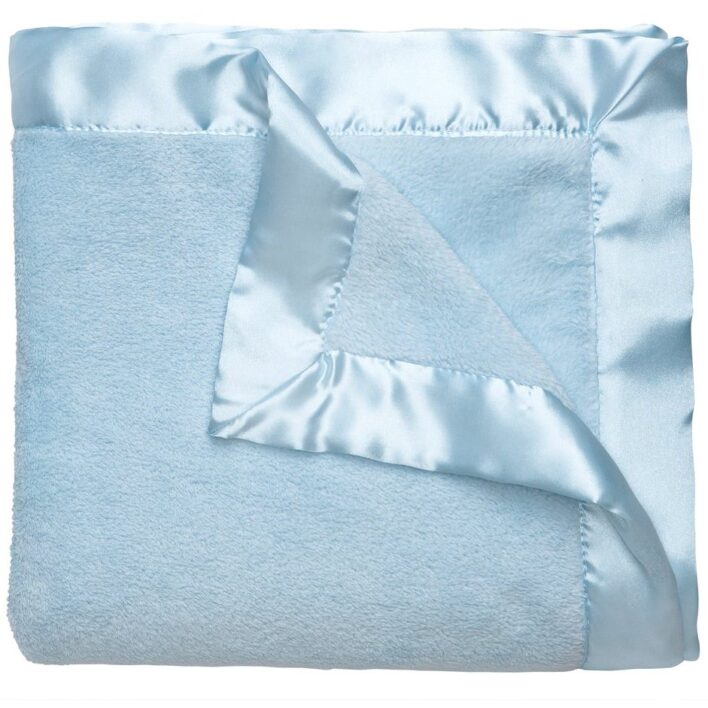 Southern Legitimacy Statement: Though I live in Massachusetts now, I was born and raised in Houston, and part of my heart will always be in Texas. I know some folks don’t call Texas the South, but I always have, seeing how my mom always had a can of bacon grease on the stove, my grandma said during each and every summer that it was “hot as Hades,” and my daddy always wore seersucker suits.

If my house were on fire, the first “thing” I would think to rescue wouldn’t be worth a cent to anyone else. A mere scrap of my family history — and essentially a scrap unto itself — it is irreplaceable because it offers something hard to find that money can’t buy: comfort.

My mother bore three sons before she had me. I can only assume that this track record is why my great aunt Isabelle, upon hearing Mom was pregnant again, crocheted a baby blanket from soft, pastel blue yarn.

This was the 1970s, long before ultrasound could have predicted my gender. And Mom likely wouldn’t have cared or planned around it anyway. As she recalls, “Back then, boys wore pink and girls wore blue, and it all turned out fine.” Today’s color-themed baby showers, neutral-painted nurseries, and personalized gift registries annoy her with their preciousness. I’m confident the present Isabelle gave to her and my dad after my birth was received graciously with little, if any, thought to its hue.

I only met Aunt Isabelle a few times when I was very young. All I remember about her is that she was extremely kind and she sat in a wheelchair. I learned later she had been in a terrible car crash in her twenties. Though I can’t conjure her face now, I can see her petite feet placed on the metal foot rests of the chair, always tucked into fuzzy booties rather than regular shoes.

The gift she handmade for me, which I imagine was placed in my crib with me soon after I arrived, has been a prized possession all my life; I can’t remember a time Blue Blankie wasn’t with me. I can’t remember whether I ever thanked her for it. I hope I did.

Because I loved the blanket so much, as a child, I found it difficult to get comfortable without it; I wanted to have it with me always and felt deeply insecure if I didn’t know where it was. Though I was discouraged from taking it to school past kindergarten, when being tucked in at night, it was a must. “Where’s B?” I would ask my dad anxiously each night after we finished my evening bath and put on my pajamas. “B” was the blanket’s official moniker in the early years, before I could easily articulate the entire word. Before we even read a bedtime story, I needed to have it with me. After B was securely under the covers, I could focus and relax.

Even when my big brothers snuggled together under our family’s expansive dark blue and green afghan to watch TV, I insisted on nestling under my separate blanket next to them. There are copious family photos in which I am holding B affectionately to my cheek, sitting next to it on the couch as if it were a pet, or spreading it over my lap like a chilly old lady might. B was actually big enough to cover my own whole body until I was probably three years old or so, after which it was used largely for hugging — and huffing.

That’s where things got a little weird. I was passionate about how B smelled, regularly burying my face into it and inhaling deeply. Especially when it wasn’t clean. Especially when it was downright funky. Especially when it had been loved to the point of becoming a grime factory. By which I mean it was full of cat hair, dirt, and my own nocturnal slobber; crumbs, tears, sweat, dust, and grass from the yard; whatever I had dragged it through for days or weeks on end. Eau de Blue Blankie was the only fragrance in the world that mattered. It made me feel safe, and I was fiercely protective of it.

My mother and I had big fights when she wanted to wash my blanket, stealing it away from me and ridding it of the odor I had so carefully cultivated. Extensive tug-of-war sessions took place, and I tried hiding B in several places I considered top-secret: under my bed, behind my stuffed animals, in the coat closet under the stairs. But she always yelled louder, pulled harder, and was smarter than me. Fresh out of the dryer, Mom would triumphantly thrust the blanket back at me, and I would glower. The fiber would be fluffy and scentless, downright unpleasant to my olfactory senses. So each time, post-laundry, I immediately began working on re-scenting it.

Which is probably when my brothers started calling me Linus. Like the Peanuts comic strip character, I usually clutched one end in my small fist, trailing the blanket behind me, a pale blue shadow. They thought it a tease, but I sort of liked the nicknames: Linus and B. My bedroom was also blue, painted a strikingly similar shade. Having been born into a family of boys, it all felt normal and appropriate. My adoration of my big brothers and natural tendency toward Tomboy-ism all feel like part of the same formative theme.

I am forty-five now and, to my husband’s chagrin, Blue Blankie is not only still around, it occasionally — though under only the most dire emotional circumstances — ends up with me in bed again. For years, I tucked it under my pillow when I made up our bed, but that got so creepy for him that I finally relegated it to the top shelf of my closet, where it is tucked among my purses.

I was nine when my parents split, and I regressed a little, insisting on keeping Blue Blankie close by as often as possible. Though I discreetly hid it in my travel trunk when I left for college, it had to go with me for that major relocation. When my brother David died suddenly just a few years ago, within hours I was reaching for B. “Security blanket” had a whole new meaning for me as I rocked in the fetal position, hanging onto that shred of fabric, that icon of my past, stroking it for solace.

When folded, B is scarcely larger than a hand towel would be. Its color has faded over time to a duller grey-blue, though it has withstood the years fairly well, with only one small stretched spot in a corner, resembling a hole. Otherwise, it is intact; its elaborate pattern of triangles set against each other to make squares — like two halves of a grilled cheese sandwich cut in half — are still held together with most of the original adjoining filaments, and the edges of the blanket are decorated with knotted tassels, only a few of which are frayed.

Though I haven’t taken Blue Blankie out of the closet in some time, I continue to be reassured simply knowing it is there. That small, soft artifact, a souvenir from a long ago time, connects me to my childhood self. It helps, knowing that something from that era — before divorce, dislocation, and death disrupted my sense of family — has survived.