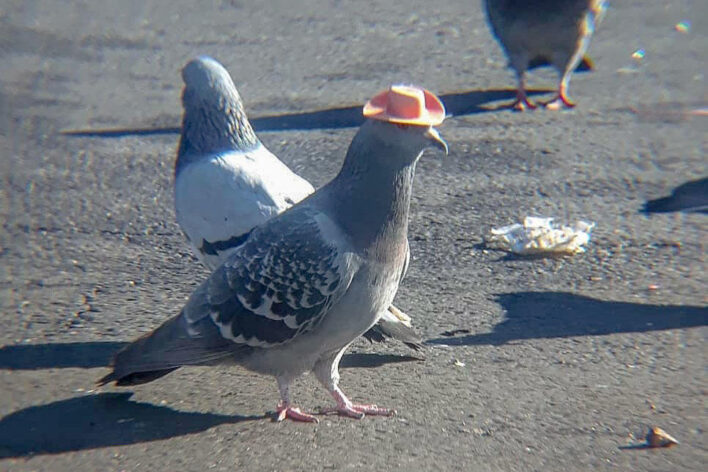 Southern Legitimacy Statement: Dad’s from New Orleans, my mother has roots in North Carolina. I grew up straddling the line between Southern Maryland and Washington D.C. I’ve currently been living in Michigan for 2 years. What I miss most is the warm weather and crab legs!

Pigeons walk when they should fly. I chase them around and they walk faster and faster, but they never fly away. They pretend to fly— they flap their wings like they are going to take off, then they just run. They’re not like chickens, though. Chickens can’t fly, really. Pigeons can, but they just don’t want to.

My grandma told me not to chase them. She says they mind their own business and it’s not fair to chase them and make them upset. She feeds them. She likes pigeons but I don’t see why. They don’t do anything. They don’t sing like regular birds. They kind of groan or make the noise you make when you gargle the spit in the back of your throat.

I sat with grandma when she fed them. There were a lot of them. They jumped all over each other, pretending to fly and everything when she threw a piece of bread. She had a smile on her face as she tossed them bread, like she was happy that they were eating her bread. She always got mad at me for eating her bread. “Close the bag, it’s going to spoil!” she says, and, “Don’t waste it!”

Sometimes when she doesn’t feed them she just sits there watching them. She doesn’t get bored though. I get bored watching them. That’s why I chase them and try to make them fly away. They never do. They aren’t like normal birds. One of them has red eyes. I don’t like that one. It has pink feet and red eyes. Grandma said he’s albino. Albinos have no color. Reds a color though, and so is pink. I don’t think he’s albino. He’s just pretending.
My favorites were these two pigeons that were grey and brown and white speckled. “Look! They’re twins!” I told grandma. She smiled, “Yes, they are. Why don’t you name them.”

They ate the same bread piece that grandma tossed to them. The albino one and the other shiny purple ones rushed over too and I got kind of mad. I tossed a little piece of bread farther away and they jumped over each other, flapping and gargling and the twins hurried up and ate their bread and half ran half flew after them.

Grandma laughed. “Well that is true!”

I took some crumbs from grandma and tossed them in front of my feet. Cookie and Cream hurried on over and happily ate the crumbs. If they could have done anything other than gargle, I think they would have said “Thank You!”

Pigeons are still stupid, but I liked Cookie and Cream. I didn’t try to make them fly away.