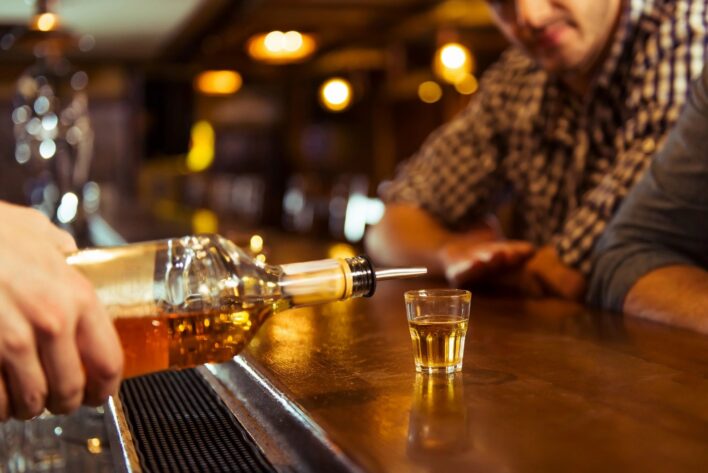 Southern Legitimacy Statement: “I am a Chicago native who lived in New Orleans for brief stints (the longest being nine months in duration) at various times during my twenties. Since I was a restless vagabond gal, I constantly moved and traveled to places where I thought I might get a better shake. Sometimes this tactic worked, and sometimes it didn’t. New Orleans always fascinated me, due to the city’s lazy, hedonistic pace and Gothic, spooky mystique. There is no other place in America that even compares to it.”

No one ever plans to end up as a dancer on Bourbon Street. It’s an employment choice born of pure desperation. I worked at a unisex joint called Sweet Mama’s. After only two weeks on the job, I despised every minute of my interminable shifts. I lurched around the club in stilettos like an awkward stork, as songs like “Strokin’” and “My Prerogative” pounded in the background.

Outside the club, drunken male revelers huddled in packs, clutching plastic cups of lukewarm booze. Occasionally, a daring fellow broke from the crowd, ventured into the club’s entryway, and withdrew, shaking his head. These men hailed from towns like Akron and Wichita, where female flesh was not on prominent display. They vomited on sidewalks, yelled obscenities, and grabbed women’s asses with reckless abandon. The French Quarter was their personal sin playpen, and the bars were open 24 hours.

Though I drank a copious amount of warm beer, nothing eased my nervousness. I was a particularly inept dancer and had no sense of rhythm. The owner had hired me without an audition. “Show up at 9 PM,” he barked. “Bring a G-string and tape for your nipples. You can get them at any novelty store.”

I’d imagined that strippers wore tassels on their nipples, like the dancer Benjamin dragged Elaine to see in “The Graduate.” An antiquated notion, since 1980s men wanted to look directly at nipples. Louisiana law was crafted to protect male eyes from the corruption of flesh, so entrepreneurs manufactured rolls of beige tape designed especially for breasts.

Before each shift, I meticulously tore tiny strips from the roll and affixed them to my nipples. Tape removal was excruciatingly painful, so I kept my aesthetic standards low. The end product resembled a child’s lumpy paper mache art project.

I didn’t give a damn how my tits looked. I hung out beside the door, one leg curved alluringly around a stool, then escorted patrons to their seats. Each drink order netted me at least a dollar, since the patrons were eager to tip. “When are YOU going to dance?” they asked.

“Stick around for a while, and you’ll find out,” I replied, smiling mysteriously.

Every hour, I strolled onto the stage with my sequined G-string and lumpy, taped breasts and began the ritual of gyration. The men leaned across the stage and groped for my vagina. Finally, I dropped to a crouch in front of their faces. Often, this simple maneuver brought a wave of cheering from the audience, but I couldn’t imagine why.

The other dancers were far better coordinated. My favorite was Tammy, a tough Cajun woman who had worked at the club for several years. She pranced with fierce assurance across the stage.

Tammy’s moves were more gymnastic than sensual. At the peak of her act, she ran towards the pole and grabbed it with both hands. After leaping into the air like a circus monkey, she threw both of her legs around the pole. Then she hung upside down, Kali-like tongue dangling towards the floor.

“Honey, these men are drunk and stupid. Ask them to buy you a drink, and they’ll do anything you want. We’ve got cases of Cook’s in the storeroom that sell at the grocer’s for two bucks a bottle. Tell them it’s the best champagne in the house and will only cost them a hundred bucks. Sit with them for a few minutes, then make an excuse to leave. The house splits the profit with you.”

50 bucks was a dazzling sum for 15 minutes of work. The setup seemed wrong to me. A moral compass was a liability in a place like Sweet Mama’s. Still, I felt sorry for the men, most of whom were lonely tourists. I resisted the temptation to partake in the Champagne Scam, but I often wondered if I should relent. Compassion didn’t pay the bills.

Saturday nights always seemed to last forever. I sat on my usual perch beside the front door and waited for my turn on the stage. The bouncer approached and flashed me a lascivious grin. Pablo was a short, wiry man of Puerto Rican descent. He took pride in his athletic physique, so his pectorals were always on prominent display.

“You look good. Girl, your dancing has improved during the past two weeks. You’ve lost weight, and you seem way more confident. I think we should have sex now.”

After two weeks at Sweet Mama’s, I was still unaccustomed to direct proposals, especially from staff. “I’m busy, Pablo.” My voice sounded apologetic, like my work schedule was the only reason for my refusal. “My shift won’t end for another hour. After that, I’m going straight home.”

“Aw, come on,” Pablo begged. “There’s a closet in back. You’re so hot. It’ll take less than two minutes.”

I couldn’t fathom why he thought I would be turned on by his promise of brevity. Obviously, Pablo didn’t have much to offer in the way of foreplay.

The loudspeaker blared my name. Relieved, I smiled at Pablo. “Sorry, I have to go.” I mounted the stage, and the jukebox roared to life. The opening notes of “My Prerogative” pounded into my ears.

As the tempo increased, I ran my hands down my thighs and caressed the skin underneath my vagina. I paused for a moment, squeezed the soft flesh suggestively. When I ran my tongue across my upper lip and slowly rotated my pelvis in a figure eight pattern, a cheer erupted from the audience. No doubt about it—my dancing HAD improved.

Suddenly, the music ground to a halt. I fluttered my eyes open and stared at the jukebox. Tammy clutched the plug in one hand, her face contorted with rage.

I had to hand it to Tammy. The woman radiated power, though she was only a dancer in a third-rate strip club. “I’ve told you a hundred times to keep your pubic hair underneath your G-string! Goddammit, I don’t want to go back to jail because of your bush!”

Overcome with shame, I gazed down at my vagina. Sure enough, a few errant, unruly hairs protruded from the edge of the G-string like neglected blades of grass.

“Girl, you need to learn to shave,” Tammy said, shaking her head. “I don’t know where you come from, but pubic hair is illegal in this state.”

The crowd erupted into laughter, as I stared at my vagina, dejected. A couple of men rose from their chairs and began to protest angrily. I glanced at Pablo, hoping for assistance, but he stood in the doorway, guffawing.

New Orleans had a reputation for being a city where any sort of aberrant behavior was encouraged, but nothing could be further from the truth. My pubic hair could send an innocent parolee back to jail. Louisiana’s indecent exposure laws had been drafted by sadistic, repressed lawmakers who probably hadn’t been laid in years.

I had to get the hell out of Louisiana as soon as possible. Until then, I needed all the money I could get. I gently pushed my pubic hair back inside my G-string. Tammy nodded her approval and jammed the jukebox plug into the wall.

The music resumed, and the patrons returned to their seats. I shut my eyes, placed my hands on my thighs, and continued my awkward dance.

Two more hours. Then I could go home, rip the tape from my tits, and grab some well-earned rest. Maybe stop at a bar first and down a couple of drinks for the road. There was nothing less glamorous than the life of a low-rent dancer. Maybe I should have gone to college after all. Professors couldn’t possibly be more critical than strip club customers.

On the other hand, I HAD lost weight. I gazed down at my slim, muscular thighs. They looked pretty damn good. Pablo thought I was hot. Fuck Tammy and the overgrown frat boys. I had the right to live life on my own terms. After all, it was my prerogative.