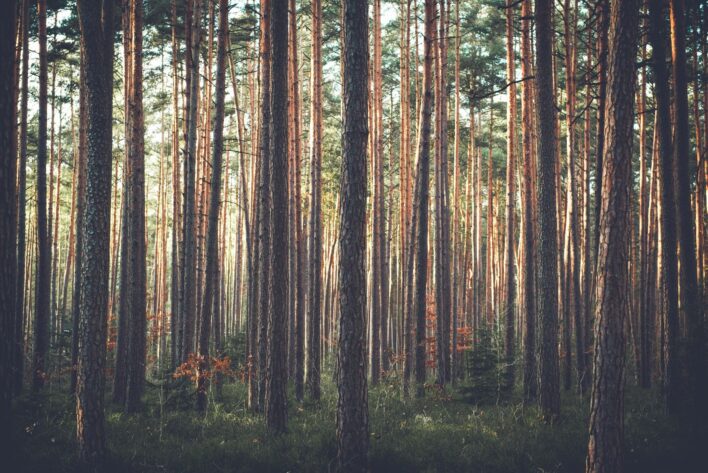 Southern Legitimacy Statement: I have almost always lived in the South (Southern Maryland, Southern India, Southern Florida, and Southern California). Give me an afternoon under live oak trees dripping with swaying Spanish moss, sweet tea, and a good book, and I’ll be happy. Humidity? Bring it on. It’s just part of life in the South.

Maybe we should have called it something grander, like “Twisted Oak Estate” after the oak tree at the curve of the driveway. Or “Raspberry Cascade” after the way the wild raspberry plants grew when full and ripe. But we never did. Our weekend property was always just “The Land.”

In 1968, the view from our first apartment was a parking lot, other apartment buildings, and the complex’s trash shed.

Even closing our door tightly didn’t shut out the shouts of children as they ran up and down the echoing hallway only a few feet away. Harsh arguments often erupted from behind other doors, and babies wailed. Noise was everywhere.

One day my husband said, “We need some peace and quiet. The guys at work are always talking about owning property. An older guy told me he wished he’d invested in it when he was our age. Maybe we could buy a few acres so we can get away, maybe even plant a vegetable garden.” I nodded. Getting away sounded like fun. The decision was quickly made.

We checked the classifieds every Sunday, visited several places, and finally found what we were looking for: The Land.

We bought it from a laid-back country man who drove us around in a battered pickup. His clothes were worn, his truck rusty, and his shoes came from two different pairs—one brown and one black. As we bounced over dirt roads and hiked up hills, we wondered if the many properties he enthusiastically showed us really belonged to him.

It turned out they did, and we became the owners of ten wooded acres on Elk Ridge Mountain in Maryland, across the Potomac River from Harpers Ferry, West Virginia, and a few miles down the road from the Civil War towns of Antietam and Sharpsburg. The acreage also backed up to the Maryland Heights section of Harpers Ferry National Park.

The property was raw land, the unusable, rocky, hilly woodland surrounding a farm. No phone, no electricity, no water, and no sewer. We were what is now called, “off the grid.”

We soon erected a 12’x24’ one-room cabin or “shack” as my mother-in-law called it—bluntly but accurately. Not a single wall was straight; set a marble on the floor by the door and it quickly rolled downhill to the other end of the room.

Yet that didn’t matter to us. We had a place of our own, and were able to step away from our day-to-day lives and go back a hundred years to simpler times.

After our children were born, we spent more and more of our weekends escaping to The Land. In spring, we tromped through bare underbrush to enjoy redbuds and dogwoods that bloomed among the new green leaves of surrounding trees. For a few years we planted a vegetable garden, tucking the little seedlings between rocks and boulders and watering them carefully. The local deer feasted like they never had before.

We picked pawpaws from wild pawpaw trees and made a pie, guaranteed by the cookbook to be “the best, fruitiest pie a human could ever taste, a pie so good that neighbors will steal it from your windowsill.” We each took a bite. Maybe pawpaw pie was an acquired taste.

We collected black walnuts, learning the hard way that the outer covering contained a stain that didn’t wash off no matter how hard we tried. It had to wear off…slowly.

Later we had the electric company run service to the cabin. Sunlight shone on the hill where shady trees were cleared to bring wires from the road, and wild raspberries sprang up. We began a family tradition, and each year invited our friends when the berries were ripe. Standing in the summer heat, we’d pick until our containers were full. Then it was time for a campfire, potluck, marshmallow-roasting, and maybe a few songs, if someone brought a guitar. Everyone left with the berries they’d picked. I usually turned ours into a delicious tart jam, and once, a raspberry wine that was pretty much undrinkable.

When the trees were bare, we climbed to the top of “our” mountain to the ridge of Maryland Heights. There we discovered the foundation remains of a Civil War artillery battery. From that location we could see Harpers Ferry on one side and the Potomac River curving around the other, much like soldiers had done over 100 years before. I stood there, engulfed by the history.

The Land was down the road from the farmhouse where John Brown plotted to take over the armory in Harpers Ferry near the start of the Civil War. We wondered if he and his men had marched down the very road that bordered our property. Could they have sipped from the spring that flowed from our hill?

One year a man named Jesse, whose extended family lived up and down the gravel road, built a house on the flat acreage across from us. Each year he turned up bullets, cannon balls, and other Civil War artifacts when he plowed his garden.

Jesse knew the land. He invited us to come to his yard to see how his family made apple butter over a wood fire. Many of his relatives were there for what was almost a celebration on a crisp autumn day when the leaves were turning yellow and falling. They stirred the bubbling apple goodness with a paddle attached at right angles to a long handle, filling the air with sweetness.

We found a man-made flat area dug out of the hillside in the very back corner of the property next to a running creek. When we came across rusty barrel hoops among the weeds, we excitedly told Jesse we’d discovered a Civil War camp.

“Nah,” he said, shaking his head. “Moonshine.” He grinned. “Know that little road that goes back part way?” We nodded, thinking of the flat, weed-covered trail that started near our cabin. “It’s where they ran moonshine. Right down that road. ‘Course it wasn’t grown over then.”

That’s the way it was at The Land. Any time we wanted, we could step away and go back in time to a world filled with history, discovery, and wonder, a wilderness to explore and share. Our woods were so peaceful and quiet that when we stopped the car at the top of the driveway and turned off the engine, we heard the gas sloshing in the tank.

The Land served us well. Bought before our daughter and son were born, we finally sold it thirty years later. Yes, its value had increased tremendously, and the money from the sale helped us retire and move farther south. But we agreed that even if we hadn’t made a penny, it was worth it.

It was, for those thirty years, a place of escape. A place that welcomed us. A place where we belonged.