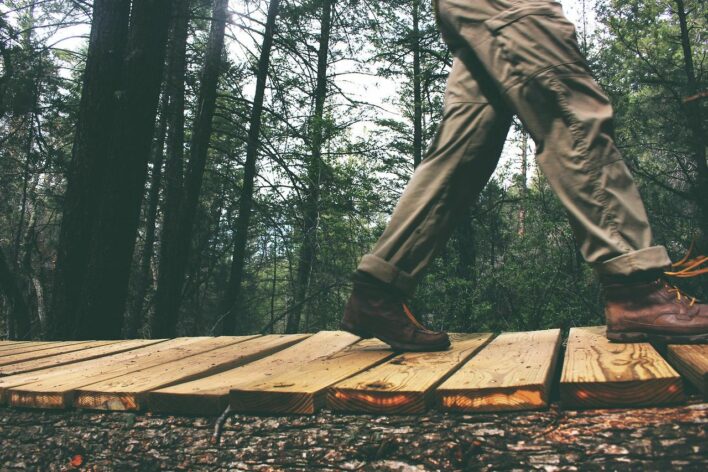 Southern Legitimacy Statement: I still say y’all, ain’t and I reckon. I live near Tampa and I would say that is nearly southern as one can get, although I don’t live near a swamp.

Calls From the Southern Forest

Today, in the forest, I happened upon something that triggered a memory of an old event. I could not stop thinking about the tree house, about seven feet above the ground, cobbled together in a massive live oak. I climbed up and sat on the splintering wood and crooked construction. During the rest of my walk, the image of it flashed with other images of back around fifty years ago.

My mind is in constant time travel mode when I am in a forest, more so than when I am on a plateau or in a field, body of water or any other spot of nature. I suspect because I loved being in the woods as a kid, especially the southern forest with its musty oak and sharp pine aromas and the Spanish moss either draped like deadweight or dancing like campfire smoke. As a boy I inhaled the faint and sweet odors of decaying leaves and moist, dense undergrowth. All of those smells still refresh me. And the sounds! The soft songs of birds, mixed with the electrical buzzing of cicadas and the hush of an occasional breeze through brush and leaves. Nothing human to interrupt what seemed to me like being in a dream. It was the perfect being alone, without the burden of loneliness. There was too much to do, too many large pieces of bark or piles of leaves to search beneath, too many stones to turn, too many holes to poke a stick into. Too much to do to fill the time that loneliness could occupy otherwise. The only alert was when everything went silent and I was there in the middle of it all, as though deaf,  remembering back to silent times when I worried about what could be happening in those dangerous missile crisis days, fearing a silent radiation death that would reach out to burn and melt me, from some blast far away. But, like in the 1960s, sounds always returned and troubles of the adult world were pushed from my list of concerns.

Mostly, the forest provided a sense of security beneath the span and power of its massive canopy, at times woven so thick that midday dulled like dusk. My family did not go to church, so I did not know the feeling of peace and silent joy that people who did go claimed to find inside their wood or brick buildings. I do, however, imagine that it was much the same way I felt in the forest. In a sense, I also had an oak pew, but I had a different choir, a different candle, a different lesson to listen to and learn. To this day, I still carry the same feeling of security and peace when I walk through woods similar to those of my youth. I often think about once again folding a couple tablespoons of peanut butter inside a small square of wax paper, so I can take it from my pocket and lick it off, when I get hungry during my exploration.

So, the tree house, that trickster, conjured up spring of 1967, a couple months before I turned thirteen and the day I started my transition from boy to man, not physically or chronologically but in psyche. My mother, a year and a half removed from divorce and after a string of men wandering into and out of our lives, had gotten remarried to Carl. I liked him and he, having no son, seemed to find a decent substitute in me. He was twenty years older than my mother, a tall, thin man of Swedish descent with white-blond hair and blue eyes. He was a civil engineer who, according to her, made over fifty thousand dollars a year, a windfall of fortune in times when the cupboard was bare, literally, for my brothers, sisters and me.

We were making a Saturday trip to Cedar Point, a large amusement park in Sandusky, OH.  It may as well have been Disneyland or Europe or South America, since we had never been to anything like that before. Three or four miles into the trip, Carl pulled the Chrysler Imperial onto the shoulder and said, “Come up here. I’m going to let you drive a little bit. “   My mother did not protest, so I settled into the driver’s seat, skootched it up so I could reach the pedals and listened as he gave me some basic information—gas and brake pedals, how to put the car in drive, stay to the right of the line in the center of the road and don’t get to close to the car or truck in front of us. I put my foot on the brake, pushed the D button (the Chrysler had pushbuttons on the dashboard instead of a shift handle on the steering column), looked behind us, moved my foot to the gas pedal and pulled onto the road. It was slow going, at first, 10 mph slow.  “Give it a little more gas…..a little more…some more.” Before I knew it I was going 40 mph. It was a jerky ride, with all my quick corrections of the steering wheel. I had been told by another kid that drivers were supposed to line the center of the hood, or the hood ornament if there was one, with the line on the right side of the road. That was what I did, all the while wondering how a driver was to coordinate staying on the road and seeing what was up ahead. Carl noticed where my glances were directed and when I told him about my friend’s advice, he told me to just look ahead and let my eyes follow the center of my own driving lane, that my steering would follow my eyes. He was right. My lesson lasted maybe four miles and ended with him saying, “You did well. Really, really good.”

A little over a year later, Carl would be history, cuffed and stuffed into a police cruiser in front of our house. He forgot to mention he had another wife in Chicago. I would live with my mother and siblings for the last time over the next couple months and, in a little over a year more, I would add 100 mph to the speed of that day, as I ripped over the roads of northwest Ohio. That short drive installed in me not only the quest for speed, but the need to be more than a boy, the desire to put behind me the coming and going of men and the constant going of a childhood that traveled the highways of confusion, uncertainty and instability. I cannot say why the treehouse brought out that particular memory, but it did. It certainly did. And I was glad to relive that particular time in my life.