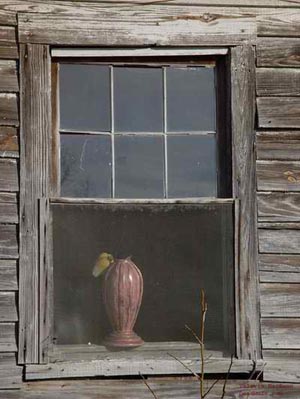 My Southern Legitimacy Statement is that my work has appeared here before, and I have read in NC, vacationed in NC, have baby-sat in NC and will visit there again to see three of my ten grandchildren. My military training was with Tennessee’s 278th Infantry Brigade at Fort Devens, MA, and was one of the two “Northerners” on the undefeated post football team before assignment in Korea.

The Last of the Roses

That morning I was a thorn between two roses.

My wife Kay sent me out to water the flowers along the front and the driveway side of the house, and my mother, just now marking her first year as a widow and not yet a pest by visiting too often, coming for the day. It was a Saturday, a lazy day off and I wanted to fool around for a while before the day got going.

“Not before your mother gets here,” Kay said, blue eyes talking too. “She’ll take one look at me and know what we’ve been up to. She’s always known.” She said it the way some women let a secret trickle and go on about its way as if they’ve not let it go at all. The faint smile rode her cheeks, the corners of her mouth, lit her eyes with promise for later.

She added, “It wouldn’t be fair to her. She’s only 48 years old and she’s not dating yet.” I got a smooch in and she burned me by leaning into me in the same tumultuous and provocative way she had learned as a fifteen year older on our third date. With me that experience would carry her forever. Anyway, it had only been a couple of hours since she burned me all over. What the hell, it was Saturday and Kay was not yet round, the promise of roundness not yet showing in her frame, the puma of her being easy and agile in the kitchen where her moves were unavoidably attractive. She cupped me on parting, her mouth ajar.

I went outside to survey a different landscape.

There, in the midst of barren green leaves, in the huddle of briars and brambles of both my rose bushes trussed against the house, in the remnants that August usually leaves for deserted and desecrated rose bushes, flaunted a single rose, like a tile from a resurrected Machiavellian mosaic,

Overnight, from a secret source, hardly anemic in color, bred and bled, perhaps a hybrid within time or beset with passion, I swore it had bloomed and lit up under cover of darkness. This marked a ritual I was never privy to no matter how hard or long I tried, patience no matter, or an accountable torch. The crop of outstanding American Reds had earlier leaped in late May or June’s first week and the last one of them, limping, maimed and wounded from a war of heat, wilting the way some seniors walk the walk, and supposedly the last one, had disappeared by early August; summer cut to the quick.

Roses, to the initiate, are signposts forever.

In the start of May they had rouged up, roseate, primrose, and suddenly, after one full weekend of rain and a succeeding burst of heat and solar touch, had turned Adrianople red. God, I loved that smash of brilliance, and, against the white house I had painted myself only a while ago, they gelled like some runaway blood had found the stopgap, had congealed their smashing redness. Somewhere in that spread of summer I rocked with pleasure a number of times, knew pride for a bit, measured my watering can’s faithful efforts.

I’d not let that rose go onto its unavoidable destiny. I knew, at first thought, I’d pluck it, bring it inside, put it in a glass for Kay to look at for a day or two, to measure how much I loved her.

I reached into the bush for it. A poem of sorts found me muttering. Oh, I would slake a thirst with this one rose, slip it from the vine, give it to my Kay, go wispy-eyed with it to her, a gift from Mother Nature herself, past preening, secluded, granting the last favor from a summer’s faithful watering of her bushes. It was a remnant of the first order, a flamboyant remnant, and I would score Kay’s kitchen with the late blossom. In my hand I could measure how August carnage had done its work again; the roses, once so radiantly red between pairs of front windows, leaping out past glass prisms, had died, had vanished, had been vanquished by incessant heat. For all of June they had thrilled me and an occasional walker who noted their florescence, the antics of their immediate spread, the prismatic dependence on rain and sun the way grand alliances sally forth in a burst worthy of celebration’s gunfire. I casually remembered how in latest July, in one weekend of revolt, the change had begun, a change in shade, a wimping of a petal now and then, a complete fadeout from a rose near the bottom of one tendril, as if an animal had watered there.

That revolt went on until all had been overcome.

I stood with the rose in my hand, and a shadow in the window saying Kay was behind the glass sharing my love. I could taste her. Morning had not let go its root. I can smell now at this recall the air that was about me at the moment; density of past roses, new cut of grass, a maple tree’s sweetness hanging over me, my wife’s oh so wanton residue. Contentment came. Life swinging its easy way with me. I had my treasures.

A soft plushing of tires caught my ear and my mother came swinging her car into the driveway, seeing me with the rose, deciding like old times it was hers. Her face, so recently tired for long stretches, glowed with pleasure as she looked at me and my tribute. On a number of occasions she had said in warm demand to my father, another rose grower, “Save the last rose for me.” In turn I had done the same thing for her for a few years. Then Kay, one night in my junior year of high school, had pressed herself against me.

I looked up at the window. The shadow moved. The window flew up as my mother stepped out of the car. Kay leaned out quickly beside one bush and said in high animation, “He’s got the last rose for you, Carol. The last one on the bush. Isn’t he the sweetheart.”

For all I care, Kay can get around anytime she wants to; she doesn’t have to be the puma her whole life.

But I’ll bet she makes a run for it.

I have heard old men say the scent of a rose, like its vision, moves mountains, prompts pumas.