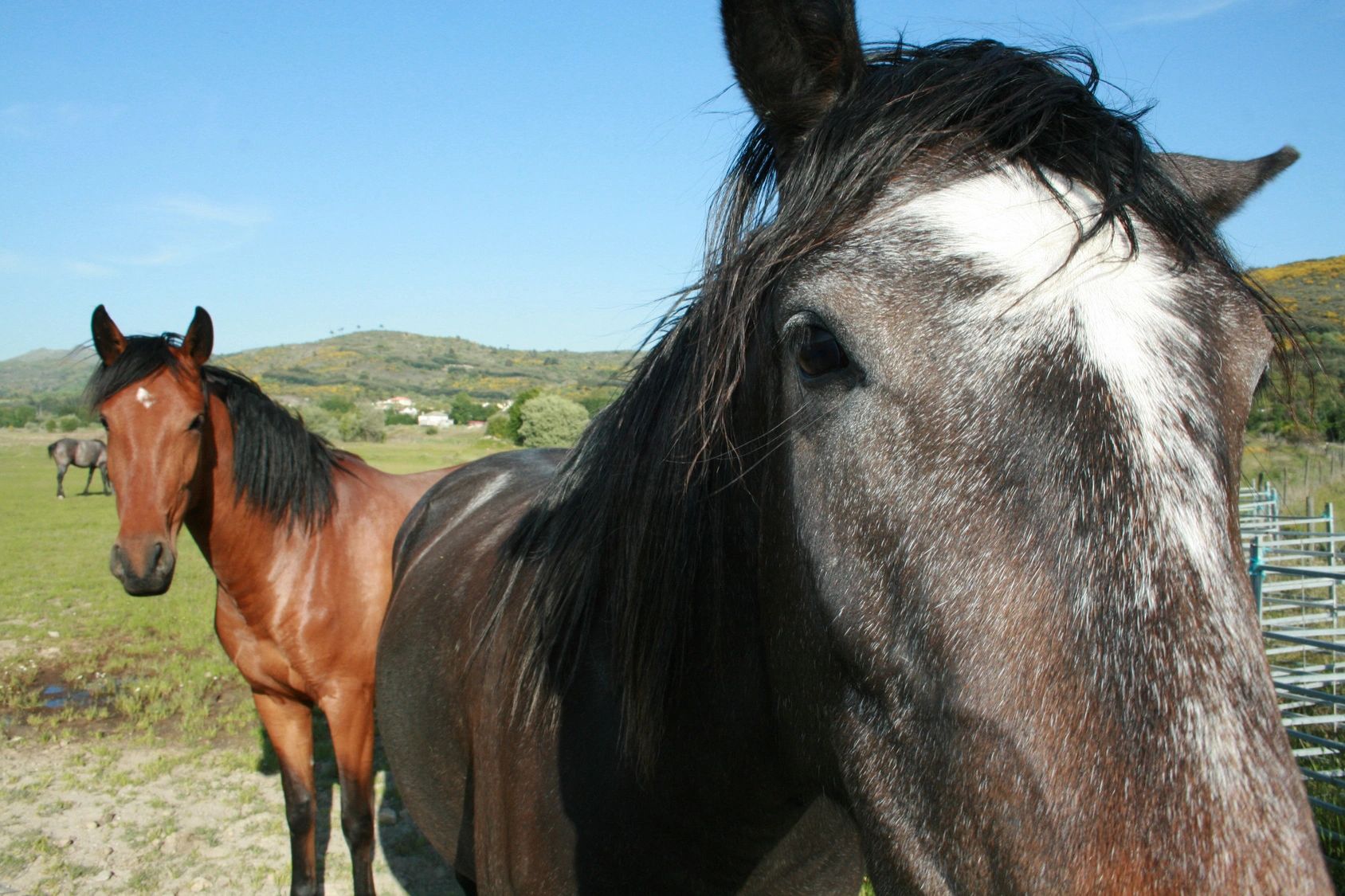 Creek On The Right

All but one of the horses stand in the stable. Shielding the fireplace’s glow, Tom double-checks the window. Often in winter light and in sightlines from the living room to the pasture, the palomino can disappear. He places the roll of duct tape on the box marked BOOKS and steps onto the front porch. A head or rump silhouettes stalls one, two, and four; the two brownies’ breaths curl in the air. Tom moves closer. The smoke-gray quarter horse has slipped out.

“He still has a basket of fruit,” RJ says, opening the door, his boots clomping from the kitchen, blue rag by his hip turned black. Flecks of food grease his jeans. “Hasn’t spoiled.” The rhythm of him tossing an apple counters the silence of the nearly emptied house.

“We’re missing Gunny.” Tom throws his chin at the gate popped open under the moon. “I thought I locked it. I know I had my gloves on.”

“Those slick Guccis you still wear?” RJ grins while tightening his hoodie until his beard bushes out.

Tom demurs, grabs flashlights, and follows his brother to the halters. “Hold on,” he says. He jogs back to the house and heads for the kitchen. “Dad’s horse,” he chuckles on their way to the trail.

Sleet on the ground deepens the darkness as they stumble through the woods. Neither flashlight reveals hoof tracks stamped in the middle or tumbled off into thicker brush and sinkholes. The rope dangles over the creek where they crossed when they were kids and where they now help each other with footing on icy rocks.

Tom searches the water and moonlight and listens for more than owls; he briefly loses his balance. Far from that water’s edge he hugged his father and brother goodbye before he went away. When Richard Sr. neared his end, the state granted Tom a one-day visit. Final approval from the warden, paperwork, and the drive to the hospital ate up most of the day. The prison van idled in Atlanta traffic, ribboned through counties, and stopped once for the guard to use the bathroom at a rest stop filled with blue sky and flowers where the summer sun backlit the metal frames crisscrossing the van’s windows.

They spin around as leaves crunch behind them—a large trunk snapped at its roots soaked with lichen like dark-spotted wings too frozen to fly.

Farther on and then off the trail, limbs and frost crackling, RJ says, “We already cut through here.”

For a few seconds, a gust of wind shakes the woods and water.

“Come on out, Gunpowder!” RJ yells, shivering. “We know you’re cold and hungry like us.”

Tom trips on a root; his light exposes a jagged rock shimmering with sleet. He stands, blood seeping through his pants, and moves closer to the space in the distance. The bolt of blackness stretches between branches and the silence and the moving of things seen and unseen. Panting, favoring his leg, he hobbles forward and braces himself as if he could catch a shadow that has enough left in its core to reach him, racing his way. His temptations lie elsewhere in the past but have come with him to each sliver of a new opening—not to keep them but to scatter them and step through their traces. He pulls one apple from his pocket and crunches it, his mouth wide open, exaggerating his slobbering and clicking tongue. “Too bad Gunny’s not here to enjoy this. Red delicious too. His favorite.” He hands a bite to RJ who chomps down.

“Tell me ‘bout it. This would hold me over until that big ol’ breakfast of oats and barley.” RJ eyes water from the cold. “Might even fart a bit from all this joy. Give Tom’s horse a real stinker…that pretty palomino.”

Leaves shift in the distance.

Talking and crunching louder, they pass the apple back and forth; twigs snap closer.

A horse head appears before them like black satin pulled from night, the soft neck stretching toward familiar shadows.

His hands shaking, Tom takes the halter from RJ and shuffles closer.

The horse jerks back and neighs.

Gunpowder rocks forward but then slumps down; his eyes bulge bloodshot.

The brothers dig out the horse from mud and brush and unsnag his dark blanket from branches as he whinnies and shakes melting sleet from his mane.

On the path toward the stable, RJ flicks the gate and its rusted, crooked pin. “We can tackle this tomorrow after a lot of coffee and whiskey from that cabinet over the stove.”

“Speaking of, when I was cleaning out the kitchen, I found some of your letters.” RJ pops a top on a tobacco can. “Do you want ‘em?”

Tom rubs Gunpowder’s muzzle as the horse finishes a fresh apple. “Did he read them?’

“Every single one. And when he couldn’t, I read them to him.” RJ offers the can.

Tom takes a pinch as they settle Gunpowder among the other horses, whinnying with their sleep disturbed. “Damn.” He chokes as he takes off his gloves to fish out the wet wad. He flicks it, steaming, to the ground. “It’s been a while.”

RJ smiles, pats the smoked-colored horse, stretches his arms in a V, and trudges to the house near the patch of garden that holds their parents’ ashes.

Tom extends his hands under Gunpowder’s nose; the horse’s warm breath slides between his fingers, around and under him, where he stands and where he stood.