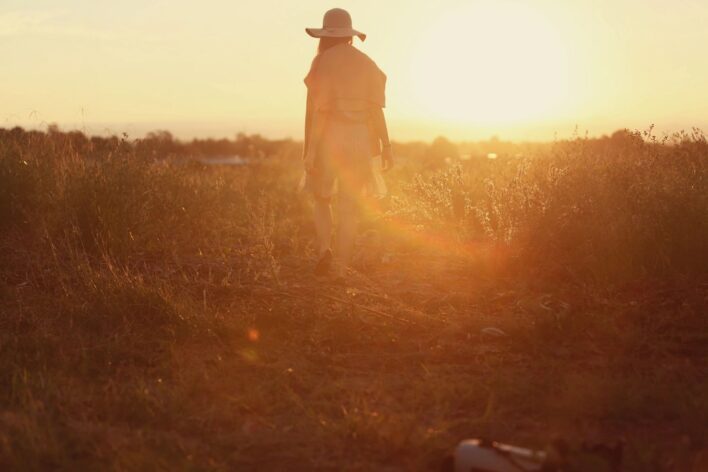 Southern Legitimacy Statement: I was born in Illinois against my will and fled that state for a better future in Texas. When family ask if I’ll ever return there, I can’t stop laughing at them, not with them. Why would I want to return to a place where it snows so much and you can’t fry an egg on pavement?

She sat in the same spot she had for the last fifty years of marriage. It was her place, at the end of the tattered couch held together by a violet-colored slipcover, next to the small, oak table. On the other side of this table, always dusted daily per her husband’s request, sat his recliner, empty these past several weeks. The recliner’s leather was smooth and clean because it was only two months old. Rather than keep the leather free from creases and other wrinkles, he always elected to purchase a new one. This was his eleventh one.

A lamp stood atop an ivory, laced doily, his mother’s. Next to it was the phone, likely one of the few landlines left in the county her grandchildren once joked. Over the decades, and now weeks, fewer and fewer called who weren’t family, but she didn’t mind. This was the price of marriage, her own mother once quipped to her. Your job, yes, her mother used this word, job, was to take care of your husband. Leave the gossiping for the teenagers. She didn’t mind.

She recalled the first time she met her husband. He was older than her by ten years. Tight jeans, a starched white button-up shirt, and crowned with a full head of lush hair, the kind her girlfriends dreamed of running their hands through one day. These were the first three memories of him, images that burned into her subconscious, at that age when protocol dictated the necessity of a permanent and socially-acceptable relationship. She never asked or even considered why a thirty-year-old man wasn’t married yet. Her parents were anxious to jettison her from the house to feed one less mouth. They weren’t of means, but no one in the county really was either, except for a few choice families. His family lacked status, but had willed some property to him for the opportunity to make something of himself. And so he did, acquiring small plots of unused or disregarded pieces from surrounding owners until he had doubled his kingdom. But a king needs a queen.

Sensing her frenzied interest, he approached her father one day to ask for his daughter’s hand in marriage. The answer was quick and short, and with it, preparations began for a courthouse wedding, as a church one, certainly more respectable, was too expensive and not quick enough. Within a week, the newlyweds crossed the threshold of his meager farmhouse and into a new life.

The woman sat still on the end of the violet slipcovered couch. Her lips pursed, she dusted the fabric of her dress with a hand, carefully going along the grain of stitching. Her husband didn’t approve of disheveled garments. She agreed, as she often did on such matters. A person should always look their best, even when no one was around to judge, she silently mused.

So she sat and waited.

Their first child was born one year later. Surrounded by a nurse she knew she’d never become, and a mother-in-law at her husband’s behest, the woman birthed a daughter. When her husband discovered the sex of the child, he expressed disappointment. Boys are better farmhands and a girl’s future marriage costly, he contended. Three more children followed over the next nine years: two other daughters, and finally, a son.

Her dream had been to earn a degree to become a nurse; children could come later. But like all dreams from childhood, reality dictates unforeseen routes marked on no map. Rather than chart her own path, she allowed what so many others had done before her: follow someone else’s direction. Her husband needed a breakfast in the morning before fieldwork. Lunch to sustain him, and dinner to regenerate from the hard, back-breaking work of farming. In between these segmented moments, children needed feeding. Meals could never simultaneously be served as her husband demanded eating first. Meals could rarely be held at the same table as her husband who ate in front of the television so he could yell at the news broadcast. And then there was the cleaning…

The woman smiled and glanced around the living room, rapidly inspecting to ensure that magazines were neatly stacked, the floor rug in front of the fireplace recently brushed, and the clock on the mantle held to the exact time. Satisfaction washed over her face allowing a slight grin – but not too wide. Decorum required the absence of pride. But it still felt good when she glanced at the symmetry of the doily on the table next to her, and the phone next to the lamp.

So she sat and waited for the phone call.

After the birth of their son, her husband decided that the farmhouse couldn’t adequately hold four children and two adults. So, he worked with an architect and began building a larger house designed for his tastes. He reasoned that since the children would eventually leave the house, they had no need for large bedrooms. The two oldest girls would have to learn to get along, and his youngest daughter and only son had only one duty and that was to listen to their father. The woman suspected that his true intention was to design his family out of the new house. When she asked him about this, he replied curtly: a king needs his castle.

So the living room became larger with a new altar for a king-sized television. Another new leather recliner but not a new couch. She could place a sheet over it and no one would be the wiser, he commanded. Dinners at the table, already rare, became seasonal, and then yearly. Even for holidays, when the children and grandchildren gathered, he sat in his leather recliner watching and muttering to himself about the state of the union, all while shoveling food into his mouth. Like a black hole capturing all surrounding light, his gravity pulled her toward him, until she sat near him on the couch, quietly eating while everyone else laughed and enjoyed their meal at the dinner table. At first she made excuses for his behavior, but soon gave up. There was no denying his selfishness, and he wasn’t about to change.

The woman inhaled deeply and wondered about her own choices and actions. How if she chose not to make herself available all those decades earlier, there’d be no marriage and no children. And no grandchildren. Or a granddaughter. She exhaled.

The first time her son told her, she refused to believe him. She thought deeply of missed signs, afraid she was somehow responsible for this. Recounting all the times in recent memory her husband left to visit their son to pick up his rent payment, and who lived with his own family just down the private road between the two houses, the woman struggled to make sense of the accusation, feeling faint and nauseous. Her hand grabbed the table next to her place, anchoring her body but neither her mind nor spirit, which screamed to flee. She caught herself shaking her head in disbelief. Then her son showed the letter from her thirteen-year-old granddaughter.

Her hand covered her mouth and tears fell onto the paper as she read the details of the letter, outlining each violation. Each visit when grandpa took time out from working in the fields to visit his own flesh-and-blood. Was this what he thought about on the tractor, alone with his thoughts, she wondered. When confronted, he first denied and yelled from his leather recliner. But then when handed the wet-stained letter, he slowly and willfully nodded, like a teacher checking for accuracy in grammar and spelling.

For the past several weeks he called from the jail, inquiring about the cattle or reminding her that the tractor needed an oil change. She dutifully wrote it all down for her son to help her manage, as her three daughters had long since fled the house and now had lives and families of their own. They returned to help her with the transition, but avoided staying too long. When her husband called complaining about the food, she listened. When he called sobbing hysterically after accepting a plea deal that would keep him imprisoned through the end of his life, she listened, all the while feeling the life drain out of herself.

She placed her hand on the receiver and paused, hearing another series of rings echo in the silence that now filled a house without meaning. After yet another sequence of rings, she lifted the receiver and heard a metallic voice asking if she’d accept a call from the county jail. The woman dropped the receiver back on the cradle, vanquishing the ringing and so much more.

From her place on the tattered couch under the violet-colored slipcover, the woman majestically rose, not bothering with smoothing out her dress. Ignoring the leather recliner, the television, the oak table, and the now-silent telephone, she strode toward the front door and opened it. Cleansing vesper sunlight flooded into the entryway, and she paid no attention to the dust motes floating around her. Warm air hugged her face, offering an embrace that filled her with a youthful, renewed certainty.