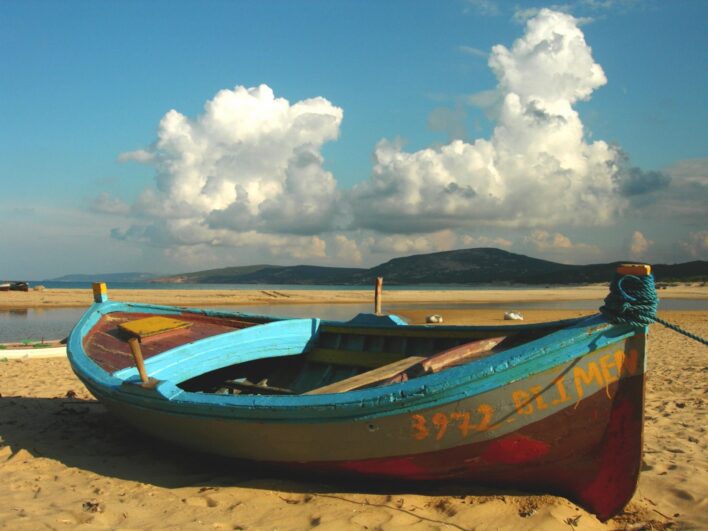 Southern Legitimacy Statement: No need for the Confederate flag, which has spread far beyond the South as a symbol of hatred and racism. Waffle House serves as the true boundary marker for the region. Cheesy eggs, grits, raisin toast, and bottomless mugs of coffee work for me. Always have, always will.

Wee Gent in a Dory

Johnny was just 15 when his favorite great-uncle, Micah, passed away. Micah had been the renaissance man of the family. He traveled extensively, studied art and philosophy, played jazz, and was always surrounded by a formidable posse of elegant ladies. In the 1970s, he would have been labeled the kind of man who reads Playboy. In 2010, the most interesting man alive.

Micah motioned Johnny over to the death bed, intent on offering one last bit of crucial life advice. Johnny leaned low to hear the raspy whisper “take care of the little man in the boat, and everything else will follow.”

Now, Johnny was a few shrimp shy of a Po’ Boy, and took this advice literally. He left home and traveled 300 miles to the nearest harbor town, in search of a little man in a boat. Johnny suddenly realized that there were little men in boats all over the place, but, alas, none seemed interested in him. Who knew it could be so hard to find the right little man in a boat?

Finally, in the eighth town, Johnny found a little man in a boat, with a sign “experienced hand needed. Apply within.” Johnny spoke to the man and admitted that he lacked experience, but would make up for it with enthusiasm. Clinton, the little man in the boat, was an emigrant from Croatia, and his English was not always perfect.

Johnny found it hard to understand some days what Clinton needed, what he wanted. At times, Johnny thought he had the answer on the tip of his tongue, and other times Johnny could not quite put his finger on it. The work varied, for some days it was all about precision, taking Clinton exactly where he wanted to go.

Other days, Johnny would be rowing until his wrists ached, and yet Clinton would not be satisfied. There were also days of Clinton lamenting the same old thing, and begging Johnny to do something different for Christ’s sake. There were calm days, and others when the rocking and bucking of the boat made it hard for Johnny to focus on the task at hand. And a few days each month, Clinton would send Johnny away, with some excuse about the tide or the flow.

Clinton was very particular in other ways. Even though Johnny had a mast and was proud of his sailing prowess, he was not allowed to seat the mast until the rowing was done for the day. Clinton told him that a true gentleman must have priorities. “Johnny, if you stick in the mast and have a great sail, you will fall asleep before the rowing is finished.” Johnny did not really understand, but whatever kept Clinton happy.

Johnny spent his life trying to please Clinton. It was at times highly aggravating, but when Johnny got it right, the response was effusive. It was those days of “yes, yes, yes” that kept Johnny returning to the little man in the boat.

On his death bed, Johnny motioned for his grand-niece Nymphetta to come to his side. He whispered to her “take care of the little man in the boat, and everything else will follow.” Nymphetta glanced at her girlfriend, smiled slyly, and responded “yes, Johnny, I think that will work for me.”