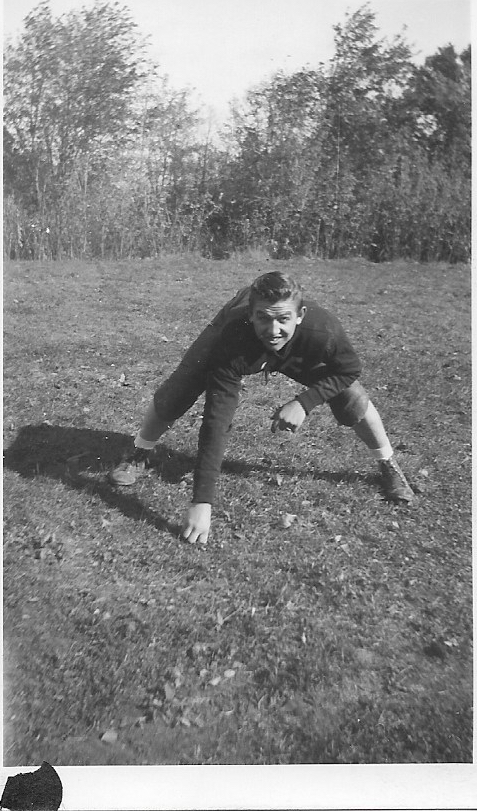 Southern Legitimacy Statement: Relative to this piece, I have run throughout the Southeast, for North Forsyth high school, the University of Virginia, and Wake Forest University. I raced Peachtree back when we thought 1,200 was an astounding number of competitors. I once placed second at the Tuckasegee River and Road Race, 10 miles of whitewater on Saturday, 10K of road race on Sunday. I have worn out a lot of running shoes in the South.

The Course of a Season

The race starts hot, across the practice field, down the grass ramp, and around the baseball field. Indeed, the runners have warmed up to be ready for this. College cross-country runners always go out too fast. The intensity of the first mile is the lingering heat in mid-September.

The short uphill to the mile mark is the only pavement on the course, and the jarring clacking of spikes shocks us like the first chilly dew of the autumn. In that dew — soaking quickly through the shoes each morning run and leaving toes chilled through the first class of the day — is the promise of change. The split at the mile mark, the overnight lows in the last week of September, and the reddening of the poison ivy and maples, tell us what one may expect.

The stretch through the barnyard speaks of the conflict between summer and autumn, sweater off and on throughout the day. Here are the small, A-frame houses of 20 fighting cocks. The runner here is often fighting with himself. Was that first mile too fast, meaning trouble later in the race? Or, was that unexpected split foretelling a great race to come?

Quick turn into Possum Hollow. The fast downhill through a tunnel of trees reminds us of that consistently cool, first week of October, when one likes to imagine that serious autumn is here to stay. This downhill is the season warning us it is time to cut and stack firewood.  Alas, Possum Hollow is a loop, and the return uphill suggests an unseasonably hot, second week of October. Summer’s dying gasp.

The dirt road takes the runner from Possum Hollow to the fields. Time seems to slow on the road. Although this race is unfolding, our runner is still headed out, the wrong direction. He longs to be finished with this middle, hold-my-pace section. This is the part of the autumn that promises the eventual splendor of a Monet, but seems to be moving too slowly to get there. Let’s get on with it. Yes, there are some trees going red and orange, but there are still too many green. There is a subtle trend toward cooler days, but there is the very real feeling that the show has yet to start in earnest.

The fields represent full labor. Here, the team has run intervals all season. They run hard when the first whistle blows, run easy when the second whistle sounds. Wherever they are when the 30-60 seconds of easy running ends, they have to get back up to speed. The runners hope they are not at the foot of Hangman’s Hill when the whistle blows.  The coach knows full effort will be required at this point in the race; the truth is revealed in the fields. This is when the leaf hues are peaking, and many leaves are already on the ground. This is the frost on the pumpkin, soon to become a jack-o-lantern. This is the time that the sun and soil suck the color, suppleness, and life from the hay fields, suddenly, seemingly overnight. The road kills of diverse species tell us that the animal kingdom has become manic in its preparation for winter. This is not the time for autumn or runner to be timid.

Dirt road again, this time heading in. The gravitational pull of the finish has added to the runner’s momentum. He is also pushed by either his success to this point (“Don’t blow this.  You’ve got a good race going.”) or his disappointment (“Do something, mother fucker.  There is still time to salvage this.”). This is where the runner relies on self-loathing to hold his speed. The season, too, is gaining momentum. The trees are naked, and there is nothing to stop the cold winds of fall. The sun can still manage to be warm for a moment, but there is always a cloud on its way to produce a shiver.

The fighting cocks. The internal argument for the runner is when to start his kick. The short stretch through the barnyard is not suited to sprinting, but the runner knows there will be no excuses once he turns the corner and enters the last mile. The seasonal struggle now is with winter, rather than summer. This is the second week in November when everybody is surprised by the morning cold, hoar frost on the goat paths, and the dark gray skies contrasting with the brightness of early-hung Christmas lights. Instead of an occasional chill, one relishes the occasional warm moment in the sun, out of the wind. Everybody now knows this will end painfully for both the harrier and the fall.

Hitting the pavement once more, the runner is offering everything he has to see this through. The end is near, and he must finish strongly. The clouds and shortened days mock the former warmth of the autumn sun, and winds are left with no work beyond wreaking havoc with the leaf piles. This is week of after Thanksgiving. The last Vs of south-bound geese call to the autumn “That’s okay.  Let it go.”  The coaches and team-mates yell to the runner “This is it.  All the way through.”

The race and the season are suddenly no more.  The runner does the strange, post-finish shuffle, hands-on-knees, trying to catch his breath.  No sign of the fall.  The athlete and the autumn have run their course.