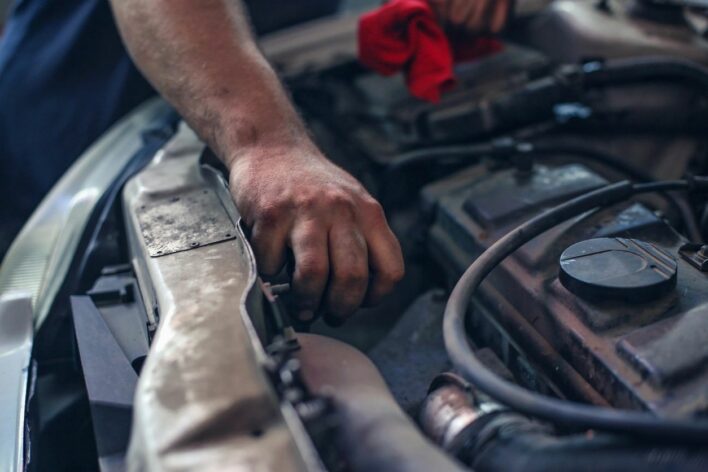 Southern Legitimacy Statement: E. G. Fate is the penname of an author, who currently resides in the state of South Carolina in the basement of their family’s house. While having no works published as of yet (aside from stories on fanfiction.net), E. G. Fate enjoys writing both comical as well as serious pieces of fiction in a wide range of settings and genres. The inspiration for ‘Car Thief’s Redemption’ began when the author’s father said, ‘no one’s going to stealing your car’ in response to E.G. feeling bad for forgetting to lock the beater car. This caused E.G. Fate to envision a person who was willing to steal an old vehicle and how one would respond to such a thief. (PS:I swear on goblet golden grits that I am a legitimate southern.)

The wire slipped again, frustrating Dean. He muttered quietly to himself about how it had looked so easy in the YouTube videos. Carefully, he looped the wire around the door’s lock to try pulling it up for the twenty-ish time. As he worked, a cool breeze whistled through the abandoned alleyway, carrying the smells of the small town’s sole diner, the only business bustling this Monday morning. With the scent of warm cinnamon twirls making his empty stomach growl, Dean found it easier to fully focus on unlocking the rusty car, now that he had a delicious reward in mind for his first successful theft.

Dean spun to his left in time to catch the key ring that had been thrown at him. He stared at three crusty, worn keys on a ring that seemed to be fashioned from a bunch of paper clips that had been twisted and mangled together. Then he looked at the old man who threw it. The man was a short, slender African of a slightly lighter complexion than Dean, with a white goatee, and wrinkles everywhere else. A dirty baseball cap topped his head, brown boots with frayed laces covered his feet, and in between was a jumpsuit that served as a janitor’s uniform for a local grocery store chain. The man held in his right hand a couple of plastic bags filled with crushed tin cans and empty beer bottles.

“Um, what?” Dean said holding out the keys.

“Those are my keys. The copper one’s for my car. Ya know, the one ya trying to steal,” he explained.

“Ya wire’s still in the window,” he smiled then snapped his fingers and said. “Now, chop, chop, get to it. That car isn’t going to steal itself.”

Dean cocked an eyebrow, “You want me to steal your car?”

“Hell yes! I’m ready for this thing to get gone. And if ya stealing cars, ya probably deserve this one,” the man smacked the rusty car’s already dented hood. “This car’s got no air-conditioning. Gotta love that, in this ninety degree summer we’re having. And it’s basically got terminal cancer in the engine. Seriously, my flip-phone is worth more than this thing. Also, that stink isn’t the stench of a skunk waving around a couple of dead, bloated, possum-fish-frog hybrids. It’s the trash in my trunk that I keep forgetting to take to the dump.”

Wrinkling his nose, Dean said, “I was wondering where that smell came from.”

“Well, now ya know. Now get to stealing my car,” he replied, smiling brightly and motioning for him to go ahead.

“I’m going pass on that,” Dean tossed the keys back to the old man.

Dean looked at him for a moment then retrieved his wire from the window before replying, “No offence, but I don’t think I’m down enough to be needing a job from a guy driving this rusty thing with a load of junk.”

“Ya do remember ya were going to steal that rust-bucket?” the old man asked.

Looking down at dusty gravel, Dean said, “Yeah. Why would you offer a job to a guy like me?”

“I figure if life’s got ya so low ya ready to steal, ya probably need a chance. And ya really must be down on ya luck if ya trying to steal a car with a rotting pot roast in the trunk,” the old man replied with a sympathetic smile. “I’ve had down days in life, too. But a fellow gave me a second chance, after he clocked me a good one for trying to mug him.”

“Yep, youngster,” the old man said tipping his head up and pointing at a circular scar on the left side of his forehead. “Still got the mark of a bottle cap that cut me when I hit the ground. So, what’d ya say? Want a job?”

“Yeah, it’s nothing fancy,” the old man unlocked his car. Flinging the bags into the backseat, he said, “I’m retiring from being the janitor of the Milton-Mart on Second Street. The replacement they had for me fell through. So, they need somebody real soon since I’ve been postponing retirement for the last thirty-nine years and won’t no more. Well? What’d ya say?”

“I say it sounds good,” Dean replied wondering if the janitor could really get him the job just like that.

The old man shook his hand, “Great! I’m Tom, by the way. Hop in. We’ll get over there before the manager leaves for lunch and have ya mopping floors this afternoon.”

“Ok,” Dean raced into the passenger’s seat as fast as he could get the rickety door to open and close. His eyes watered as the fumes of the junk in the trunk filled his nostrils.

Tom put the key in the ignition, twisted and twisted again. The third time he turned the key a cloud of smoke bellowed from under the hood, followed by a gasping noise. “She lives!” Tom rejoiced as the car lurched forward with a squeal and a jumpy rumble.

“Hurrah?” Dean said as he clutched the seat and prayed.

Every bump, rut, and rock the size of a pea made the car jump and jostle. Fortunately, the store was only four miles from the alley where the car had been parked. Still, the short roller-coaster ride gave Dean a green face. The moment it ended, he jumped out of the car as fast as the rickety door would let him.

Tom rushed into the store while Dean staggered forward as his stomach steadied. Once he made it through the doors, Dean saw Tom by the customer service desk talking to a tall, very obese, black man with a name-tag that read: Manager of Happiness.

Seeing him, Tom said, “That’s him. That’s the guy that tried to steal my car.”

Dean felt his stomach beginning to do turnovers again. He held out his now sweaty hand, smiling as his voice started to crack, “Hi?”

“Hello, and welcome to Milton-Mart, Home of Happiness!” The manager said in a soulful, cheery voice as he shook Dean’s hand firmly. “Great to have you joining us. I’m Rob Milton. Call me Rob. Step right into my office. I’ll have you fill out some forms and then give you a speedy orientation. Can you start tomorrow at eight in the morning?”

“Sure do, car thief. Now let’s get ya on the payroll. It’s eight dollars and a quarter per hour starting out,” Rob said while leading him into the office. He gave Dean a W-2 and some other forms and said he’d be right outside and would be happy to help him if needed.

After Dean had gotten through the documents, he walked out to hear Rob say, “Dude, you need to get rid of that car. It’s older than you are and stinking up my parking lot.”

“That stench is a rotten pot roast that will be taken to the dump soon. And as for that car, ya know I’m going to drive it ‘til she falls apart,” Tom replied.

Rob shook his head, “Come on man, you have the money. Go buy a new vehicle. Like a BMW or a Lamborghini.”

Slapping his leg, Tom asked with a snicker, “What would I do with a Lamborghini?”

“Pick up chicks,” Rob said, smirking as he wiggled his ears.

Rob chuckled, “well, you are single.”

“So are ya, but I guess a Lamborghini wouldn’t help ya get a hot date, ya Lard-Bucket,” Tom replied, poking Rob’s huge belly.

“I love you,” Rob embraced the old man.

Tom hugged him back, “I love ya, too, Lard-Bucket.”

Rob laughed bellowing each ha, ha loudly as he picked up the smaller man, twirled him around before setting him back on his feet, and patting his shoulders, “Stay retired this time and have fun, Pops.”

“Will do, Lard-Bucket, will do,” Tom said, waving as he exited the store, casually pocketing a candy-bar and snatching a soda as he left.

Dean looked at the manager as Tom got into his car, “Pops?”

Rob glanced at him, “Yep, he’s my daddy. Tom Milton founder of Milton-Mart. Still owns a majority of it. Couldn’t stand retirement after my siblings and I took over running the franchises. Came back here to work as a janitor. Finally convinced him to retire.”

Dean watched the trail of smoke that followed the rusty car, “More like crazy.”

Rob burst out laughing, “He’s crazy? You’re the one that tried to steal that rust-bucket—rotten pot roast and all.” Wiping tears from his eyes he said, “Now, let’s get you started doing something that’s more productive than stealing cars with rotten pot roasts. It’s all headed up for you from here on out!”