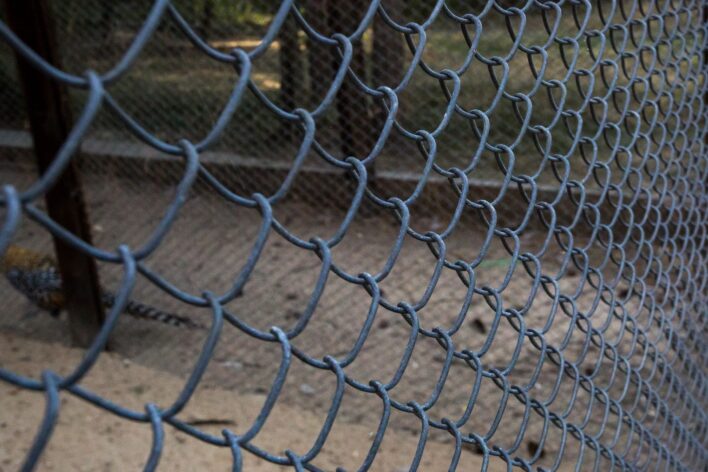 Southern Legitimacy Statement: I have always lived in the South, having been raised in North Carolina, and now living south of the north pole.

I had already drunk a couple of beers when Theresa pointed to a sign that read, Lion Enclosure, and suggested, “Let’s go take some pictures.”

We dropped our plastic cups in a trashcan, then threaded through the crowd of fellow Peace Corps volunteers gathered around beer kegs set in the shade. Out in the sun nearby, three-legged cauldrons full of bagobe bubbled over a wood fire. Eruptions in the thick white porridge reminded me of boiling mud on a lava field. Heat waves shimmered in the air above the caldrons. Next to them, chunks of grilled goat filled the air with its rich aroma.

Theresa and I abandoned the throngs, and followed the dirt road indicated by the sign. After a short trek in the blazing African sun, we reached the wildlife area. A chain-link fence enclosed several acres of red clay, rocks, and thorn bushes. A few acacia trees and clumps of tall grass obscured our view, although I could still make out at least a half-dozen lions. One stalked in our direction along the fence. I shoved my fingers through the metal mesh to stroke its back, but as it neared, I reconsidered and withdrew my hand. I glanced to see if Theresa had witnessed my cowardice.

She was intent on adjusting the focus of her camera, which she pressed against the fence, then backed away a few steps angling the lens. After a moment, she grabbed the chain link and shook it.

“I’m not going to get a good shot through this stuff. I need to go inside. Do you think they’re tame?”

I considered the big cat on the other side of the fence. He looked well-fed, and I knew humans weren’t a normal part of a lion’s diet. Would an animal attack a person for no reason? Theresa seemed to think it’d be okay for us to enter.

Since a large padlock and chain secured the gate, I told Theresa, “I guess we should ask the gamekeeper.” I had noticed a wizened Motswana man dressed in khaki shorts at the picnic site earlier. The epaulets on the shoulders of his shirt indicated he was in charge of the park. “I can’t imagine he’d let us inside if it’s dangerous.”

We retraced our steps to the picnic area, where Theresa immediately grabbed my arm and pointed to the old man we were seeking. He squatted in the sun on the far side of the hubbub, chatting with the Motswana woman roasting the goat. We pushed through the crowd to them.

“Dumela Rra, can we go in with the lions?” I said to the gamekeeper. I knew it was improper in Botswana to get to the point right away, but I was impatient.

The old man’s head swiveled as he glanced back and forth between Theresa and me. He grinned and uttered something in Setswana to the cook, who smirked then ducked her head.

Had he understood me?

“Is it okay? We just want to take pictures of the lions, ditau.” I used the Setswana word to clarify my meaning.

“The fence is ruining our shots,” Theresa added, as she held up her camera.

The gamekeeper looked back and forth between the two of us, then began to rant in words unintelligible to me. The cook froze, her eyes on the gamekeeper.

“The lions must not be tame,” I whispered to Theresa.

Why was the gamekeeper making such a big deal of saying no? As a young woman just out of college, I was accustomed to being told I couldn’t do things. I waited for the man to finish so I could leave politely.

The gamekeeper startled me with his English. He gestured for Theresa and me to follow, and strode away through the crowd.

“Maybe there’s a viewing platform,” I said to Theresa as we hurried after him.

But back at the fence, the gamekeeper lifted a ring of keys at his belt and unlocked the gate. Fear coursed through me as he ushered us inside. I had never expected to get my way.

The two of us huddled near the gate as Theresa snapped photos of the cats. The creatures seemed unperturbed by our presence. Emboldened, Theresa pointed to a lion next to a stand of high grass farther inside the enclosure.

“Go pose with that big one, Gretchen.”

I hesitated. Even sitting down, he looked formidable – maybe four hundred pounds with two-inch claws. Taut muscles rippled beneath his skin.

I slowly approached the motionless beast. People played with these big cats at the circus and on TV animal shows, and they survived. Surely, the gamekeeper wouldn’t have let us in, if it wasn’t safe. I glanced back at Theresa, and was reassured to see her following me, her camera ready. I might never get another chance to pose with a lion, I realized. I inched up to the enormous animal’s side, and wrinkled my nose at his acrid scent.

“Pat him on the head,” Theresa instructed. She lifted her camera and began adjusting the lens.

I froze. The muscles running up the back of my legs tensed and my breathing quickened. Taking a deep breath, I forced my hand to touch the lion’s head, his silky mane brushing the bare skin of my arm. I didn’t know what to do with my hand, but I’d had cats. I dragged my fingers through the long hair, and he rolled his head under my hand like one of my pets wanting to be scratched behind his ears. Slowly, my breathing returned to normal.

“Could you hurry up, Theresa?” I whispered without taking my eyes from the cat.

“I’m having trouble focusing. It’s scary putting the camera to my face with all these lions behind me. I’m not sure what they’re doing.”

Really? She thought her situation more stressful than mine?

The lion rubbed his velvet face against my arm, then with a sudden twist of his head, grabbed my forearm with his teeth. Fear shot through me, pricking my arms and legs, stopping my breath, but he merely held my forearm loosely in his jaws. I tried to remain calm although my legs trembled.

“Theresa, he has my arm in his mouth! What should I do?” I hoped Theresa was recording all this in well-focused photos.

“Well, pull it out,” Theresa said with obvious irritation.

I felt aggrieved by her tone, but carefully tried to extract my arm, tugging gently against the lion’s hold. He tightened his grip. Panic overwhelmed me, and I yanked my arm free, catching my flesh on a sharp canine. A stripe of blood ran down my arm as I turned to run. The lion roared his displeasure, the stink of his hot breath engulfing me. He lunged forward, catching my shorts in his teeth, and jerking me to a halt. For a split second, time stopped. An unwelcome vision of what might happen flitted across my mind. I realized my total helplessness.

Then miraculously, the seams of my shorts gave way. I stumbled forward, and Theresa yanked me away from the cat. We turned towards the gate, but the commotion had attracted the other lions, which began to crowd around us. Large, excited felines swarmed on all sides. Their rumbles filled the air like cars without mufflers. They charged at one another raising clouds of dust with their pounding steps, blocking our escape.

The gamekeeper rushed into the enclosure, yelling at the beasts and knocking them aside with his staff to create a path. I didn’t look back, but pushed through the gate followed by Theresa and the gamekeeper.

And there I was, with no pants. Luckily, I had a skirt in my backpack that I’d left on the Peace Corps bus.

The bus driver appeared startled when I pounded on his door half-dressed. But once clothed, I dismissed his reproving glances feeling exhilarated by the outcome of our adventure. I hoped Theresa’s pictures turned out well. Otherwise, no one would believe I had patted a lion on the head, or that a game keeper had allowed it. I was struck by that thought. Why had the game keeper allowed us in the enclosure?

It occurred to me the old Motswana man probably had had to bow to the wishes of white women most of his life. I had put the poor guy in a quandary, having to choose between refusing my request, or placing me in danger. I nodded to myself. That was probably it.

And so I thought for many years. Back then in 1986, I even felt a tinge of remorse over my of cultural insensitivity. But as I’ve aged, I’ve wondered, if maybe that old man just decided, that foolish young white woman needed to have her butt bitten.