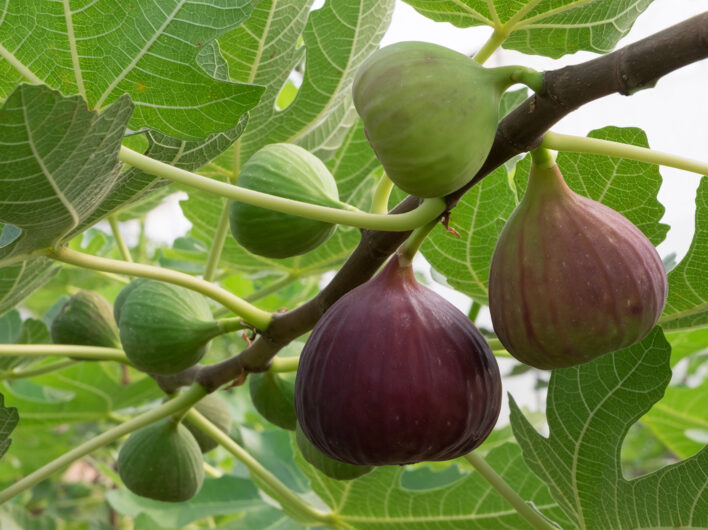 Reaching upwards nearly twelve feet, the two trees produced thousands of figs each year. The birds got their fill. Bees swarmed the over-ripe ones. Our Labrador—they’ll eat anything—helped himself to the lowest branches. So what do you do with bucketfuls from the middle branches? Country fig wine, of course.

With my sister’s kitchen table serving as a tasting bar, everybody had a comment: “I’ve had worse,” said my son. “The more you drink the better it tastes,” said my daughter-in-law. “Keep your day job,” said my wife, with a face. “Never touch the stuff,” said my sister.

Figs and fig trees have been part of my life from my earliest memories. When I was five, my family moved from Johnson City, Tennessee, to an old house two miles from midtown Charlotte. In addition to a city park across the street, I made another amazing discovery—a gnarled old fig tree in a corner of the backyard, its branches wrapping in and out of a broken-down fence so I could almost climb onto our neighbor’s garage roof.

In August, Dad swatted away bees and wasps, and collected the fruit. Mama mashed the figs, combined them with sugar, Sure-Jell, and lemon rinds and poured the scalding brew into pint jars. After topping the jars with Kerr lids, she finished the job with a bubbling hot water bath.

The summer after my seventh grade, we moved to a rancher in the suburbs, and my brother, sisters, and I left with memories of the city park and the fig tree. At our new house, Dad cleared a half-acre of backyard hickories, tilled up dirt for tomatoes and cucumbers, and ordered a couple of fig trees from the Burpee catalog. While the tomatoes came quickly, the figs took a while. But when they did arrive, out came the canning supplies. Fig jam on biscuits was an almost daily treat after morning paper routes.

I grew up and landed in North Wilkesboro. By that time, Dad’s fig trees were abundant producers, and, just to see if he could, he started rooting “babies” from the “mother” trees. As he did with the extra tomatoes in July, he gave away little fig trees to anyone who would take them. He gave me a starter for our backyard, but we moved before it yielded anything edible.

In High Point, I planted another of Dad’s baby fig trees, moved, and planted another at a house in Winston-Salem. Then, Mama and Dad moved to a retirement community in Wilmington. He started setting out fig trees, sometimes with the blessing of the administrator, anywhere there was a sheltered spot that didn’t already have an azalea bush. We moved to another house in Winston-Salem. This time I didn’t need one of Dad’s baby transplants. In the middle of the backyard were those two large well-established Celeste fig trees.

It’s years later now, and I have taken up Dad’s habit of rooting transplants from the older trees. I also give them to anyone who will take them, while trying not to be a pest. I advertise them on Facebook, bring them to plant swaps, even set them on the curb with a sign: “FREE TO A GOOD HOME.”

And there’s the wine.

Over a week or so each August, I pick and wash about twenty-four pounds, mash them with a pastry blender, and freeze them in Ziploc bags. In October, before my wife needs the space for a turkey, I thaw them in a plastic bucket and add wine-store yeast, sugar, and bottled water. After a week of enduring complaints about the distinctive aroma, I compost the figs and siphon the juice into gallon jugs. There’s another siphon session in a few weeks to eliminate the yuck at the bottom of the jugs, and, over a few months, several more wait-and-siphon cycles to achieve crystal clear goodness. After the addition of enough stevia sweetener to cover up any sins that might result in rude comments, the last siphoning is into sanitized recycled bottles.

With thirteen years of practice, the wine has improved. It’s still not Christmas-present quality and John Pearre Fig Wine—he would have approved of the product, if not the name—never won a prize at the fair. But my wife is willing to use it for cooking and sometimes has a glass with a weeknight dinner.

Last fall I came upon a new use for the backyard figs. Through the miracle of YouTube, I discovered a recipe for fig liqueur, made with brown sugar, vanilla, figs, and vodka. After four weeks in a jar, I decant it into fancy eight-ounce containers (or used Texas Pete bottles) for something that is Christmas-present quality. So far, the liqueur critics have been kinder than the wine critics.