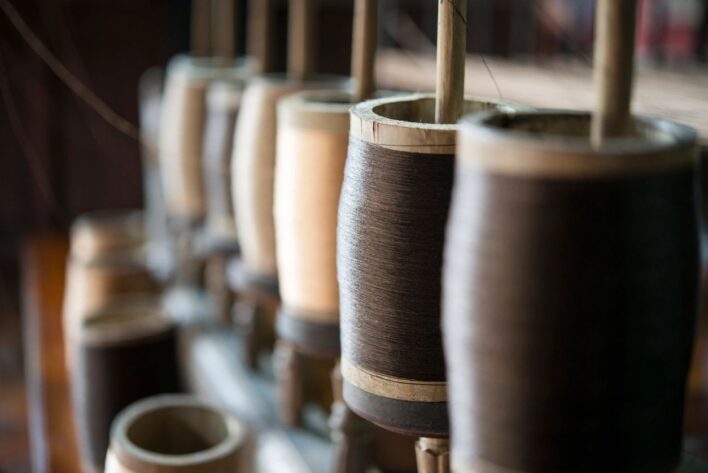 Southern Legitimacy Statement: Born in San Diego, raised in Western PA, during my fourteenth year of existence, my parents decided to relocate the family to South Carolina. How I hated the humidity, the drawling language, and politeness. Almost two decades have passed. Could’ve moved back up north on multiple occasions, but remained in the South Carolina warmth which I now call home. Perhaps Flannery had something to do with it. Maybe the food. Maybe the red clay, forever marking my shoes. I now reside in Greenville, after moving between Charleston and Columbia twice. Jesmyn Ward returned to the South, and from her, I’ve learned to never leave.

The kudzu. The tendrils of dead, brown, cling to four stories of brick and mortar wall, while late day sun — November light — further darkens corner, crevice, the hidden places. There are shadows longer than I could hope for. The smoke stack. 150 feet. The mill. 200,000 square feet. 1901. 37,774 spindles. 1,020 looms, the photo says.

Amidst the litter of soda can, of oil can, of mattress, cigarette pack and more trash, grass grows green. Tree grows firm. The turned leaves — the yellows the oranges and reds — mix with the red of brick, with the gray of cement, with the rain washed white, and the chipped blue paint of a rusted over metal door. Yes. There is color, there is life in this place. This home of house sparrow, of chipping sparrow, of the lark and white throat, this place was once a workplace. 1901. A hundred and six persons, some of them children. Little girls in ankle length dresses, their sleeves rolled up to elbow. Little boys wearing driving cap, suspender and overall. “The Spinning Department,” the photo says. Picture them. The little fingers twisting cotton fiber into yarn into textile into department store cloth.

“The American industry … preferred machines that could be operated by inexperienced female and child labor … and replaced it many times over with new generations of immigrants.”

I stare at the chain link rings. The iron gate fencing. The trespassing sign. The barbed wire. The gold lock. “Look,” she says.” And I see it. The once upon a time razor sharp tips, now flattened, pressed together. Harmless. Someone else has paved the way. Did they bleed? I picture the blood, the blood dripping down wrist, down arm.

The sounds of five o’ clock traffic. Engine. Horn. Tire squeal. I glance at my car, hidden behind a thick row of bush and tree. “But what if a cop shows up?” I say. She laughs at me. And when I reach the top of the fence — my knees balancing on the metal bar — before I jump. Stop. Memory. Twenty years ago. I’m nine. How it felt,  falling from an oak tree.

U.S. Department of the Interior

“Property is associated with events that have made a significant contribution to the broad patterns of our history … built in 1899-1901, is eligible for listing in the National Register of Historic Places under Criterion A in the Area of Significance for Industry at the local level of significance … the ending period of significance is 1948, when the mill was purchased by Woodside Mills of Greenville, SC.”

The man on the far left with the subtle smile, wearing a fedora, leaning on a black cane. What was his name? In 1936 Jesse Owens wins four gold medals in Berlin. Eugene Schueller invents sunscreen. The reelection of FDR. The Spanish Civil War. The Hoover Dam. Dr. Pavlov dies. Pope Francis is born. Twelve years later the Easley Mill becomes insignificant.

She sticks her head into the belly of the smoke stack. I read a sign of white, brown, black, and teal. “Accidents Hurt Stay Alert.” There’s a striped colored snake in an uncovered manhole. Tiny frogs everywhere. The steel water tower says IPA Southern. The machines are marked GE. Next to the trestle tracks, both of us are afraid to poke our heads under a slightly raised garage door. In what was the icehouse, we find a notebook filled with love notes. “Dear Chloe,” one reads, “I’m really looking forward to the weekend.” Twice, I’ll stare at what I believe is an old parking lot.

“An approximately three million gallon water retention reservoir on the site to the east of the building provided water to the water tower for the mill’s fire protection. Still intact, it currently appears predominantly as a dried-up mud flat because there has been insufficient rainfall in the area.”

“It is written, ‘The Lord can raise up these stones to give praise.’ So these tree boles, too, clay poured into forms; iron cut into nails, now rusted?”

And I’ll pray for the stones, the bricks, to sing, the nails and nuts and bolts too, for the chorus of voices to be heard, for ears to be opened, for the forgotten places, the vacant home, the condemned home, the left to rot car wash, out of style mini mall Can you count their memories? Would you try to? For the forgotten people, for the children who did not come home, for the parents who waited, the grandparents still hoping for a second chance, everyone hoping for a second chance.

“Kingside Properties, LLC has announced it will convert the former Easley Cotton Mill, located at 601 S. 5th Street, into 123 apartments. Developers asked county council to support the project by giving it a tax break.”

We walk back to my car, along a concrete path, the same path the moving trucks must have used. In my pocket is a rusted over hex nut. Something to keep. She tells me the leaves don’t change color in Florida. The sun’s just about gone. Setting behind our backs. Fiery and pink. An almost full moon hangs above us in the fading light.