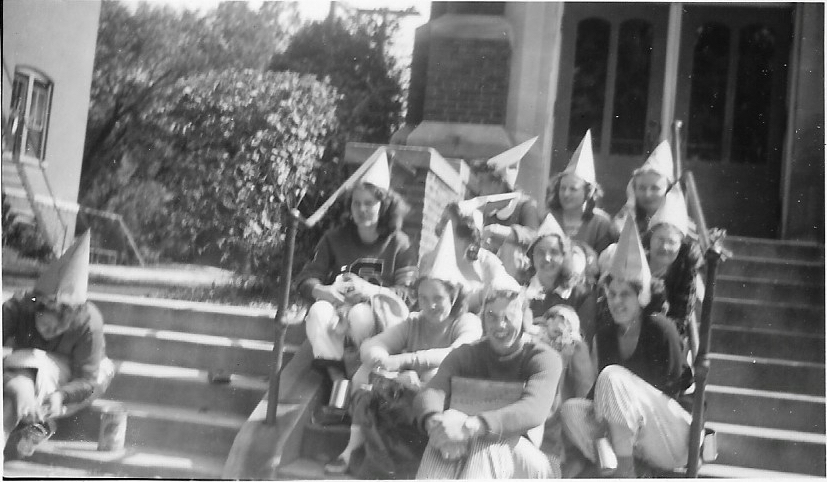 Southern Legitimacy Statement: For the last ten years I lived in Washington, D.C. or Northern Virginia as I worked toward my undergraduate and graduate degrees and taught at several colleges. Now, I live in Tallahassee, Florida, where I’m currently working toward my PhD in Fiction at Florida State.

I don’t know the food scene in Lexington, so the restaurant where I take Margaret on our first date is the result of online reviews and proximity to our apartment complex. The menu declares the food experience “relaxed fine dining,” which in the South means grits, fried oysters, and pecan-crusted everything served in a historic building and priced accordingly.

“Would you like something to drink?” our waitress asks us. She seems nervous; her pen shakes against her notepad. “A bottle of wine, perhaps?”

Wine. Beer. Scotch on the rocks. Hell, I’ll take a shot of Jose Cuervo and the accompanying judgmental looks from the grandparents around us.

I’m glad she doesn’t ask me whether it’s okay to drink around me, though I’d prefer she didn’t. I’m glad she’s the kind of girl who, after the waitress brings her a glass, will sip beer from the bottle but remember to move her napkin from the plate to her lap.

I pretend to look at the menu as I sneak a longer glance. From my current view Margaret’s dress reminds me of what I call the D.C. D.C., or D.C. Dress Code—black dress that checks the boxes of tight and low but can easily be covered with a work-appropriate sweater for a quick 5:00 p.m. change—but the crystal dangling right above her cleavage and the black combat boots hidden by the table cloth put her style somewhere around “biker funeral.” I wonder what she thinks of my button-down and blazer—wonder whether she’s even looked at me at all. Her brown eyes found the menu as soon as we sat down and they’re still there, even as she uses a blind right hand to feel for her sweating bottle and swing it around the imitation leather menu cover.

She finally makes eye contact. “No one calls me Margaret.”

“That’s work,” she says, as though the distinction should be obvious. “Outside the dealership, everyone calls me Em.”

“Oh.” I hate when people use letters as names. Then again, according to semiotics, names are just signs composed of the signifier and signified—the Em and the girl slowly drumming her fingers on the menu. “Then are you okay, Em?”

“Fine,” she says, but the drumming has increased in speed and intensity. I can’t help looking over her shoulder at the full bar, and I’m surprised to find a man there making eye contact with me in the mirror.

“Are you sure? Because—”

“Just ask me about it already,” she says. Her voice is loud, and the older couple across from us wearing matching sweaters looks up from their shared pecan pie to stare. Our waitress, who was a few steps away from our table, diverts her path and heads back to the kitchen.

“Ask you about what?” I whisper.

“Oh come on.” She doesn’t even try to match my whisper; in fact, she’s almost shouting now. “Frank’s a nice guy and all, but there’s no way he’d let you date a mur…you know…a person like me…without at least warning you first.”

I really wish I had a drink right now.

“So you killed your boyfriend?” I say almost as loudly. She obviously wants to make a scene—now that I think about it, her mere presence at this restaurant has probably already done that and I’ve been too distracted to notice—so if that’s what she wants, I’ll help her. “From what Uncle Frank said, he had it coming. I don’t see how shooting that abusive asshole is a reason to ruin a perfectly good date, and frankly, I’m too distracted by how nice you look in that dress to change my mind. If you’re uncomfortable here, we can leave, but I’d really prefer to spend the night getting to know you and trying fried catfish for the first time.”

Like an actress waiting for her cue, our waitress reappears. “Fried catfish,” she repeats as she writes it down. Her voice is the only noise in the whole restaurant. “And for you, miss?”

Em is glaring at me. She doesn’t answer the waitress, and the waitress doesn’t ask again. The three of us are like mannequins in a Macy’s window, while the other diners and servers stare at us through the lit glass and murmur. German sociologist Max Weber said that social interactions are made up of actions and the meanings—which Weber called orientations—that the actor attaches to those actions to form his or her relationship with others, and I think of him now as I wait for Em to move. Finally, she closes her menu and hands it to the waitress.

“I’ll have the New York strip,” she says.

“Great choice.” The waitress tucks our menus under her arm and writes this down. “I’ll get those orders in right away.

Once the restaurant returns to its pre-disagreement din, I reach for Em’s hand—the one not holding the beer bottle—and squeeze it.

“So go ahead and tell me about yourself.” It sounds like a challenge, but Em laces her fingers through mine as she says it.

“Well.” I take a deep breath. “I’m not sure what Uncle Frank’s told you about me, but I’m quite a catch. I have an utterly useless PhD, I recently quit an internship that will easily replace me with a highly driven undergrad, my parents sent me here to stop me from drinking my life away, and I have absolutely no plans past surviving three months at the auto dealership.”

“You really are going to make a terrible salesman.” But Em is smiling, and I am too.

“How about you?” I ask. “What does your future look like?”

Instead, I take her napkin and ask whether she wants to see a cool trick. With a few folds, the blank canvas of Em’s napkin becomes a boat.