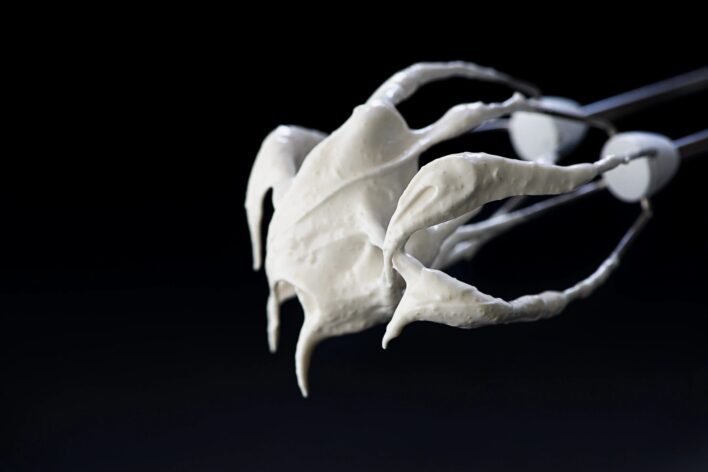 Southern Legitimacy Statement: Dear editors at The Dead Mule, Have I ever told you how much I love the South? Probably not, because we’ve never met. I live all the way up here in Alberta, Canada and have so much appreciation for the Southern United States having a food background and a taste for home-cooking.

Measure Your B.S. with a Spoon

A sweet-smelling upsurge of air is released from the oven as I open the door to retrieve my cookies. A whoosh of heat momentarily pulls back the two strands of strategically placed whisps from either side of my otherwise ponytailed head. The oven mitts are Christmas themed, red and forest green with embossed pictures of Santa and his reindeer.

I have made the perfect cookie. Yes, sure, some of them are a little charred around the edges and the ones located in the middle of the pan look as though they haven’t been baked at all, but by my eleven-year-old brain’s approximation they are perfect.

“Don’t burn yourself, kiddo,” Mom shouts from the front room where she is stoking our wood-burning oven. The oven, not the thing I’m baking in but the wood-burning one, is square and black and heavy, with a connected tin pipe that pokes out of the top of our double-wide trailer’s roof.

I want to know what it would be like to eat off of this olden days stove. I might set a pot of Campbell’s Chicken Noodle soup atop its surface and allow the raw heat that radiates outwards to do its job. Dad says this stove is not for cooking. It’s for warmth. I still think it would be a neat experiment in colonist life.

The icing for the cookies is ready, placed on the counter strategically in little Tupperware bowls. The colors I’ve chosen are sky blue, pink and white. White because we did not have any other food coloring other than blue and pink. I suppose I could have mixed the existing colors together to make some kind of purple, but at the time, this did not occur to me. I was too busy trying to figure out how to make the icing.

My school friends, the ones who live in town and have access to grocery stores, would not have made the icing for their cookies. They would have had their mothers drive them to the store and buy those little tubes of premade glaze, the ones that have four in a pack and come in primary colors.

We are country folk. Country folk who sometimes cannot afford the gas to get into town when we need packaged icing. No, scratch that, even if we did have the ability to come and go without consequence, Mom would have put the kibosh on purchasing anything that we could simply make with a little icing sugar, milk and corn syrup—all staples in our rural home.

There is no icing bag to artfully decorate these half-burnt half-doughy cookies. The idea of using a ziplock as a makeshift decorating tool does not occur to me because we do not have ziplock bags. Or You-Tube to reveal such baking tips and tricks. The year is 1997 and these things have not been invented yet, at least not in my corner of rural life they haven’t.

So instead, I grab a trusty butter knife and begin to slather on the pink and blue and white icing. The cookies are still quite hot, resulting in the frosting melting off the sides in a gooey mess. This is okay, I think to myself, I will just cover them with sprinkles. Sprinkles fix all.

After roughly an hour of icing and sprinkling, I am finished. The kitchen is sullied with hardening dishcloths, bowls of half-used batter, and several splatters of food coloring haphazardly squirted in random places like the fridge door handle and the ceiling fan.

None of that matters now, though. I place my creations on a white plate with blue floral trim, then proudly present my work to Mother and Father.

“What the hell is this?” Dad says, spitting the cookie back into his hand. “Did you dump a cup of salt into this thing?”

“Lindsay, didn’t you follow a recipe?” Mom asks, forcing down the small bite she had taken.

I did follow a recipe, sort of. Mom stomps into the kitchen. She is not stomping because she is mad, this is just her standard tread. The orange baking soda box is tipped on its side. Mom locates it immediately and takes a deep breath as she notes the state of her kitchen. It is like she is literally trying to press down the instant rage she feels upon entering this room. Her eye twitches, but so discreetly, I don’t think even she notices.

“Lindsay, this baking soda was half full when you started.” Her tone, although calm, is filled with self-regulated fury. The unfairness about this time in our lives was that we couldn’t afford to waste any amount of baking soda, flour, eggs, milk, icing sugar, or corn syrup on a squandered batch of inedible cookies.

I had not measured the baking soda but instead trusted my hand-eye coordination to such an extent that I assumed I could eyeball the half tablespoon that was to be mixed into the flour. Alas, the box tipped at such an angle that nearly its entire contents fell in. I could try to scoop some out, my little brain thought to itself, but nah, I’m sure nobody will notice. Regrettably, I was unaware of the pandemonium in which too much baking soda in a batch of sugar cookies can cause.

23 years later, I am baking and thinking of these events while smiling. I am adding eggs, one by one to the choux pastry, piping dollops of half solidified paste onto a baking sheet. Now, fortunate enough to own several piping bags with almost any decorative tip one could imagine, I feel #blessed in my life as a baker. The not yet baked cream puff shells go into a hot oven at 450 degrees and will come out as perfectly sculpted puffs. Of this, I am certain. An upside-down banana bundt cake rests upon a raised glass platter, the brown sugar glaze pooling in an amber ring around its edges.

After the Great Cookie Incident of ‘97, as it would be called for years afterward, I didn’t take kindly to the confectionary world. I’d leave that job to Mom or the stores in which I never visited as a child.

It wasn’t until I met a man who would become my husband and a Red Seal Chef that I decided to try my hand at this art form again. In later years of our marriage, we would go on to open a bakery business where we crafted and sold loaves of artisan bread, eclairs, French macarons and many more sweet treats.

To this day, Mom and Dad marvel at the baking I bring to family dinners or brag about all over my social media pages. I think they still picture me as an eleven-year-old who doesn’t understand the bitter-tasting ramifications of a half cup of baking soda.

What I do not tell the people that compliment me on my baking is that I am still partial to measuring with handfuls and dumps rather than cups and precise weight. What freedom it is to be unencumbered by a recipe. What joy there is in knowing you’ve crafted something that is wholly your own.

When I allow myself the guilty pleasure of baking a batch of cupcakes or cookies without measuring a single thing, I am whisked back to my eleven-year-old self, the feeling of newness and that sweet warmth of an oven’s heat pulling back my adolescent hair. I would take that feeling over the perfect macaron any day.

Whether it be salty cookies or a perfectly sculpted wedding cake, our edible creations are therapy. They are nourishment for not only our insides but our in-insides. Bake with handfuls instead of cups if that is what heals you. Use bold flavors and create unapologetically. Put yourself into the food, and it will come out beautiful.

Except if you dump the baking soda. Always measure your baking soda with a spoon.