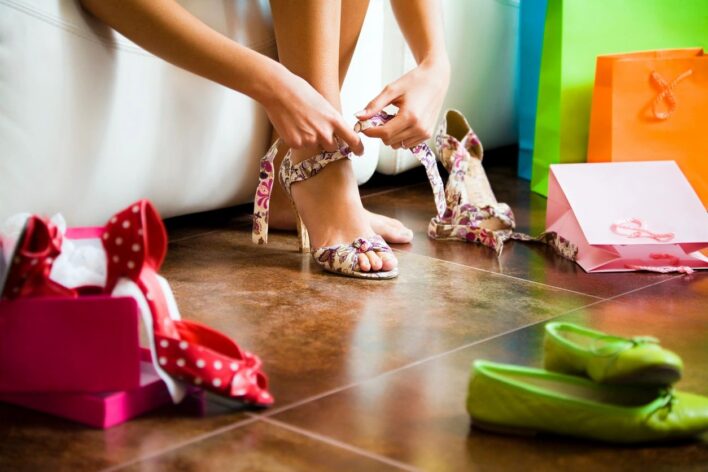 Southern Legitimacy Statement: After studying at Southern Illinois University, I left to follow all roads South and South East from Alabama to Texas, and finally, Tucson. I hang with people who believe in biscuits and gravy the way others believe in the purity of worship. Crank up the Allman Brothers, please.

A Hole in One

I’d like to be able to laugh at my insecurities when shopping in exclusive stores when I was 20 years old, but unfortunately, they haunt me still. I blame a sales lady at Saks Fifth Avenue for all the work it took me to become confident enough to go into a swanky shoe store to buy my mother’s birthday present.  And, I’m not talking about developing some inner strength. I’m talking about developing my outer appearance. No one at Joseph’s Shoe Boutique was going to turn me away or treat me as though I didn’t belong there like that sales lady did.

“I doubt you have enough money to buy anything in our store, dearie.” That she was correct didn’t make it right.

I had seen the pair of stylish black and white patent leather shoes a few days earlier but I didn’t have my game face on to go into Joseph’s then. You have to understand that this was the premier women’s shoe store in the city, so I was forced to try to look the part of a woman who was familiar with shopping in high-end stores.  I pulled out my war chest for this battle—blue eye shadow, red lipstick and false eyelashes.  It’s a model-thin line between looking sophisticated or sophomoric and those eyelashes would perfect that balancing act.

My girlfriend’s brother agreed to meet me downtown to accompany me inside that hallowed store. He was tall, dark and formidable as only an ex-Marine can be. He was my support soldier and proof that I belonged in such a prestigious store.  As we walked into the downtown store, I started to breathe so deeply that I sounded as though I was gasping for air.  The shoe store, decorated with Oriental carpets, rare antiques, and crystal chandeliers, totally disarmed me. I was completely intimidated by the glare of such elegance and luxury.

A young salesman, who looked to be my age, approached us after stopping momentarily to welcome another woman enter the store. She, who looked like she belonged, waved him off with a frown. He glanced at me, and then proceeded to engage another coworker in small talk. I overheard a bit of the weather report and that he’d have to work that weekend, even though it wasn’t his turn.

“Still,” he added, “I’ll get overtime—not that it’s all that much.”  Then with a renewed interest in his job, he ambled over to me and asked what I wanted. He appeared aloof as though he was sure I was wasting his time. My friend had to nudge my arm to loosen the speech in me.

As I held the shoe in hand, my voice quivered slightly, “I’d like to see this in a size five, please.”  He frowned—did he think I couldn’t afford them?  He took the shoe and without a word, turned and walked away. It was then my friend pointed down at the salesman’s ankle. There, displayed as a gift from the gods, was a large hole in his brown sock that was sinking lower and lower in his shoe as he walked away, exposing his Achilles heel, in more ways than one.

I immediately relaxed.  He and I were not so different. I’m sure he had hopes and dreams beyond squeezing women’s feet into overpriced hammer-toe makers. My hope was that I’d eventually be more confident about shopping at élite stores. After all, we all have an Achilles heel but you can’t always find a Marine to accompany you when you need to go shopping.