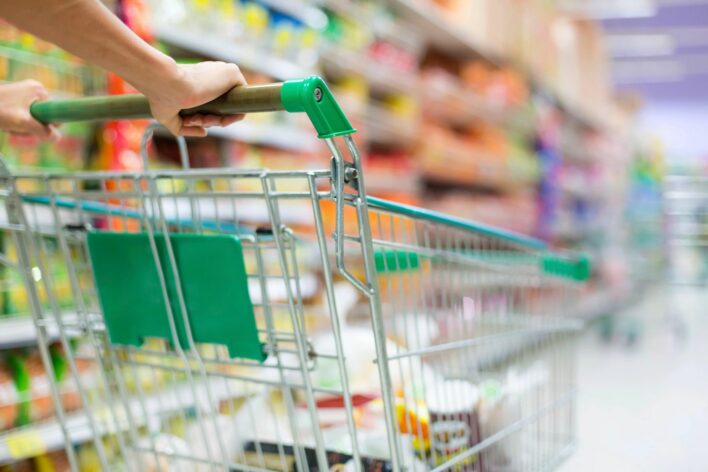 Southern Legitimacy Statement: Born in Tennessee, raised in Kentucky, live in North Carolina. I’ve bumped my head in tens of caves where Daniel Boone was rumored to have slept, and each time I’ve believed it.

The summer sun was gone behind the trees on the horizon, and the world was getting dark, but not the Food World. The lights in the parking lot pulled cars like moths out of the night from miles away. The cars expelled shoppers who moved across the warm asphalt, beneath the monumental red letters glowing on the face of the building and through the doors that slid open as they neared and closed silently behind them as they passed inside.

Inside, the store was lit up like the neurons of a torture victim’s brain. Light hummed from a thousand glass tubes installed in the ceiling and sang from the shiny tile floor. It trilled from the polished chrome hardware of the shopping carts fizzing down the aisles. The Food World was swollen with light, with sound, with the chemical-citrus mephitis of floor cleaner and with the mountains of product and armies of customers and employees fighting to reduce and maintain them and with the anxiety of shareholders far, far away on the other side of a screen. The walls of the building bent outward, and there was no room for the peace of the evening to enter.

At the crux of it all, a cashier stood on a rubber mat beside a register. Other cashiers stood beside other registers in lanes parallel to his, but he didn’t see them. He no longer saw the magazines or soft drinks at the mouth of his lane, or the candy bars aspiring in the rack across from him—though he seemed to look in their direction. He had to look somewhere. But he didn’t see anything or think anything or feel much—just the remote sense of being tied to the hand of a clock that might  tick him around to the end of his shift or might have died. That and some pain in his arches.

He didn’t see the customer until she was standing in front of him faking a cough into her hand. Her groceries were already huddled at the business end of his conveyor belt.

He looked from them to her. She smiled hello, and he noted her eyes: Brown. And warm. She was shorter than him, but not short, and older than him, but not by too much. She had clear, clean skin and comfortable clothes, and her hair—brown as well—was damp, like she’d taken a shower before shopping—perhaps at the gym on the way home from work. He wondered what she did.

“Find everything okay?” he asked.

He nodded and rang up her groceries: yogurt, almonds, orange juice, and two unripe avocados. The orange juice and the yogurt he simply swiped across the laser, but the avocados and the almonds required that codes be entered manually, and the almonds, furthermore, had to be weighed. He did it quickly and easily, without looking anything up, picturing the items being dropped into a blender and turned into a smoothie, delicately flavored and nourishing. Breakfast like a cool breeze. Her kitchen would be well-used—clean, but not pristine—and not too modern. He pictured her gas stove and felt something move in his gut like the gentle shift of fresh, white snow on a sloped roof.

She nodded and passed him a credit card. It had a picture of a tiger printed on it and was, he understood, good somehow for animals. He took it and shucked it through the reader with a practiced motion, hardly even looking. Their fingertips touched when he handed it back. She smelled like soap, and he felt a tickle of incipient sweat beneath his baggy, polyester polo shirt.

While she put away her card and pressed the necessary buttons on the keypad facing her, he stepped to his left, off the rubber mat, and began bagging her groceries. With care and some slight effort, he fit them into a single bag, for her convenience, then double-bagged it, for strength.

Behind him, the printer whined and pushed out a curling slip of paper.

“Receipt in the bag?” he said.

That would be fine.

So he put the receipt in the bag, between the almonds and the avocados, where the orange juice wouldn’t wet it with condensation, and he passed the bag across the counter. Their fingers grazed again when she took it, then separated.

They stood across from one another. The counter stood between them. But their feet were on the same hard floor—he felt a tremor, and perhaps it was just Justin, the sixteen-year-old cart attendant, wheeling in a load of strays from the parking lot, but he knew she felt it too.

Her lips parted, and the tip of her tongue pushed forward from behind elegant teeth.

When she was gone and the automatic doors had closed behind her, he reached across the counter, plucked her thank you from out of the air where it still hung, and slid it into his front pocket. It was warm. No one had seen him.

Later at home, alone in his room, he would pull it out and explore it, hold it in his hands, rub it against his bare chest and stomach. He would fall asleep with it singing softly into his ear, and in the morning he would place it in the box beneath his bed. Until then, he would enjoy the weight of it hanging at his hip, something precious and hidden and his, secret from the staff and customers of the Food World and safe from the corrosive glare of the flurorescent lights overhead.