“I’d never had a broken heart and didn’t understand the difference between what you feel and what you have to do.” 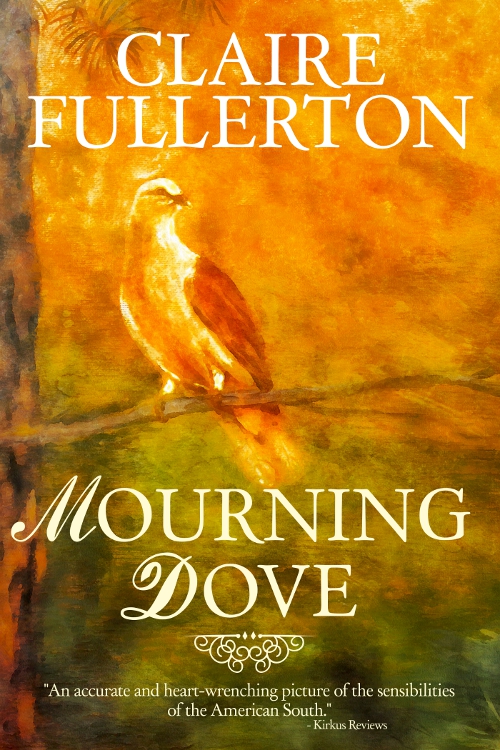 The novel, Mourning Dove embraces an enduring story of the 1970s American South and holds onto it with a such precision — dialogs so rare and unique that you want to savor every moment of it.  This novel is exquisitely written down to the last detail.

This is a glorious book. Just glorious. Every sentence tells a complete story. In Mourning Dove,  you’ll find no wasted words. Tightly written, each descriptive phrase renders an image so completely — it causes the reader to hunger for the next sentence.

Seriously. It’s that good. Claire Fullerton manages to set the stage in the recognizable South (if you’re from here, you get it; if you’re not from here, you’ll still get it) and never lets you forget that Place is a character too.

The story begins in Minnesota and moves to Memphis, TN as Posey leaves her husband and returns to her birthplace. It is the tale of two siblings, a brother and sister, born 18 months apart — Finley, the older brother, with looks and charm, “inexplicably eye-catching”, and Millie, the narrator, the younger sister, who adored him.

After one comes of age, how does one tell their story? How is the past reconciled with the present? In complicated relationships, when is the moment of truth? Fullerton captures the personalities and showers the reader with delicious details.

There’s Finley: He wore the entire English language on the surface of his skin and could command it with one arm tied behind his back. Finley’s charismatic personality and charm see him into adulthood and take him down pathways Millie cannot easily reconcile.

The father: Even as an adult, Millie’s admiration of their father remains childlike. He is revered despite his flaws, she is willing to accept any explanation for his shortcomings. She says, “In my father’s den there were many mansions,” “…nothing worthwhile ever happened until Dad walked into the room.”

Millie: She wants to see everyone at their very best all the time. Her relationships are complicated and satisfying. The Colonel, her mother, her father and Finley — all aspects of their personalities become clear as Millie herself begins her journey to self-enlightenment as she tells the story. She realizes her father’s frailties as she develops her own story “… the air was fraught with unassigned shame” as she recognizes his descent into unremitting alcoholism while she relates events. As children we see adults so differently than we do as we grow and review their actions.

And it’s not just humans who are the “characters” in this book. The South, the city of Memphis, alcoholism, and the house itself, become integral pieces of the story, almost human in their importance, as if they each have attitudes and personalities. As often is the case in a great novel about the American South, the story of place becomes the story itself.

Although I wasn’t aware of it at the time, my mother’s plan was pin-point
specific. She simply picked up in Memphis where she’d left off before marrying
my father, as if she’d changed her mind over which cocktail dress to wear to a
party. The dress would look good on her, she’d make sure of it, and it’d show
off her curves and float lightly above her delicate knees with airborne fragility
from every step of her enviable narrow, size-seven feet.

This is a beautifully written novel. It deserves recognition and praise. The novel travels through childhood into adulthood with grace, poise, and elegance — a wonderful summer read.

Don’t take my word for it, read what others are saying about this novel!

“Set against the backdrop of a complicated 1970s South – one both forward-looking and still in love with the past – and seen through the eyes of a Minnesota girl struggling to flourish in Memphis society, ‘Mourning Dove’ is the story of two unforgettable siblings with a bond so strong even death can’t break it. Claire Fullerton has given us a wise, relatable narrator in Millie. Like a trusted friend, she guides us through the confounding tale of her dazzling brother Finley, their beguiling mother Posey, and a town where shiny surfaces often belie reality. Like those surfaces, Fullerton’s prose sparkles even as she leads us into dark places, posing profound questions without any easy answers.”
Margaret Evans
Editor, Lowcountry Weekly
Former Assistant Editor of Pat Conroy

“Like sitting in a parlor and catching up on the trials and tragedies of the reader’s own extended Southern family.”
–    Kirkus Review

“Fullerton’s novel will transcend generations for this reason. It speaks to readers across different barriers in the same way that her novel oscillates. North to South. Baby Boomer, Gen X, Millennial. The hard-learned lessons she captures know no boundaries and have no mercies. Mourning Dove is a novel we not only read, but listen to as we would a teacher filled hard won wisdom.” — Review in The New Southern Fugitives ( Emery Duffy.)