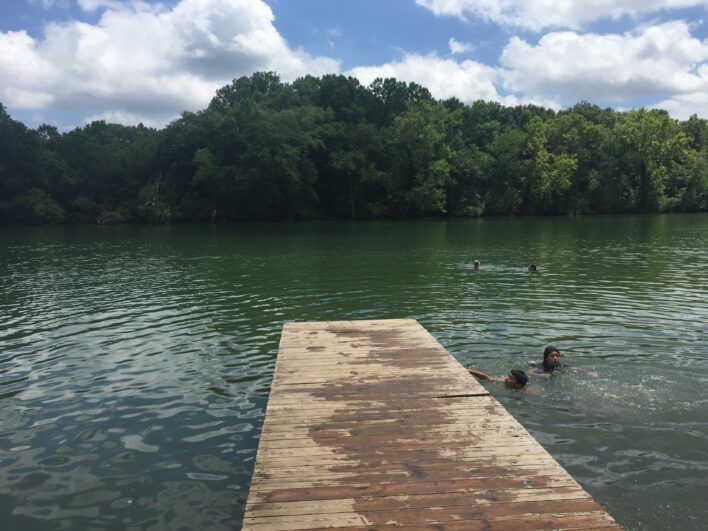 Southern Legitimacy Statement: I grew up doing the same stupid things that all redneck Alabama kids do. When I got old enough, I jumped out of state for college and quickly learned that this big old world isn’t all cotton fields and red clay. Being Southern isn’t just an address, it’s a state of mind that blurs with time like the edges of an old tattoo. I’m Southern alright, but I don’t regret that I got on down the road when I did.

Lord, We are Grateful…

Kathleen’s coughing fit took hold in mid-laugh when old Uncle Joe took a pratfall on the dock. On exiting daddy’s bass boat, he tripped over a scattering of empty beer cans and landed belly-up dockside even before Billy had switched off the outboard motor. Uncle Joe despised anybody trying to help him with anything, so when younger brother Billy wrapped him up in a bearhug and tried to horse him to his feet, he swore and shoved Billy face first back into the boat.

Still coughing, Kathleen ducked indoors from the porch and let the screen door bang shut. With respect for the great-uncle’s seventy-plus years, I stifled my own laughter and trotted down the dock path to check him for injuries. Uncle Joe was up on one knee and breathing hard when I reached the dock. In the boat, Billy leaned overboard and cupped cold lake water over his face trying to staunch a nosebleed.

“Are you okay Uncle Joe?” I asked.

With obvious reluctance, he reached an arm out and I tugged him upright.

“Hell no, I’m not okay,” he said. “I haven’t had anything to eat since sunup except for trail mix and beer. Your idiot brother decided that a can of trail mix split between the two of us would last all day. God only knows what my glucose numbers are right now.”

Kathleen reappeared on the front porch right on cue and yelled for us.

“Momma says for y’all come to dinner right now before the turkey gets dried out.”

She retreated indoors and the screen door banged shut again. Uncle Joe started for the house while I checked Billy. The nosebleed had stopped but his camo sweatshirt was dripping wet and bloodstained as well. Knowing he’d catch hell from momma if he showed up for dinner looking like he’d been in a brawl, he peeled the sweatshirt off and stuffed it in a trash bag along with all the empty beer cans gathered up from the boat. Billy knotted the plastic bag and we hurried back up the path. On crossing the driveway, he flipped the trash bag into his pickup truck and retrieved a red plaid shirt-jacket from beneath the driver’s seat. He sniffed the garment and slipped into it, buttoning it on as we entered the house.

Momma’s holiday dinners over the years were so alike that they felt scripted. A leaf got added to the dining room table to accommodate me and my two grown siblings, momma and daddy, Great-Uncle Joe, and Grandma before she passed. Billy, Kathleen and I were placed elbow-to-elbow on the offspring side of the table, while Uncle Joe sat opposite. Everybody knew that shifting a sibling to Grandma’s empty chair alongside Uncle Joe would ease the crowding, but considering momma’s reputation for holiday testiness, nobody cared to push that issue.

Thanksgiving dinner nearly overflowed the table, the glorious focus of which was a roasted turkey. Daddy said grace punctuated by a communal amen. I poured wine while steaming bowls of potatoes and veggies circulated. The gravy grew skin as claims on favorite turkey parts were negotiated. Daddy and Billy grabbed the drumsticks. Momma and Kathleen each took a wing. Nudging the turkey neck aside, I speared slices of what was left on the platter and Uncle Joe followed suit.

Small talk droned on through dinner, shifting seamlessly from fish tales to neighborhood gossip and then on to recent passings, a subject that reminded us of the hole in our family fabric that Grandma left behind. Billy raised his wine glass towards Grandma’s empty chair.

Glasses were tipped followed by sentimental murmurs from around the table. Kathleen drained her glass and dabbed her eyes with a napkin. I topped off her glass, and she didn’t refuse the refill but was quick to mention that an empty glass wasn’t what saddened her. She pointed to the unclaimed turkey neck.

“Grandma always got the neck,” she said. “She loved those boney things.”

Uncle Joe arched an eyebrow and pushed his wine glass toward me for another splash. He took a swallow and said, “When your Grandma and me were kids, she wouldn’t eat anything but wings. I don’t think she even knew that necks were edible until you greedy little buzzards came along.”

Well, that was that. Kathleen blinked twice and began sobbing. She rose in a huff and split for the front porch with her wine. Momma snarled and called Uncle Joe an asshole on her way out the door with her wine to join Kathleen. On the bright side, with momma and Kathleen busy drinking on the front porch it was seconds on dessert all around for the rest of us.

That done, we got up from the table and moved to the kitchen. Daddy and Uncle Joe went out the back door and headed for the boat dock. Billy and I bused dirty tableware and made a token cleanup effort. He wiped dinner scraps into the waste receptacle, disappearing soon after to take out the trash. I started the dishwasher and joined momma and Kathleen.

Still teary, Kathleen was shouldered up to momma on the porch swing. I fetched them a fresh bottle of wine and gently suggested that Uncle Joe was probably just teasing about Grandma. Kathleen instantly resumed sobbing and momma gave me a frosty glare. Looking to the dock, I saw daddy and Billy moving around on the boat while Uncle Joe watched. I thanked momma for dinner and said goodbye with a promise to call her real soon, then I left for the dock and more goodbyes.

On approaching the waterfront, I reflected on the waning holiday. Except for Billy’s bloody nose, there hadn’t been any casualties worth mention. Thank you, Lord, for the family I have, and especially for old Uncle Joe. I’m praying he hangs on for a few more years. Family gatherings just won’t be the same when he’s gone.