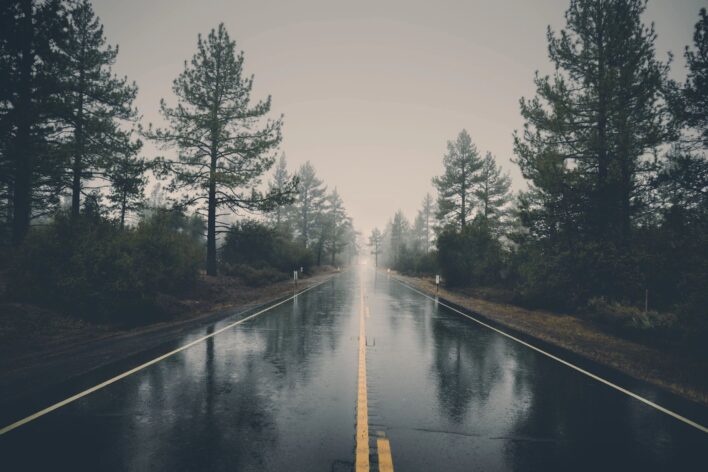 Southern Legitimacy Statement: I spent half of my childhood living in an out-of-place dome house in a forest in Arkansas. My dad grew weed in the backyard and told me it was “smelly okra.”

“Why would she make me go that way?” he asked. “That doesn’t make sense.”
He pawed at a speckled beard. Dry scratching filled the car.
“I’m telling you, Carol,” he said. “We’ve always taken 85 in the past. We always do it.”
“Frank, the GPS says it’s faster, so let’s go that way.”
“Well, she’s wrong,” he barked as the lane departure warning beeped. “You go that way and you’ll have to head down Main Street.”
“It’s all wrong. I don’t recognize this at all.”
The tires hummed a dreary tune as the SUV lurched past boarded-up shops and firework stands marinating in the sticky heat. Shelf clouds lurked behind them.
Our dog lost interest in barking at the humid wind or the smell of fried food it carried. He just whined with half-perked ears whenever we bounced over potholes or roadkill. The fluffy anecdotes and jagged small talk had stopped a while ago. The old pooch was probably scared to speak.
In the silence, we traced the lines of gossip. We mouthed the syllables we’d speak whenever we decided to try again. We nodded to ourselves. Our new words could work.
Luckily, the family was so big we had to break off bite-sized morsels that promised second chances.
Frank sighed at fresh beeps.
“Gotta keep her on her toes,” he chuckled.
We all laughed.
The clouds burst and the rain washed the dust off the car.

At lunch, we bounced off each other as we expanded to fill the space. The children took turns testing currents, stretching invisible tethers until they snapped. Footsteps and giggles wobbled across faux-wooden floors. Squeals rang out periodically. Knees were scraped and faces were slicked with tears.
We stacked the tables with comforting foods and complained about their calories, covering our mouths as we spoke. The air conditioning circulated scents of barbecue sauce and singed popcorn.
We negotiated handshakes and hugs, sorting by gender and familiarity as more molecules filtered in. Occasionally, we’d switch it up and not know why. We drank sweet alcohol from tiny cans we didn’t bother recycling.
We brought leftover words from yesterday’s gathering and placed them between the potato salad and cookies. We’d tried a new recipe and hoped for compliments and accolades.
We were all detectives now.
We held hands and agreed on a prayer before we lined up for food. Some of us kept our mouths shut. Some of us eyed others while reciting the words.
We settled in tired couches, backs groaning as we sat. We spoke about the house and all the work everyone had done on the houses they’d left behind. We complained about the years between visits and counted the seconds until we could leave.

We ran out of rooms, forecasts and promotions and stopped speaking of houses, weather and careers, but kept nodding at silence. We tried our new words and traded clues about others we’d learned on our trip. We bartered and bargained and, in the end, we all felt cheated.
One of the kids pushed another.
“No, Tommy!” Screamed the four-year-old as the toddler crashed on ceramic wood. “That’s my castle and I don’t want you to play with it.”
The tantrum crescendoed. It gave us a reason to say goodbye.

We ate dinner miles away from our hosts at a place we’d never been. The kitsch soothed us with its familiarity.
We all drank our preordained limit in a hurry to sample the newest words. We experimented with honesty.
“All she said was he had some ‘inappropriate behavior,’ those were the words she used,” Carol offered. “I assume that means something… sexual.”
“I think it’s a cry for attention,” provided Frank. “That’s how it’s always been. I’ve dealt with a lot of mentally ill and, well, her behavior is different.”
“It’s such a shame that a church would turn people away,” the other in-law lobbed at me, haphazardly, draining her second drink. “It’s just sad, everyone I know that turned away from God went to a school like that.”
I bit my lip and fumbled for a cigarette. I figured I could stand outside a little longer.
“Honestly, you guys treated me like a criminal when I was growing up,” Maeve answered curious words from Carol. “It fostered a lot of mistrust.”
Then Carol stared down at her greasy basket silently. She gave up on her newest words. Just for today. She’d craft some more and try again tomorrow.
We rushed out the door and wiped at greasy chins and salty lips. We filled the car with silence.

“See, now this looks different,” said Frank, motioning at the windscreen.
We grumbled our agreement. The dog whined. The car beeped.
We tried new words at new houses. We tested others in cars and restaurants.
“It’s hard to see your friend like that,” Frank said, poking at his salmon. “I don’t remember him being that old. It makes you think… maybe… well…”
We drank our limit faster each day. We cheated with stronger drinks and bigger glasses, but never more than three. We danced around our tolerance.
At the gatherings, others would try out their own words.
“How is it now with two kids?” They’d ask the other in-law. “You think you can manage three?”
“We thought we’d try for a girl, but…” she’d say and sigh.
“How’s retirement?” They’d ask Frank. “Are you keeping yourself busy?”
“I’m starting a magazine with Maeve,” he’d say. “And I’ve got my eye on a boat.”
“When are you two getting married?” They’d ask Maeve and I.
I’d have no words and ask to borrow Maeve’s.
So we fought.
We hid behind a corner and screamed in whispers, dredging the salacious depths of five long years together.
We didn’t worry about the words we used. We already knew them. They flowed like blood and wine and stained our clothes and teeth.
Then we held hands, hid our smiles and slipped back into the crowd.