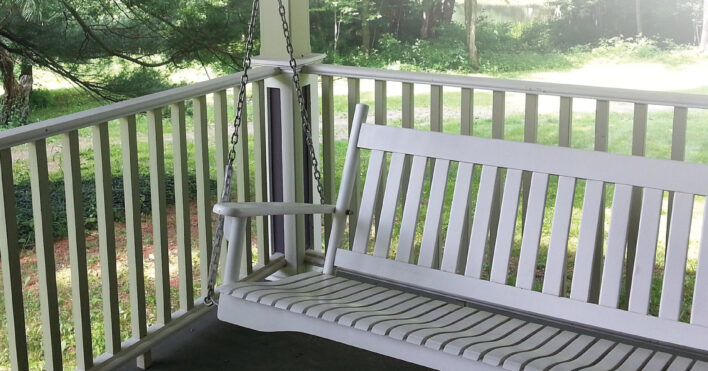 I remember walking from my grand mama’s house with my brother. We’d walkthrough the lane that was in truth a two way, one way street. I mean the signs said one way but cars went both ways and nobody seemed to mind because everybody in Starkville, Mississippi knew that the one way was a two way. The lane contained the most magical delights almost year round. There were pecan trees, peach trees, pear trees, and a long row of sugary sweet honeysuckle vines; and that was just on one side of the road. We never seemed to mind it was all on somebody else’s property. I am sure they didn’t mind sharing with all the kids who walked that lane.

My Uncle Johnny barbequed pork almost year-round, no matter the season, in every type of weather. He cooked whole hogs for other folk’s barbeques and party’s. He owned a little farm, with a cinder block smoke pit in the rear. He would slow cook the hogs for long hours then once the meat cooled he would chop it up, adding grand mamma’s secret vinegar and tomato based spicy sauce. The kids made sure to hang around near enough to be unofficial, official tasters. As much as we tasted it was a wonder there was enough hog left to serve at the party. That chopped barbeque served on white bread with homemade potato salad and collard greens was always a show stopper. Add a little sweet tea, or an ice cold Budweiser, and you were in it to win it!

My other Uncle, on my Momma side liked to brew his own “shine”. That’s moonshine to everyone above the Mason-Dixon Line. He was a bit of a local legend in his day known for his jovial nature and quality of his shine. He even measured a man’s worth in increments of shine. For example, if he said a man wasn’t “worth a fifty cent shot” then you knew that person to be of low character. And who are better judges of character than shine drinking Baptist in Mississippi? My favorite was his muscadine flavored wine. He’d pay his nieces and nephews to collect ripe muscadines by the brown paper bag full; two dollars a bag, good money back in the day. He’d throw the bags in the back of his old Chevy truck and disappear off to his secret place to brew his wine. We children would always be allowed a good nip during funerals, weddings, holidays, or whenever somebody left a jug unattended and in our reach. It was always sweet going down with just the right amount of burn in the throat.

Now you tell me; ain’t I southern enough?

I remember the days of sitting on the high front porch of my house that was nestled in the bow of the circular street that was the inner ring of Curtis Quarters, or “the Quarters” as it was most commonly called. The summer time sun beamed brightly through the puffy white clouds making the skies seem bluer than they already were. I look at my brother as he sits on the porch swing that is attached to the beams that extend the tin roof of the house outward. He is languidly dozing while the swing rocks back and forth on the heated breezes of the afternoon air. His caramel colored skin beads with sweat but he seems not to notice as he absently snorts away the flies at play landing on his face then zoom off as he halfheartedly swats them away with his hand. I envy the momentary respite he has found in the heat of the day.

I tie an unruly shoe string into a tight bow knot on my generic brand sneakers before I push myself off the porch onto the hard pack ground that makes the front yard of my house. I need to find some diversion from my house and the heat of the day. I think my best plan will be to see if I can find some of my cohorts and maybe together we can formulate a plan that will create something fun that hopefully will not include parental or police intervention. Well at least not police intervention anyway.

I dig two quarters from the pocket of my jean shorts, the last of my grass cutting money, and make my way into Langley’s corner store located just a few steps from the asphalt and gravel boundaries that make up the Quarters. As soon as I enter the small store, I shiver from the instant temperature drop caused by the stores’ two window perched air conditioners that are running at full blast. Walking into the sudden chill causes black spots to populate my field of vision. As the over-stuffed shelves comes back into focus, I say hello to Mr. and Mrs. Langley giving them a quick wave of my hand as I turn to the antique red and white Coke-a-Cola floor model cooler that sits in the right corner of the store. I grasp the latch of the cooler and receive an even colder blast of frigid air. With another shiver I reach inside the cooler pulling out a bottle of grape Nehi soda. Turning I go to the counter sliding my fifty scents across the counter towards Mrs. Langley who says “thank you baby” in her sing-song voice then rings her old olive drab green cash register dropping my last two quarters into its coin tray. I tell the Langley’s bye as I pop the bottle cap using the affixed wall bottle opener next to the entry door. I drop the bent cap into a waste can located under the bottle opener. Mr. Langley yells out from the back of the store, “don’t forget to bring the bottle back to redeem it.” “Yes sir” I reply knowing full well that’s one Nehi bottle that won’t be making its way back to the Langley’s corner store any time soon.

I drink deeply of the sweet artificial grape soda; its chilled sugary liquid burns my throat as I take it in with two big gulps. I down half the soda before I’m even ten feet from the store turning left down the lane that runs parallel to the store. I always like this street, named after somebody I didn’t know. Probably some long dead Confederate officer. The street was tree lined with huge birch, oak, and cedar trees that canopied the lane providing shade and dropped the ambient outdoor temperature by a few degrees. I unconsciously slow down my pace a bit enjoying the chill of the soda and the coolness of the lane. I look at the houses tucked away down orange gravel driveways, each painted white with screened in porches and manicured lawns cut so evenly that the grass resembled a diminutive verdant army standing at attention as if awaiting its next set of commands. I wondered if someone was sitting behind those rusted screens watching as I walked along their lane. Soon I’d be standing at the intersection of Gladney and Greensboro Street, on my way to my friends who lived in the Westside subdivisions just across Highway 82, and whatever adventures we could find. Just another hot summer day in the sleepy little town of Starkville, Mississippi.